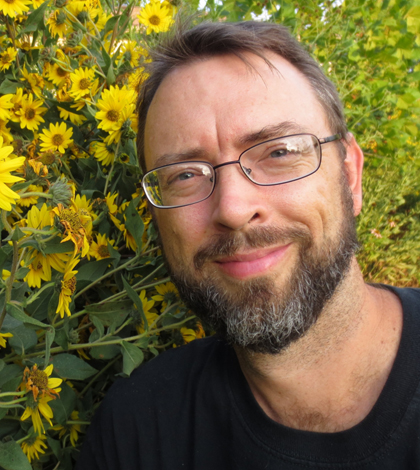 Ryan McEwan, associate professor of ecology at the University of Dayton, is leading several projects in his lab (mcewanlab.org). One is uncovering effects of an invasive shrub on streams, while another is in the works to tackle the city’s stormwater outfalls. He answered a few questions on these ongoing efforts.

Ryan McEwan: The main focus of my lab is a project funded by the National Science Foundation that focuses on how the invasive shrub Amur honeysuckle (Lonicera maackii) impacts streams. This species invades forests and, though there has been a lot of research focused on how this species influences forests, much less is known about how it might influence streams. Small streams that meander through forests are highly influenced by inputs from the terrestrial environment and invasion strongly influences these inputs. We have found that the organisms in the stream are influenced by the presence of Amur honeysuckle and that stream chemistry also changes. Another exciting project we are working on is a collaboration with the City of Dayton, Ohio, where we are looking at urban ecology. In particular, we are working to understand how storm flow coming off the cityscape influences freshwater rivers passing through the urban environment.

The main challenge in any ecological project is getting a handle on the key variables. In our case, flowing water systems have so many potential factors that drive changes in their biology, including both biotic and abiotic factors. Particularly when dealing with headwater streams, which are “flashy” and have changing flow levels through the year along with yearly changes in temperature and the terrestrial environment. We are also looking at nutrients in these shallow streams and it isn’t always clear what is the best technique for measuring those nutrients and what measurements are most relevant to the organisms of interest.

EM: What sort of methods or equipment do you typically use in your work?

RM: We use a suite of methods for stream biology. We use standard kick net techniques to collect benthic organisms, along with collection of biofilms from in-stream substrates to understand biology of streams. We measure stream abiotic and chemical parameters in a variety of ways including field-based probes and lab-based digestion/reagent approaches. We also measure terrestrial conditions using basic forestry techniques and equipment. EM: How are your projects useful in educating students?

RM: Students are a key part of all projects that happen in my laboratory. Undergraduates participate in projects in a variety of ways including very basic tasks like sorting leaves, and more leadership-focused activities. It is normal for advanced undergraduates in my lab to lead projects and become authors on scientific papers. Graduate students are also highly engaged in my projects at both the MS and PhD level. Currently, I have 2 PhD students and 1 MS student working on various projects. These graduate students lead projects but also train undergraduates. Students use the training to propel themselves into environmental careers.

EM: Do you have any results so far that you can share?

RM: One interesting thing we have found is that Amur honeysuckle has effects, both biotic and abiotic, and streams and “restoration” activities that remove honeysuckle, even at small scales, have measurable effects on the stream. Given that the water is flowing, one might expect that if the stream is invaded upstream, then removing honeysuckle in a downstream reach would not have an effect. We found that, actually, even a removal of 200 meters of honeysuckle in the forests along a flowing stream has measurable effects on the aquatic system. There has been a lot of work on “BMPs” for “streamside management zones” in eastern North America, but what our results suggest is that species composition of the riparian forest matters — maybe matters a lot. A big surprise came during one of our Amur honeysuckle removal efforts when we found a considerable volume of woody debris was hanging in the honeysuckle canopy. This debris is a crucial part of stream biology — the idea that an invasive would alter inputs could be a key find.

EM: What sort of studies would you like to embark on in the future?

RM: One exciting idea we have is to treat “outfalls” in the City of Dayton as mini-watersheds and ask questions about how green infrastructure can alter what enters waterways from an urban environment. I was surprised to learn that the City of Dayton (and presumably other cities) have great maps of their outfalls — the pipes where stormwater flowing through the streets enters the river system. Those maps set up nicely for an experimental approach that might mirror something like Coweeta or other hydrological labs where the influence of management practices on stream chemistry and biology are measured at weirs. I am excited to test the influence of green infrastructure in urban environments by taking a “small watershed” approach using these outfalls.