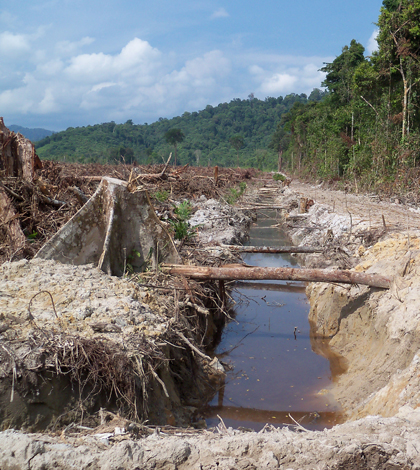 ­Vast swaths of tropical forests across Southeast Asia have been cleared to make room for oil palm plantations, destroying habitat for rare species and releasing carbon dioxide into the atmosphere. A new study adds degraded water quality to the list of effects, showing that the plantations warm locally important streams and cloud them with sediment.

The island of Borneo has been a particularly hot spot for deforestation, losing nearly a third of its forest cover over the past 40 years. Much of that has been replaced by oil palm plantations, which are harvested to produce ubiquitous oil found in products from peanut butter to shampoo.

The region has drawn attention and concern of the global conservation community, though it has mostly focused on the loss of carbon tied up in the forests and habitat for the region’s many endemic species. A study recently published in the Journal of Geophysical Research: Biogeosciences is among the first to look at the effects on Borneo streams, comparing water quality in those running through pristine forests, as well as recently cleared land and mature plantations.

Some of the results weren’t surprising. A stream draining a recently cleared and planted oil palm plantation was nearly 4 degrees Celsius warmer and carried an average of 550-times more sediment than a stream draining an intact forest. That’s an expected, classic result of deforestation, said Kim Carlson, lead author of the study and a postdoctoral scholar at the University of Minnesota’s Institute on Environment. “What we were surprised about was the fact that these mature oil palm plantations, which do appear to be forests when you drive around in them, produced pretty high temperatures and really high sediment loads,” she said. “In fact, their sediment yields, once we controlled for precipitation, were higher than the young oil palm plantations.”

The mature plantations, which Carlson said have nearly full canopies and 20-meter tall trees, also have dense networks of roads for the trucks that pick up the palm fruit during harvests. Those are likely sending sediment into the stream during the region’s regular and intense rain storms, though the study didn’t investigate a specific cause, Carlson said. The streams running through plantations were also worse off than streams running through land used for local agriculture and subsistence farming. Farmers generally clear a few acres of land and plant rice to feed themselves. Following that crop, they might plant fruit trees or let the land go fallow, resulting in a patchwork of land use.

“You can be walking through a beautiful fruit garden with amazing durian trees, and then the next moment you’re in a one-year-old, shrubby area,” Carlson said.

“It could have huge benefits for carbon, but it’s probably still going to have a large impact on water quality,” Carlson said.

That’s important because stream water is a crucial resource for daily life in the region. They use it for drinking water, to bathe and wash their clothes. Fish from the streams are a major source of dietary protein, though the study didn’t trace the effects of temperatures and sediment on local fish populations. Carlson conducted the research while a doctoral student at the Yale School of Forestry and Environmental Studies. She worked under the supervision of Lisa Curran, a professor of environmental anthropology at the Stanford Woods Institute for the Environment with a long history of research in the region. Curran played an important role in setting up Gunung Palung National Park, the site of the study’s pristine forest stream.

Carlson was in the field for around a year setting up the five study sites, and members of the non-governmental organization Living Landscapes Indonesia picked up the data collection after that. Carlson recalled spending up to 8 hours a day on a motorbike, cautiously traversing the park with a YSI 6600 multi-parameter sonde in her pack. They often stayed in villages and got help from the locals with identifying streams that drained the land uses they were interested in.

“We’d either get on a motorbike and drive through a plantation to find the stream or hike for four hours through a forest, complete with leeches and orangutans,” Carlson said. “We couldn’t have done it without the people who actually live [in Kalimantan].”