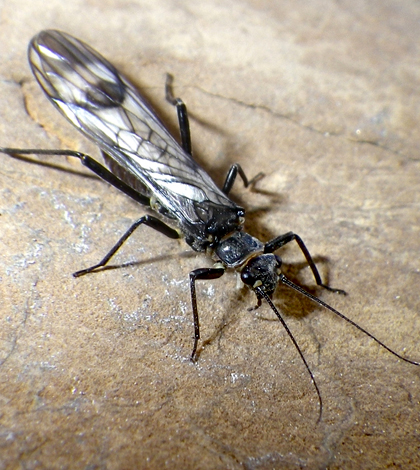 The 25 remaining glaciers of Glacier National Park are projected to melt away by 2030, and a new study suggests a rare stonefly found only in the park could disappear with them.

The western glacier stonefly, Zapada glacier, had previously been found in just six alpine streams within a single drainage in the park. Recent surveys found the stonefly in two previously undocumented locations, but shows it has likely disappeared from five of the six streams known to harbor populations in their cold, glacier-fed waters.

“I spent a lot of time over two or three summers trying to hunt this thing down,” said Joe Giersch, an aquatic entomologist with the U.S. Geological Survey and lead author of the study, which was published in the journal Freshwater Science.

That hunt was in-part motivated by a request from the U.S. Fish and Wildlife Service, which has been petitioned to list the western glacier stonefly under the Endangered Species Act (PDF). The species depends on the consistent flows of extremely cold water supplied by glaciers and other permanent ice masses and snow fields.

But the park is losing those as the climate warms: 125 of 150 glaciers there have disappeared since 1825, and six named glaciers in the drainage home the rare stonefly have experienced “extensive recession” since 1966, according to the study. As those glaciers fade, so to does the ice-cold water needed to sustain Z. glacier populations.

Another contributing factor to the stonefly’s constricting range is how quickly the glacial meltwater warms as it flows away from its source, leaving a relatively short stretch where the water stays cold enough. The streams flow through rocky terrain that was, until a few decades ago, still sitting below the receding glaciers. With little to no bankside vegetation to shade the streams, they’re quickly warmed by full exposure to sunlight in the summer. “That habitable zone — that sort of sweet spot for these species — is very narrow,” Giersch said. “And as the snow and ice recedes, that sweet spot will creep up higher in elevation up to the point where there just isn’t any more input coming from the snow or ice.”

The search for the stonefly in its previously documented range took place over three summers, with researchers beating the bushes with nets or sucking up winged adults from rocks and snow with aspirators. They also collected nymphs from the streams by stirring up the substrate in front of nets that trailed behind frames resting on the bottom. Gierch, who enjoys hiking and carries a stream net and sample bottles in his pack whether he’s out for work or pleasure, also included specimens from his personal collection in the study. Those examples came from streams in the park that weren’t in the species’ known range.

They were on the lookout for stoneflies in the Zapada genus, of which the western glacier stonefly is just one of several species in the park. The species are nearly impossible to tell apart: The adult males have small distinctions in their genitalia, and the nymphs don’t even have that. So the researchers relied on a technique called DNA barcoding to analyze specimens for Z. glacier genetic material.

“I’d pull a couple legs off or I’d pull the abdomen off, and send them in to have the genetic sequences worked up,” Giersch said. The limbs went to the University of Montana, which extracted the DNA, which in turn went to Steve Jordan at Bucknell University for the barcoding work. A spring fed stream in the Two-Medicine drainage of Glacier National Park is one of 2 new locations for the western glacier stonefly. (Credit: Joe Giersch / USGS)

The results of that work showed the western glacier stonefly remains in only one of the original six streams, though it also appeared in Giersch’s samples from two other streams. That doesn’t likely represent an expansion of the insect’s range, but rather new information on a population that had been there all along but no one had found.

“There aren’t a lot of people who have been flipping over rocks up high in the park,” Giersch said.

The U.S. Fish and Wildlife Service will weigh the results as it considers Z. glacier’s candidacy for Endangered Species Act listing, though even if it is listed the agency will have its hands full trying to reverse the threat of global climate change.

So what does it mean for the world to have one less species of stonefly? Even the best-known stoneflies are celebrated for feeding trout, and the western glacier stonefly lives in fishless streams. But to Giersch, it’s less about moving one more name into the “extinct” column and more about the potential loss of whole ecosystems supported by the disappearing glaciers.

“What if this bug does go extinct — this obscure thing that only a handful of people have ever seen? They aren’t fish food, so who cares?” Giersch said. “But it’s not just one species. It’s a whole community.”

Top image: The rare western glacier stonefly is native to Glacier National Park and is seeking habitat at higher elevations due to warming stream temperature and glacier loss due to climate warming. (Credit: Joe Giersch / USGS)