On rare tallgrass prairie, frequent burns may not stop advancing trees and shrubs 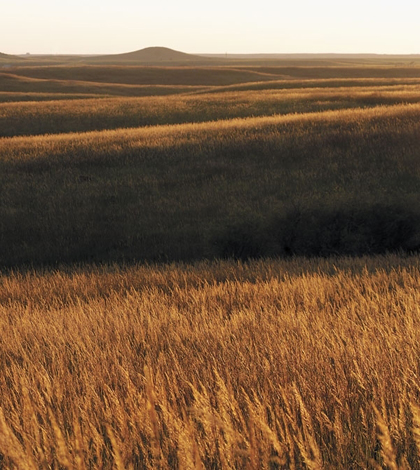 Tallgrass prairie once covered a fifth of the United States but has been reduced to a fraction of that by conversion to row-crop agriculture and the creeping onset of woody plants. That also means change for the streams that run through grassland watersheds, as forested streams surrender more water to bankside plants.

Woody encroachment on grasslands has been studied across the world, but a recent study from researchers at Kansas State University is, to their knowledge, the very first to focus on the spread of shrubs and trees along prairie streams.

The study looked at 25 years of aerial photographs from the Konza Prairie Biological Station, a native tallgrass prairie preserve in the Flint Hills of northeast Kansas. The results show that fire is important in slowing the spread of trees and shrubs along streams, but even fires every one or two years may not be enough to stop or reverse the process.

That leads to some fundamental questions about these shifting ecosystem, according to Walter Dodds, a professor of biology at Kansas State and co-author on the study. An example from Dodds: “If we have expansion regardless of how frequently we burn, how is it that tallgrass prairie even ever existed?”

It clearly did: Records as far back as the Fremont expedition in 1843 indicate that the region supported treeless expanses of prairie. Railroad surveys on the lookout for timber in the 1850s found little out there.

“All those pieces of data just indicate that something fundamental has changed,” Dodds said. Advancing woody vegetation from 1986 to 2006 along a tallgrass prairie stream. (Credit: Walter Dodds)

One thing that may have changed is the intensity of fires. Today, land managers try to maintain fire regimes with prescribed burns. But those are controlled to make sure they don’t go wild and threaten life and property, burning only on days with low wind and humidity.

It’s also possible that the system is recovering from an intense drought — the sort more severe than the Dust Bowl that comes around every 100-200 years. The shrubs may be responding to the system slowly coming out of something that happened in the 1700s and isn’t necessarily in the rainfall records.

The other factor at play here is the climbing carbon dioxide concentration in the atmosphere. The native tallgrass prairie species use a more efficient photosynthetic process than woody plants that allows them to fix carbon without using as much water. That may no longer make much of a differences.

“With increased atmospheric carbon dioxide, its easier for the trees to get their CO2 without losing as much water,” Dodds said. “The competitive advantage that grasses have over the trees is erased by the increased CO2 in the atmosphere.”

Dodds said it’s likely a combination of the changes in fire, drought and carbon dioxide that are fueling the rapid conversion of tallgrass prairies into shrublands and forests, but they still don’t know for certain. A controlled burn on the tallgrass prairie. (Credit: Amy Coffman/USFWS)

The study also looked at how more streamside woody plants affect water yield in prairie streams, but flows and precipitation were so variable that it was impossible to detect a trend. Dodds said they have some experiments underway that will see how removing woody vegetation affects flows. A quick manipulation of the landscape might produce clearer results.

In the meantime, land managers in remaining U.S. tallgrass prairies may have to prescribe burns every one or two years to pause, let alone reverse, the conversation into deciduous forests.

“We have more of that preserved than the grasslands, from the Ozarks to the East Coast,” Dodds said. “It’s basically switching it over to a different ecosystem that’s not as unique.”