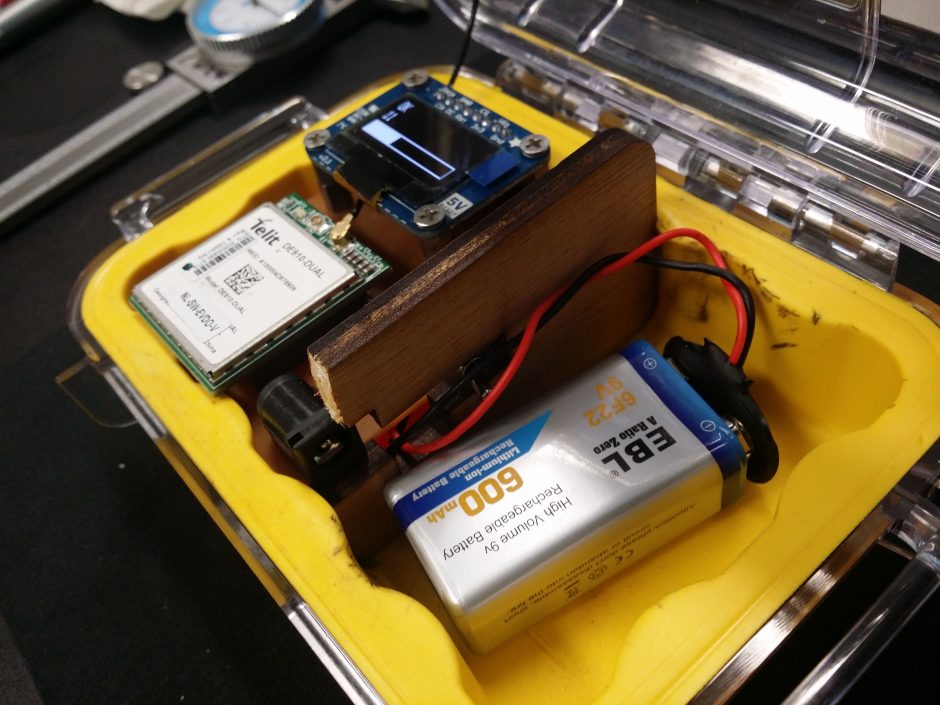 In preparation for a deployment in the Kissimmee River, the team prepares a cellular signal strength tester. The tester is used by the deployment team to map out connectivity quality prior to deployment. (Credit: I-SENSE)

The mission — enable planetary scale in-situ environmental monitoring —  was formidable, but the engineering team that set out to do so ten years ago had one thing going for them.

“We benefited from the fact that we didn’t know what we were doing,” said Jason Hallstrom, a leading computer scientist on the project and currently a professor of engineering and computer science at Florida Atlantic University.

That quip leaves out the team’s expertise in everything from data storage to wireless communications to building low-power platforms. But many of the variables — the sensors, the parameters, the environments — were still a mystery.

“That affected our engineering approach pretty fundamentally because we couldn’t design any of our infrastructure — from the telemetry platforms and loggers to the web portal to the backend and the data management — to a specific instrument or a specific parameter or a specific hardware interface,” Hallstrom said.

The result was a highly adaptable, low-power, low-cost data logger and telemetry instrument, along with an extensive set of data storage, analysis and presentation tools. The tech grew from the test bed of an extensive monitoring network in the Savannah River Basin and the applications have since grown to include a meteorological network and whole-building carbon dioxide monitoring and could just as easily expand to forestry or agriculture uses.

Hallstrom said he and a team at FAU’s Institute for Sensing and Embedded Network Systems Engineering, which he directs, is wrapping up a major overhaul of the technology. The new version, called the Soar, will be released in the second quarter of 2018. It isn’t yet available commercially, though Hallstrom said that is a goal. In the meantime, The Soar platform will be at the core of monitoring and management projects led by I-SENSE, with their municipal and industry partners..

The technology matured throughout an initiative from Clemson University, where Hallstrom held a position until 2015, to install and operate a headwaters-to-port in-situ water quality monitoring system throughout the Savannah River Watershed.

Clemson professor Gene Eidson launched the project, called the Intelligent River, in 2007 with $1.75 million from Clemson Public Service Activities, and the National Science Foundation added $3 million in funding in 2011. But such a large scale project meant the researchers had to squeeze the most out of every dime, and they found they weren’t getting there with commercially available data logging and telemetry products. “Our task was to achieve basin-scale monitoring across the Savannah, and we simply could not afford to do that with traditional technology,” Hallstrom said. “For us, that was our biggest cost driver.”

Part of that was the cost of the off-the-shelf tools. The other problem was how frequently they required maintenance or drained their batteries. That established two of the guiding principles when designing the Soar’s predecessor, the MoteStack: low cost and low power. Ultimately they were deploying MoteStacks for around $100-$150 while the commercial alternatives were in the $1,000-$2,000 range. And the system can operate for months on anything from a lithium polymer battery to a 9-volt.

“We’ve always been interested in designing a system that makes it as easy as possible to deploy a new sensing asset, get that information, back on your desktop as easily as possible, and to push that data into other federal and state repositories and modeling systems,” he said.

To that end, one significant upgrade in overhauling the MoteStack to the Soar was the addition of a low-power display. The earlier version used series of blinking lights to indicate sensor recognition or wireless connections.

“When you send a crew member out in the middle of nowhere without network connectivity to deploy an instrument, blinking lights are not enough,” Hallstrom said. “You can’t neglect the importance of a good user interface in the field.”

The Soar is programmed to open standards so you can connect virtually any kind of sensing instrument to it. Its wireless interfaces are configurable and support cellular, Wi-F, or Bluetooth. They’ve also developed their own cloud infrastructure, web services and presentation tools. The need for strong diagnostic tools became clear once they began installing monitoring stations hours away from campus. Occasionally a sensor would stop reporting and they wouldn’t know whether the custom enclosure had grown too humid or a snapping turtle had bit off an antenna. So they designed dashboards that report on all aspects of sensor performance and communications and can provide real-time quality assurance and control against specified standards

“When we have problems with our instruments, we get email alerts saying ‘Hey, there’s a problem with this instrument that’s not reporting correctly, we need someone to go fix it,’” Hallstrom said. “That’s really helped us to optimize the system over time and optimize scarce resources.”

The next big deployment of the technology will be an atmospheric monitoring network along the Atlantic Coast. Hallstrom’s group will work with Coastal Carolina University, which is funded through NOAA to expand monitoring to support weather forecasting and modeling.

Stronger tropical storms in the Atlantic are growing more common, and the National Weather Service is focusing on improving flood forecasting and preparedness. To do that, a Soar-based monitoring network will provide better in-situ data for forecast modeling work at Coastal Carolina.

After a decade of work on the tech, the easy transition from a basin-scale network of underwater sensors in the Savannah to a network of meteorological sensors mounted on cellular towers is the upside of not knowing what they were doing when they started.

“In the end that helped in a profound way because the hardware platform and the software systems that we used to build out a water monitoring network are effectively identical to the tools that we used to deploy an atmospheric monitoring system,” Hallstrom said.

Top image: In preparation for a deployment in the Kissimmee River, the team prepares a cellular signal strength tester. The tester is used by the deployment team to map out connectivity quality prior to deployment. (Credit: I-SENSE)