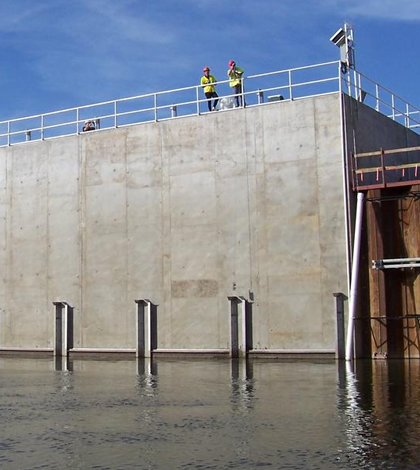 Efforts to recharge the Equus Beds aquifer, one of the primary water sources for Wichita, Kan., had spurred concern that doing so could hurt its water quality as well as that of the Little Arkansas River connected to it. But data gathered by U.S. Geological Survey (USGS) scientists since recharge activities began in 2007 show that the quality has gone fairly unchanged.

Researchers with the USGS studied water quality two years before and after the second recharge phase began, in April 2013. Using water quality sondes, flow trackers and other gear, they examined water chemistry, biology and habitat health of the Little Arkansas River, as well as the water quality of groundwater in the Equus Beds aquifer.

Their results, all of which are available online in this report, show that the Equus Beds Aquifer Storage and Recovery project didn’t substantially impact water quality. The finds are useful for helping the City of Wichita make informed water management decisions.

“… Most of the small changes observed in surface and groundwater quality were largely governed by streamflow and precipitation, rather than activities related to the City of Wichita’s aquifer storage and recovery efforts,” said Scott Macey, City of Wichita water resource engineer.

In 2007, the City of Wichita began to artificially recharge the aquifer with treated storm runoff water from the Little Arkansas River or bank storage wells along the river. The second phase of the project started in 2013, which includes runoff being treated to meet quality standards for drinking water before recharging the aquifer through wells or recharge basins. After the water is treated at a facility, the residuals, or things removed from the water, are returned to the Little Arkansas River downstream of the facility in adherence to Kansas Department of Health requirements. And because of the dilution that takes place, there are no significant differences in the quality of the river water downstream of the treatment facility.

Investigators say that the health of macroinvertebrates showed similar quality on both sides of the facility. Fish communities also fared well.

After the recharge program began, scientists did note that there was a small increase in concentrations of some constituents in groundwater, like chloride, arsenic, phosphorus and carbon. But all of those came below drinking water standards. Levels of nitrates and bacteria actually went down.

USGS scientists plan to continue efforts to monitor Equus Beds groundwater in the future. They are particularly interested in water level changes and fluctuations in its storage capacity.