Reconstructing Past Ocean Temperatures with Samples of Antarctic Ice 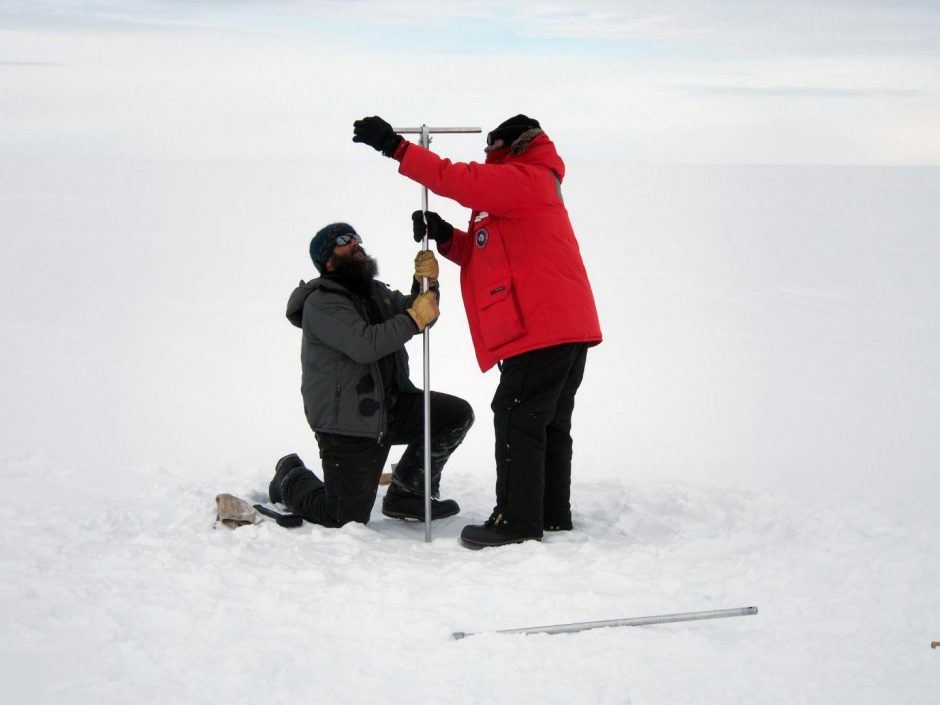 Part of the secret to knowing just how much Earth’s oceans have warmed as its climate has changed in the past—and might change in the future—might be locked in the ice of Antarctica. A research team has discovered a way to use noble gas ratios to calculate the average temperature of the oceans of our past.

Geoscientist and study author Dr. Jeff Severinghaus and teammates from Scripps Oceanography and other institutions in Japan and Switzerland worked together on the tricky problem of measuring ocean temperatures of the past. Until now, the distribution of different water masses around the globe has made determining changes in the average temperature of the world’s oceans nearly impossible. Every layer of water can exhibit temperatures that are drastically different, so calculating any average across the ocean’s depths and vast surface is a challenge.

The team decided to determine ocean temperatures indirectly, by calculating the ratio of atmospheric noble gases, which directly relate to the temperature of the world’s oceans.

“Charles D. Keeling’s pathbreaking measurements of atmospheric CO2, made in a single location, provided the inspiration for our noble gas mean-ocean-temperature method,” explains Dr. Severinghaus. “The power of making a single measurement from the well-mixed atmosphere is that it captures the cumulative impact of all of the multitude of local processes over the Earth’s surface, which would be impractical to measure individually.”

For climatologists, the inability to accurately measure past ocean temperatures has long been a problem. Without precise data, it’s difficult to show the effects of climate change.

“Noble gases in some sense are a natural complement to Keeling’s famous CO2 record,” details Dr. Severinghaus. “The CO2 causes global warming; the noble gases record the major effect (as 93% of the extra heat from global warming goes into the ocean). So cause and effect can be shown in the same graph, making a powerful teaching tool.”

The team sampled ice in Antarctica to measure values of the noble gases krypton, argon, and xenon in air bubbles trapped within the ice. We already know that krypton and xenon are released into the atmosphere as oceans warm in quantities that have already been determined. Therefore, the ratio of these three gases in the atmosphere allows scientists to calculate the average temperature of the world’s ocean.

The team took cylindrical samples of ice 3.7 meters in length using a drill over their six years in Antarctica. They took their final sample in 2011, at a depth of 3,405 meters. The samples the researchers took span almost 100,000 years. Analysis of the air in the bubbles provides a global average, because it takes several weeks to months for Earth’s atmosphere to mix. The team collected data in increments, allowing them to separate results in 250 year segments, as they worked mostly with samples 8,000 to 22,000 years old. “The ice cores were being drilled to understand how the Earth’s climate system works, and how it will likely change in future centuries,” Dr. Severinghaus states. “Specifically, we wanted to know if humans might trigger an abrupt climate change event, which have happened in the past. Also, the ice cores reveal past atmospheric CO2 and methane concentrations, which tell us about the cause of past climate changes, and help sharpen our knowledge of the sensitivity of the Earth’s climate to these gases.”

The team subjected the samples to a range of processes to measure the gases.

“We use mass spectrometry to measure noble gases, which is a well-known analytical technique, with some custom enhancements to boost precision,” clarifies Dr. Severinghaus. “The ancient air is separated from the ice by melting the ice samples in a vacuum, and purifying the noble gases by exposing the air to a “getter”—a hot piece of metal made from a mixture of zirconium and aluminum that eats up all the gases except the noble gases.”

Now, thanks to the techniques developed in this research, new insights into drastic periods of climate change that occurred long before humans started to contribute to the problem are possible. Notably, the researchers found that at the peak of the most recent ice age the average global ocean temperature was 0.9 ºC (33.6 ºF). Today, the average ocean temperature is 3.5 ºC (38.3 ºF).

Implications for the future

In the future, scientists anywhere should be able to take samples of the atmosphere and measure noble gas ratios to determine ocean temperatures. Severinghaus and colleagues from various institutions are working to perfect the technique.

“At present, we lack the instrumental precision to apply this noble gas method to current warming, but we can use it for now with ice cores to study past warming over longer time scales, and compare with the CO2 records obtained from those same ice cores,” Dr. Severinghaus adds.

The practical result of more accurate reconstructions of ocean heat content matters, because one of the biggest unknowns in predicting future climate is “climate sensitivity,” which reflects how much the Earth’s surface temperature rises for a given increase in greenhouse gas.

One of the main surprises of the research for Dr. Severinghaus and the team is the close dovetailing of Antarctic temperature and global ocean temperatures.

“The main surprising thing that we found is that the world’s ocean temperature seems to track Antarctic temperature very closely,” Dr. Severinghaus comments. “This suggests that most of the ocean volume is ‘processed’ through Antarctic coastal waters, if only briefly, so that the water takes on the temperature of the air around Antarctica. We’re not yet sure what this means, but it is an important finding and we’re all scratching our heads right now.”