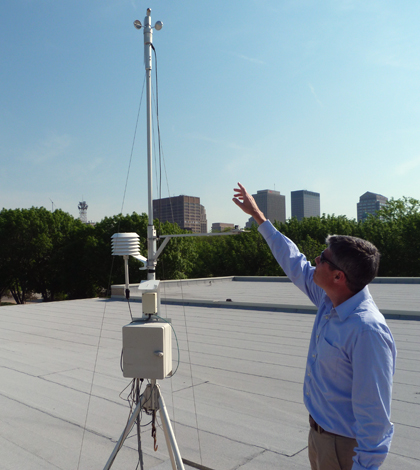 Across the Buckeye state, the Ohio Environmental Protection Agency works with district offices, health departments and contract agencies to monitor the state’s air quality. Monitoring approaches in each area is overseen by the Ohio EPA’s partner there.

In Dayton, Ohio, the partner in charge of monitoring air quality for the Ohio EPA is the Regional Air Pollution Control Agency (RAPCA), which oversees 11 sites in five counties surrounding the city. The Environmental Monitor recently visited a few of RAPCA’s monitoring sites to see how the agency carries out its mission and to get an update on issues affecting the city’s air quality.

Specialists at RAPCA focus on six pollutants in their work: ozone, particulate matter (PM), carbon monoxide, sulfur dioxide, lead and nitrogen oxides. Many of the organization’s sites have monitors for particulate matter and ozone, while those for the other pollutants vary depending on site location. Cellular modems at each site send the data back to air pollution controllers at RAPCA throughout the day. The figures are shared online through RAPCA’s website and the Ohio EPA’s AirOhio site.

The pollutant of most concern is PM 2.5, comprised of very tiny dust particles, car emissions or even liquid droplets, that is easy to breathe in. To measure that, as well levels of larger-particle PM 10, specialists at RAPCA use PM monitors that run continuously. “We monitor PM at four sites. Preble County – that’s our NCORE site. We have monitors in Yellow Springs and in Springfield,” said Brian Huxtable, air pollution control specialist, in an interview at RAPCA’s downtown Dayton office. “Monitors sit there and then we have a Partisol (PM monitor) at the Sinclair Community College site.”

Also at the Sinclair site is a speciation monitor that goes a step further by analyzing the components of the particulate levels being measured.

In the summertime, he says the speciation monitor will pick up more sulfates. But when things cool down in the winter, the portion of nitrates goes up. Much of the reversal is due simply to the drop in sulfates relative to nitrate levels, he says. Summertime sulfur levels have also benefited from tighter regulations on emissions from power plants and coal burning. An air quality monitoring platform managed by the Regional Air Pollution Control Agency sits on the roof of an abandoned firehouse in Moraine, Ohio. The station is part of the Ohio EPA’s air monitoring network and includes sensors for tracking lead and particulate matter. (Credit: Daniel Kelly)

“The Ohio River Valley is loaded with coal-fired boilers and they’ve been shutting them down, controlling them more, switching them over to natural gas,” said Huxtable. “We’ve seen sulfate emission inventory levels just bottom out.”

With sulfate emissions down significantly, that has transferred over to lower PM 2.5 levels around the Dayton area because sulfate is a part of the particulate measurement. Still, PM monitors downtown pick up higher levels simply because there is more activity there.

As RAPCA moves forward with its monitoring work, the organization will continue to operate in accordance with air quality standards issued by the Ohio EPA and most of the air monitoring will focus on the six main pollutants. In addition, RAPCA will keep monitoring for pollen and mold levels at its downtown site to provide allergy sufferers with real-time measurements of what’s floating in the air.

All data collected are easily accessible for researchers who want to use them for scientific study, says Huxtable. And findings routinely inform recommendations on air quality policies in Ohio and nationwide.