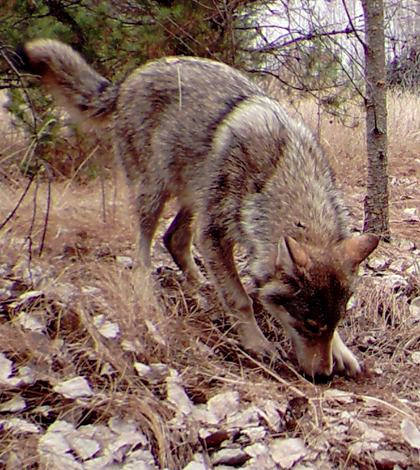 A pack of wolves visits a scent station in the Chernobyl Exclusion Zone. The photograph was taken by one of the remote camera stations and was triggered by the wolves' movement. (Credit: National Geographic / Jim Beasley / Sarah Webster)

Everyone knows what happened at Chernobyl. Just mentioning the name of the Ukrainian nuclear power plant is enough for people to envision the accident and the damage that its meltdown brought.

Not surprisingly, humans aren’t allowed to venture into the area surrounding the site, the Chernobyl Exclusion Zone (CEZ). The restricted CEZ encompasses the bordering lands of Ukraine and Belarus impacted by radiation fallout from the accident, which occurred April 26, 1986.

But there are no restrictions on the movements of wild animals nearby. Back in 2015, a study relied on the presence of track marks to estimate the animals living in the area. Following up on that, scientists at the University of Georgia have completed a study using cameras to confirm if that first investigation’s results were reliable.

The camera study, results of which have been published in the journal Frontiers in Ecology and the Environment, is the first remote-camera, scent-station survey conducted within the Chernobyl Exclusion Zone. The study’s findings document species prevalent in the zone and support the earlier findings that animal distribution in the area isn’t influenced by radiation levels.

The previous study, published in fall 2015, determined that wildlife populations were thriving in the CEZ by counting animal tracks. But scientists at the University of Georgia used a more modern research tool — remote camera stations — to back up the findings of that older study.

Researchers set up the cameras using a systematic approach across the Belarus section of the CEZ. There were 94 total study sites, using 30 cameras, and the investigation spanned a period of five weeks. A pack of wolves visits a scent station in the Chernobyl Exclusion Zone. The photograph was taken by one of the remote camera stations and was triggered by the wolves’ movement. (Credit: National Geographic / Jim Beasley / Sarah Webster)

The remote cameras were set up on trees or tree-like structures over the course of seven days at each location. At each station, some sort of fatty acid scent was added to help attract animals for consideration. To avoid the likelihood that some animals would venture to multiple stations within any 24-hour period, scientists deployed the cameras at least 2 miles apart.

From there, researchers documented all the wildlife species that they saw on the cameras, as well as the number of times that animals visited. A special focus was given to carnivores, which scientists think are at elevated risk of receiving radiation contamination because of their positions in the food chain. There is also a relative lack of data on the effects that Chernobyl contamination has had on species in high trophic levels.

The research team found 14 species of mammals on the camera footage. The most frequently seen were the gray wolf, Eurasian boar, red fox and raccoon dog, a canine species found in East Asia and Europe. All of the species were spotted at stations close to or within the most highly contaminated areas.

The results of the camera study show that wildlife populations aren’t suppressed in even some of the most highly contaminated areas of the CEZ. Regardless of that aspect, scientists say that the animals seemed more likely to be where they could most easily find food and water that they need to survive.