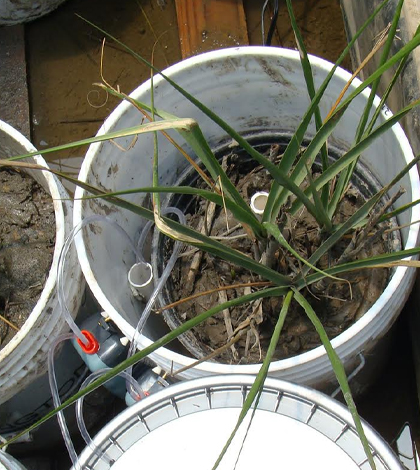 Studying an ecosystem usually requires either a foray into the field or a convincing, reliable simulation. Field studies can be hampered by difficult weather, terrain or travel costs, and useful simulations are often complicated and expensive. One graduate student from Georgia Southern University redefined the standard by building a tidal salt marsh microcosm with two hardware store buckets and an aquarium pumping system.

“I was inspired to construct and test this tidal simulation method as a way to examine the effects of excess water column nutrients and salt on smooth cordgrass nutrient uptake augmenting Sapelo Island National Estuarine Research Reserve’s salt marsh buffer project,” said Rachel MacTavish, a graduate student in GSU’s Department of Biology. She and co-author Risa A. Cohen conducted a study detailing the system’s efficacy that was published in the scientific journal BioOne.

MacTavish needed “an inexpensive, accessible and space-conserving method” of replicating tides in a salt marsh for her study. She considered field-based methods and traditional tidal simulators before taking matters into her own hands. For less than $27, she built and tested her own self-contained simulator with two buckets, pumps and aquarium tubing — all with a footprint under two square feet. One bucket contained a cordgrass specimen (the salt marsh microcosm), while the other served as a water reservoir. The first pump brought water from the reservoir into the microcosm, and the second transferred water back into the reservoir. A programmed timer initiated this “tidal exchange” every 6 hours. The simulators allowed for the growth of Spartina alterniflora, or tidal cordgrass, and seemed to realistically replicate tidal flushing and nutrient uptake. But to be certain, the researchers would have to compare their bucket-based solution to the real deal. So they took a trip to Sapelo Island to compare growth of the cordgrass in natural field plots with the specimens in their simulator.

Working on the remote island was “a unique opportunity than can present challenges like transporting research supplies to the island by ferry,” MacTavish said, adding that she also had pleasant experiences, such as “watching the fiddler crabs ‘wave’ to each other as I was measuring smooth cordgrass shoots.”

But the effort paid off, showing that there was no difference in growth between the simulator and the naturally grown cordgrass. In other words, a couple of buckets made for a convincing salt marsh ecosystem.

While MacTavish doesn’t currently have any plans to use the tidal simulator for future research, her design has already been appropriated by one of her colleagues at GSU to study the effects of sediment concentrations on tidal cordgrass growth. In theory, the inexpensive, contained design of MacTavish’s simulator will make research on one of the world’s most threatened ecosystems more accessible than ever before.