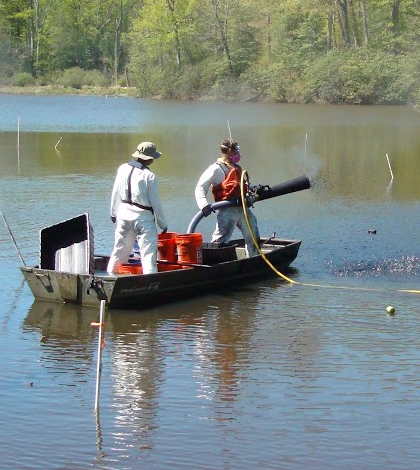 In 1979, U.S. Congress banned the production of polychlorinated biphenyls, or PCBs, a class of synthetic organic chemicals used in various industrial applications, from coolants to adhesives.

The versatile chemicals were found to be potent animal carcinogens and classified as persistent organic pollutants. By the time the ban was established, however, poor disposal techniques practiced by companies such as Monsanto and General Electric had already created environmental hazards at certain sites, perhaps most notable among them being the Hudson River Superfund site that GE is still dredging.

Employing naturally occurring microorganisms, scientists at the University of Maryland have developed an inexpensive and environmentally sound method that can remove PCBs from sediment with 80 percent efficiency over the span of a few months. The development marks a major advancement for PCB remediation technology, as earlier cleanup techniques depended on costly, time-consuming dredging operations or less effective sediment burial.

“PCBs have long been an issue, especially since the discovery of high PCB levels in the Hudson River,” said Kevin Sowers, associate director of the Institute of Marine and Environmental Technology and professor at the University of Maryland, Baltimore County.

“This research started 20 years ago,” he said. “We started at a time when people couldn’t identify the anaerobic microorganisms that broke down PCBs.” Scientists knew that certain bacteria living in aquatic sediment could help break down the toxic chemicals, but couldn’t isolate those species from the myriad others present in the same sediment.

Sowers and his peers spent years using molecular analysis to identify, isolate and finally characterize the microorganisms capable of breaking down PCBs in the environment. They found that the process required two types of bacteria: anaerobes to remove chlorides from the chemicals, and then aerobes to break them down completely.

Only in the past few years, Sowers says, have scientists understood these organisms well enough to raise them in a lab setting in great enough quantities for practical applications. The IMET researchers grew the bacteria in 250-liter fermenters, Sowers said, a process that took several months initially, but one that they’ve sped up by a large factor since. Now, Sowers notes, the researchers can grow the microorganisms in a pure culture, producing developed bacteria colonies within 30 days.

“When anaerobes dechlorinate the PCBs, they grow very slowly,” Sowers said. “They make a very poor living by doing that, but they have no competition. To them, that’s fine.”

Even after successfully identifying, isolating and raising cultures of the bacteria needed to break down PCBs, the researchers faced one last hurdle: deploying the bacteria into the environment. It was already known that activated carbon could bind with and sequester — but not eliminate — PCBs in aquatic sediment. Using a pelletized form of activated carbon called SediMite, Sowers and his team created a delivery system packing a one-two punch.

“Benthic organisms carry (the pellets) up and down through the sediment,” Sowers said. “The carbon particles absorb the PCBs and our bacteria then breaks down the PCBs.”

So far, the researchers have mostly tested their new technology in a lab setting. They treated two-liter tanks filled with contaminated sediment using bacteria-equipped SediMite, and saw 80 percent degradation of PCBs between 90 and 180 days.

In an initial field test, the researchers deployed their technology at a PCB-contaminated sewage pond in Altavista, Va. There, only part of the site was treated and results came a little slower than in the lab, but researchers again reported an 80 percent reduction in PCB concentrations within two-and-a-half years.

Sowers notes that the bacteria seem to break down PCBs very quickly at first, and then slow down, but continue to work, over the following months and years. He said that 100 percent degradation may be possible, but “that’s one of the things we’ll have to wait to see.”

Besides, he says, 100 percent degradation might not even be necessary with new technology. “PCBs stick to activated carbon tenaciously,” Sowers said. “Even if we’ve only achieved 80 percent (degradation), we’re still using the activated carbon to bind the remaining PCBs and keep them out of the food chain.”

The IMET researchers are now seeking study sites where they can continue to refine the technology and demonstrate to stakeholders, regulators and the public that the new methods truly provide a safe and efficient means of eliminating PCBs.

“We’d like to get as many pilot studies as possible, collect all the data for those studies,” Sowers said. “Our final challenge, of course, is getting this to work in the environment. There may be some things we need to change.”