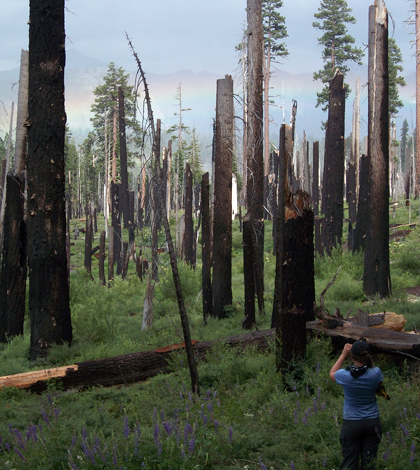 Researchers from the University of California at Berkeley are figuring out when it comes to forest fires, sometimes you’ve just got to let it burn.

Gabrielle Boisramé, a hydrologist with the university, and a team of fellow researchers wanted to figure out if the standard practice of fire suppression would have any impact on the flow of water through the forest.

To do so, they used the Illilouette Creek basin of Yosemite National Park as the setting for a natural experiment. In that specific plot, when lightning strikes on dry, hot days and starts a fire, land managers let it burn out on its own, rather than suppress the blaze. Park employees adopted this practice in the area in the 1970s and have stuck with it since then.

Boisramé said it turns out that the forest fires actually lead to a healthier treescape, increased water flow through the woods, and increased streamflow through the Merced River. Researchers compared data from the burning forests against their fire-suppressed counterparts, and soon realized the importance of fire on some forests’ ecology.

“We started noticing that there were a lot of areas that burned had been deforested, but now there seems to be a lot of wetland vegetation and a much moister environment than you would suspect,” she said. UC Berkeley students Katy Abbott and Isabel Schroeter (on the log) hike through a burned site toward the next measurement plot. (Credit: Gabrielle Boisrame)

Comparing their measurements to historical data from the U.S. Geological Survey, Boisramé said the results are suggesting that after fires burn, the trees left standing have more room to grow and less competition for water in the soil, making for healthier trees. Likewise, the more moderate fires burn up deadwood that could serve as a fuel source for a more severe fire, pending on how much of it builds up.

She said wildfires have been occurring for thousands of years, and at this point are part of the natural system.

“The ecology there is really adapted to having these fires coming through periodically, thinning things out and refreshing everything,” she said.

Along with water, Boisramé said she and her team also measured how the fires would affect the hydrology of the area in the snowy wintertime.

In that regard, she said more snow builds up in areas that have burned, which means water for the plants when it thaws around springtime.

“When you have dense trees, then that melts the snow away,” she said. “Plus, snow ultimately gets stuck in all the branches and never makes it to the ground.” Despite its positive impacts in Northern California, Boisramé said letting fires burn is not a cookie-cutter solution for every wooded area. She said while the area she studied is built to handle forest fires, a fire in Southern California shrublands could be devastating if it weren’t suppressed, due to the ecology’s sensitivity to fire and some of the densely populated cities in its vicinity.

However, in some situations, Boisramé said it can be wise to intentionally start a fire on a milder day in forests to prevent fuel buildup from leading to an unrestrained inferno.

“Prescribed can do a lot of the work of a natural wildfire by thinning things out and removing the fuel loads so that future fires won’t burn quite as hot and be as destructive,” Boisramé said.

Now that the natural experiment has finished, Boisramé is working with her team to create a computer model of how burns affect wooded areas to see if there’s any causation, or just a correlation.

Along with Boisramé, Sally Thompson, Scott Stephens, and Maggi Kelly of the University of California Berkeley and Brandon Collins of the U.C. Berkeley Center for Fire Research and Outreach assisted with the research.