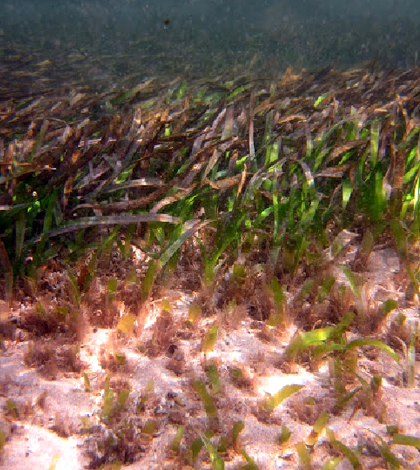 Sometimes stretching for miles along the ocean floor, seagrass beds can resemble terrestrial meadows and serve as habitat to a variety of marine species, from fish to turtles to mollusks.

Researchers from Radboud University Nijmegen in the Netherlands have discovered that these productive ecosystems are also great indicators of trace metal pollution in coastal regions. Their findings are published online ahead of print in Environmental Pollution.

“We realized that a global benchmark for trace metals in seagrasses was completely lacking, which is quite essential when you are doing trace metal research,” said Laura Govers, lead author of the study and post-doctoral student at Radboud University Nijmegen. “That’s why we compiled this benchmark, which may be generally used for future research.”

The study examined the usefulness of seagrasses as bioindicators on a global and local scale. To establish a global benchmark, the researchers conducted a meta-analysis of scientific literature from around the world. Additionally, Govers said the meta-analysis incorporated “unpublished personal results from Mauritania, Indonesia and Australia.”

Sampling at six bays on the Caribbean islands of Bonaire and Curaçao provided data for the localized portion of the study. The researchers gathered seagrasses as well as porewater and surface water from each bay, mostly snorkeling to collect the samples. After collection, water samples were categorized and frozen, while the plants were split up by part and dried using a rice cooker. The researchers used a rice cooker to dry seagrass samples in the field. (Caption: Laura Govers)

Each bay provided a unique environment for field work, Govers said. At Sint Anna Bay, the researchers found no trace of seagrasses, as its waters had been polluted by a nearby oil refinery. Another bay, Boka Ascension, showcased a split personality: Green sea turtles grazed happily on seagrass in one half of the bay, while the other half was so heavily polluted that the researchers had to penetrate layers of dirt and industrial grime to take samples.

One bay in particular, Govers said, gave the researchers a pleasant surprise.

“Sint-Joris Bay on Curaçao is fairly remote and is known for drug trafficking, so we were a bit afraid to encounter disreputable people there,” she said. “But instead we encountered a whole bunch of Marines, training with boats and running through the water, which was pretty funny.”

Compiling a global benchmark for trace metal pollution in seagrasses was the study’s “most important finding,” Govers said. “Additionally, we emphasize that seagrass leaf trace metal concentrations can globally be used as a relatively simple way to detect and estimate trace metal pollution.” She noted that the method is relatively inexpensive, and could be most beneficial in developing countries where resources are slim and only made slimmer by the impact of pollution on coastal ecosystem food webs.

“We hope that [governments and natural resource managers] will use our study and methods to start sampling and analyzing seagrasses on a wider scale,” Govers said. “The results of such a study may further be used for management and policy making.”