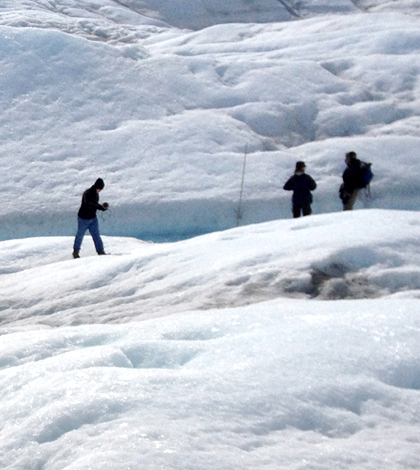 While the scientific community has formed its consensus on how ice sheets are shrinking in and around Greenland, some researchers are tracking what happens to the meltwater as it drains into the ocean each summer.

Their study, published in Nature Geoscience by an interdisciplinary team of biologists, oceanographers and hydrologists, used computer models to simulate the meltwater to see where currents take it and what effect it could have on the ocean.

Renato Castelao, one of the researchers and an associate professor of marine science for the University of Georgia, said one of the biggest discoveries of the study was the surprising final destinations of the ice sheets as they melt into the ocean each summer.

He said the meltwater from the southeast end of the country flows west under its southern tip ending up in the Labrador Sea, between Greenland and Canada. However, water from southwest Greenland tends to head north into the Baffin Bay.

Another critical finding, he said, was that different glaciers are comprised of hugely variable compositions of phosphorus, nitrogen and other plant stimulants. Because meltwater is lighter than the salty ocean water, it can spread broadly, altering the productivity of the parts of the ocean it reaches.

Hence, shrinking ice sheets in different ends of the country can alter the productivity of distant ocean areas. The researchers tracked the meltwater using a computer model they built with data from known ocean currents, satellites, ships and buoys, similar to how meteorologists forecast weather.

After verifying the model’s results against the researchers’ own observations, Castelao said they added a dye to the simulated meltwater as it entered the ocean, and tracked its progress as it flowed.

With findings in hand, Castelao said the next step for the scientists is to figure out how to use their models as a predictive resource when ice melts.

“We saw there’s this big difference in the fate of water from one region to another,” he said. “What we’re trying to understand now is why that is; What are the mechanics that drive these differences? This is what will give us predictive capabilities.”

He added he would also like to conduct more research into how the different nutrient compositions of the meltwater from different ice sheets affect the biology of the pieces of the ocean they reach.

Top image: Researchers stationed in Greenland tracked the fate of glacial meltwater as it wormed its way around the island nation to determine effects on productivity.