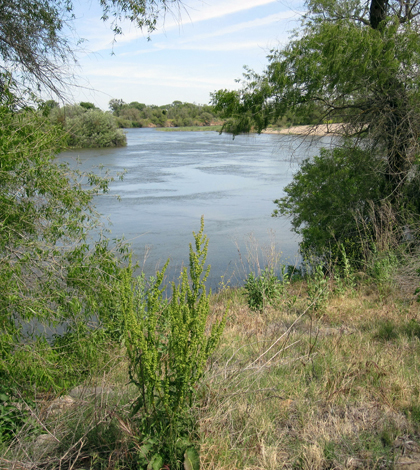 The San Joaquin-Sacramento River Delta is a highly engineered, webbed expanse of streams and sloughs where flows are controlled by dams and rivers are often confined to their channels by levees. The Delta, where the two rivers meet before flowing into San Francisco Bay, is also an ecosystem in decline.

Many of the system’s fish are dying off, and it’s not clear why. One contributing factor is likely habitat loss, especially where structures prevent waterways from overtopping their banks and creating intermittent, shallow habitats important to the system’s threatened, endangered or otherwise declining fish species.

Over the past decade, wildlife agencies and conservation activists have explored restoring floodplains by breaching or moving levees and reconnecting the lands to the rivers. But a recently published study highlights that opening the door for the rivers to once again inundate their floodplains doesn’t mean that water levels will rise high enough to flow through.

In the past, floodplains were largely relegated to a line on a map designated by the Federal Emergency Management Agency that determined who had to buy flood insurance, according to Mary Matella, a Sea Grant fellow with the California Coastal Commission and lead author of the study.

“That static line isn’t really as meaningful when you’re talking about a functional, biological, ecological system that depends on a floodplain to be dynamically inundated,” Matella said.

As floodplains have become increasingly recognized for the value of the ecosystem services they perform — whether providing fish habitat, or even water storage or flood mitigation — the need has grown for tools to help water and wildlife planners to describe the benefits and results of restoration efforts. Chinook salmon were one of the two fish species considered in the study (Credit: Dan Cook/USFWS, via Wikimedia Commons)

While a doctoral student at University of California Berkeley, Matella developed a method to quantify just how much floodplain habitat would be created by a particular restoration. The research published recently in River Research and Applications is a case study that applied the method to several potential floodplain restoration projects on a reach of the San Joaquin River to determine how much habitat they would create for Chinook salmon and splittail–two of the Delta’s declining species.

The study considered one project that would set levees farther back along a stretch of the San Joaquin, and another that would create a bypass channel. The method takes into account the bathymetry and topography of the area, as well as the timing and duration of floodplain inundation that Chinook salmon and splittail depend on for spawning or rearing.

By simulating the restoration’s effects on the landscape and applying historical flow data from the San Joaquin, Matella found that only 13 flood events in the past 80 years would have brought water levels high enough in the right season for a long enough period of time to create the habitat required required by the fish species in the restored area. Splittail, a minnow in decline in the delta, were also part of the study (Credit: USFWS, via Wikimedia Commons)

The results make it clear that removing the physical barriers between rivers and floodplains doesn’t necessarily mean habitat has been created. It also shows the effects of flows tempered by the more than 80 dams in the San Joaquin watershed.

“If you set the levees back and you create all this floodplain but there’s not enough water there, then you haven’t restored the floodplain for the fish,” Matella said. “If the actual flows are still altered, you’re not going to actually achieve real restoration.”

Beyond the scope of this case study, Matella said the method that she used could help restoration planners pick which projects would be the most beneficial. Colleagues in the field are also using a similar approach to investigate whether some agricultural land could be planted in some years and opened as floodplain habitat in others.

“When you’re trying to restore as much habitat as possible, people are looking at ways of collaborating and not just saying “this land is fenced off and its for fish and plants only,'” Matella said. “The exciting part is trying to think about multiple benefits from the same landscape. But this is just one step toward that.”