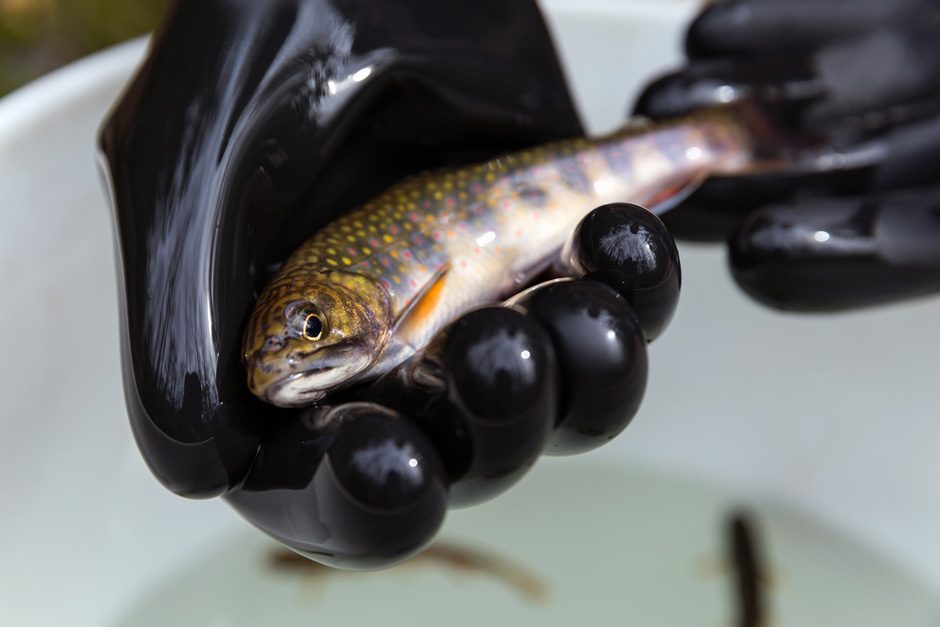 The North Carolina Wildlife Resources Commission’s Inland Fisheries Division has been working to restore brook trout in the state. Coldwater research coordinator Jacob Rash, who works with the brook trout team technicians on this project, spoke to EM about the work.

“In North Carolina, brook trout are our only native trout species,” explains Mr. Rash. “With that come biological and ecological considerations as well as cultural importance. A lot of folks here grew up fishing for brook trout with their relatives, so it’s an important species that we work to try to conserve. We’ve done quite a bit of work to figure out where those brook trout populations are and what they are, in terms of genetics.”

The teams capture brook trout using electrofishers and nets, and then measure them and collect samples of their DNA. This process is part of a larger ongoing effort. 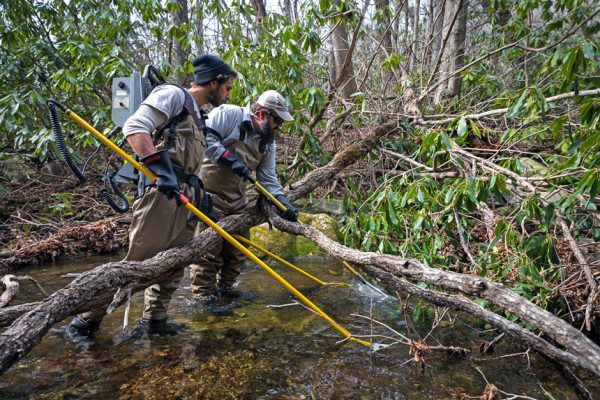 “Back in the late-1800s and early-1900s there was intensive forestry across the landscape,” says Mr. Rash. “A lot of those methods utilize the streams to transport materials out of the forest—these are pretty intense landscape practices. Folks were realizing even by the early 1900s that they were not seeing all those pretty fish that were once there, and intensive stocking took place to try to bring those fish back.”

In North Carolina, not only were brook trout themselves stocked back in the waters, but also rainbow trout from the Western US, and brown trout from Europe. Today, brook trout have lost 70 to 85 percent of their range.

“Folks didn’t know this, but those cultured brook trout stocks trace their lineages back to the New England states,” details Mr. Rash. “Loss of habitat, loss of range, encroachment by brown trout and rainbow trout, and the introduction of genes that were not here traditionally all happened. So, there is influence by those brook trout strains across the landscape.”

This has led the researchers to ask several questions as they work to untangle the genetic picture that exists as multiple trout species now co-exist where brook trout once lived alone. For example: Are these the fish that were here? Have they in fact been influenced by stocking throughout history?

“That’s why genetic work is so critical,” remarks Mr. Rash. “It lets us answer that question and helps us figure out which fish we’re working with. And that has all sorts of implications, particularly when we’re looking to restore brook trout populations.”

This matters from a biological standpoint, not just because managers want to preserve this particular trout, but also because keeping them around and healthy is important to efficiently managing the local ecosystem. 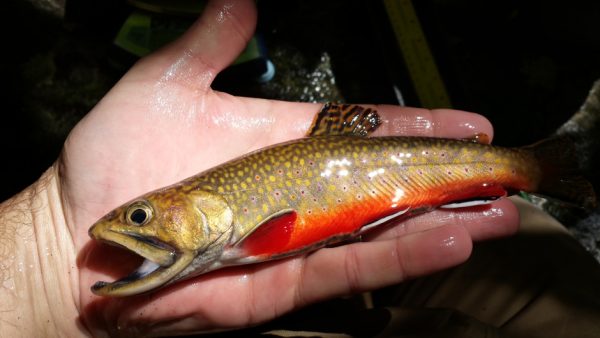 “We can now go to donor streams and know, yes, these brook trout are the ones that should be here, and some of those adults may make excellent candidates for us to move to other streams to help establish populations,” Mr. Rash describes. “That’s a lot more effective and efficient than just randomly grabbing populations, because you may not know what they are. We’re able to really zero in and make the best decisions possible.”

“When brook trout are present and thriving, that means that they’ve got the habitat suitable to maintain them,” states Mr. Rash. “If the waters at the top of the watershed are in good enough condition to support brook trout, that is a positive signal for the resources downstream to which these waters flow.”

Brook Trout are sensitive. If the local aquatic ecosystem is supporting them, it is probably capable of supporting everything else that should be there.

“If you think about a raindrop falling on the top of a mountain, that’s going to go downhill,” remarks Mr. Rash. “If conditions start out well enough to support brook trout up top, chances are that whatever’s below them will have conditions that are better than they would be otherwise.”

Generally, Mr. Rash and the team sees brook trout populations in North Carolina above 3,000 feet, and below that rainbow and/or brown trout. However, historically it’s likely that the brook trout would have been in some of the lower reaches that are currently occupied by rainbow and brown trout alone. These are just a few of the considerations the team weighs as they design a program like this. 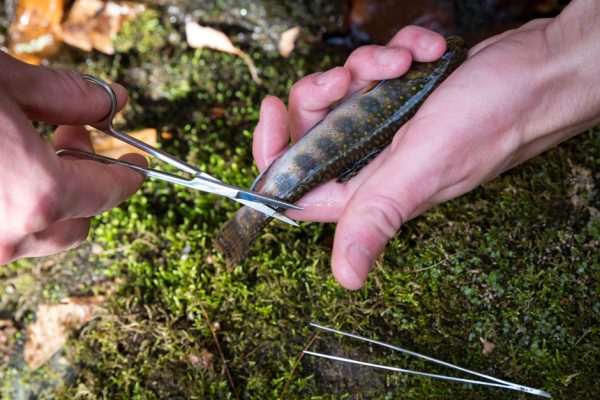 “The work that we do is all part of a larger effort,” comments Mr. Rash. “There are multiple partners involved because we have our focus and other partners do, too. But the issues that impact a species like brook trout don’t understand administrative boundaries, so by working with partners, we are all able to work collaboratively to address the larger issues.”

“We all work to share ideas about what we may be doing individually, and pull all of that together to address brook trout conservation as a whole,” remarks Mr. Rash. “At the end of the day, we’re all trying to get to the same goal. I think it takes folks working together, particularly when there are so many aspects to it. It’s a challenge, but it’s really exciting.”

That goal might include deploying volunteers to collect water samples on an ongoing basis or conducting work to improve habitats.

“Planting riparian vegetation to increase shading, for example,” explains Mr. Rash. “The larger collaborative approach is focused on improving habitat across the range and improving fish passage so that they can have access to different reaches within the stream.”

Local history and culture fuel much of the work and care behind this fish restoration project.

“As the only native trout, for everyone from anglers to biologists like myself, these fish certainly carry a sense of importance that makes them special,” adds Mr. Rash. “Native fishes should be here. Plus, these Brook Trout are so pretty. If you see one of these, they’re one of the more striking fish. When they get those colors that they do, particularly in the fall, it’s a special thing. So yes, they do mean a lot to many people.”