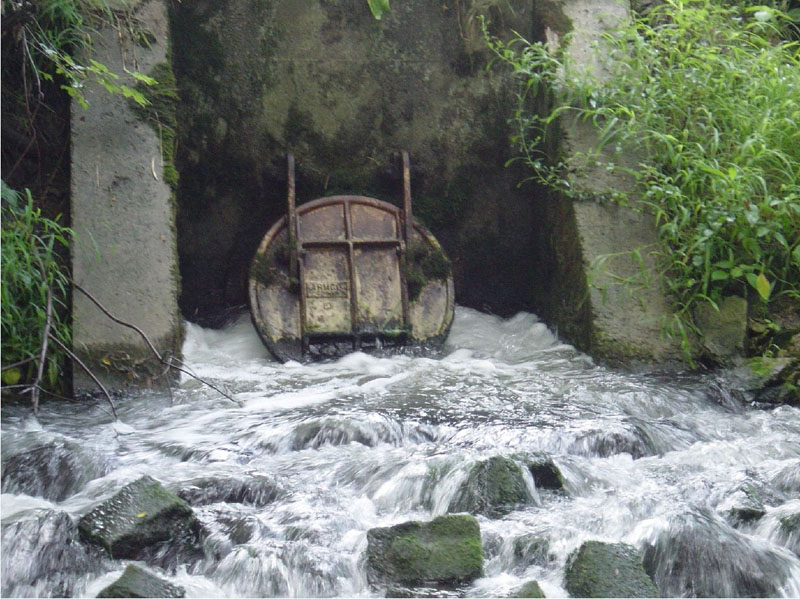 Discharge from a wastewater treatment plant on Fourmile Creek, Iowa. USGS scientists have been studying the fate and transport of emerging contaminants in the creek and their potential use as indicators of wastewater contamination. (Credit: USGS)

Sucralose, the artificial sweetener found in Splenda, adds sweetness to food and drink without calories because the human body doesn’t metabolize it. This peculiarity has led to an unexpected new use for Sucralose and other sweeteners like it: scientists are using them as “tracer” substances, using the compounds to detect wastewater contamination.

Susan D. Richardson, Ph.D., is a professor of chemistry at the University of South Carolina. She is also one of the authors of “Water Analysis: Emerging Contaminants and Current Issues,” a biennial review that describes water analysis developments surrounding emerging environmental contaminants between October 2015 and October 2017. One of the trends she has covered is the use of artificial sweeteners as tracers.

“Use of artificial sweeteners is relatively recent for tracing wastewater contamination, arising within the last 5 years or so,” explains Dr. Richardson. “Xingfang Li’s group has found that acesulfame is the best because it has greater sensitivity with detection limits about 400 times lower with LC-MS-MS than sucralose.”

“Sucralose and acesulfame are much more stable than caffeine, so they are better,” Dr. Richardson states. “And, these tracers are usually used to determine whether groundwater or other waters have been impacted by wastewater. I don’t recall reading that they have been used to pinpoint a source of contamination.

The primary route sucralose and other artificial sweeteners take into the environment is through human urine, and this is what makes them such a useful and accurate marker for detecting wastewater contamination. Wastewater is treated at wastewater treatment plants, but sucralose and acesulfame remain relatively stable through that process, surviving to be released into surface waters. This can also sometimes impact groundwater.

“A fun study recently published by Dr. Li’s group at the University of Alberta measured [these compounds] in public swimming pools, and this was used to determine the amount of urine contributed by swimmers to a public pool (and also a public spa, which was lots worse,” Dr. Richardson quips. “These sweeteners are usually measured using LC-MS-MS, which can detect low and sometimes sub-ng/L levels in water. So, even minute amounts can be detected, allowing it to be a sensitive way to track wastewater contamination.”

The qualities that make sucralose and similar compounds useful tracers and calorie-free sweeteners also raise questions about how they affect the environment once they are present. Because they are stable and do not biodegrade, and are frequently found in water, they have the potential to harm wildlife and water quality. Scientists collecting samples of runoff from a test plot during a simulated rainfall event. (Credit: USGS)

“So far, there are no effects on humans that have been found, but there are some effects on fish and other aquatic organisms,” explains Dr. Richardson. “And, importantly, these compounds can transform with sunlight and other conditions to form more harmful compounds. Because of their stability and widespread use in soft drinks and foods, they are found in the environment at high levels (ppb) compared to other environmental contaminants. They have even been found in deep ocean water off the Florida Keys.”

In the review, Dr. Richardson describes several studies on the effects of sucralose exposure in fish. While there is no evidence that bioaccumulation is an issue, scientists have found that toxicity is an issue in multiple species, including carp and zebrafish.

For now, some teams are parsing out the potential harmful environmental impacts of artificial sweeteners, and other scientists are working with sucralose in water, using it as a red flag for wastewater, and in a sense a shortcut for testing. If they find it, then wastewater is there, and generally there is no further testing needed on that simple point, although there will be next steps to take to find out what else is in that wastewater and where it is coming from. Scientists can even estimate how much wastewater is present based on their measurements.

(And, of course, they are also using it to catch swimmers urinating in public pools, so take note.)