The River Mile students are real-world researchers in Columbia watershed 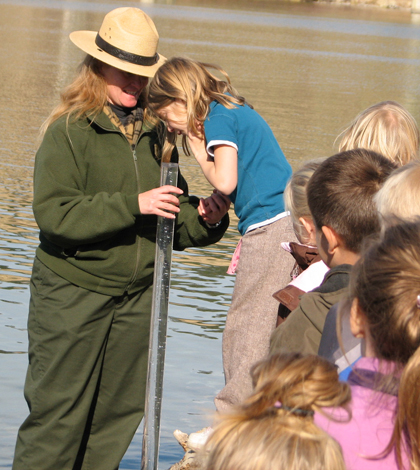 In Central Washington, an initiative to introduce kids to bona fide scientific research has earned some students of Waterville Elementary a surprising honorary distinction.

“Their fourth grade students are the world’s leading experts in the short-horned lizard of the Columbia Plateau,” said Janice Elvidge, education specialist for the Lake Roosevelt National Recreation Area, a park in eastern Washington operated by the National Park Service. “They have GPS tagged those critters up on the plateau so they can locate and track them.”

Elvidge is the “staff of one” behind The River Mile, an education program designed to get students participating in real-world scientific inquiry around the Columbia River Watershed. Student research efforts at Waterville served as a model for the fledgling River Mile program, which the school now participates in along with another 20 school districts across the state of Washington.

Elvidge said the program has expanded to any water in the Columbia River Watershed, which opens the door to many more schools and shrinks hurdles to participation like transportation and bus funding. Some schools are a short walk away from their adopted water bodies.

The goal is greater than just getting kids outside for the sake of being outside. Research has shown improved academic performance from students involved in field investigations, Elvidge said, whether its as simple as habitat observation or something more advanced.

“We know that students doing even some of the basics of that, they’re scoring 30 percent higher on state science testing,” she said. “It’s really important, that engagement in the field.”

The effects go beyond test scores. Elvidge spoke of one former student who wasn’t particularly interested in school before participating in the River Mile program. She ended up going through the River Mile teacher training program, eventually training people in her school to use YSI 556 water quality meters. Today she’s in studying science in college.

“That was a direct result of her participation in the River Mile,” Elvidge said. “It just engages students. It engages their mind. It’s real world. It means something to them.” “Students wanted to see how many caterpillars were at their site. So they set up some random transects and used the quadrat to sample along the transects,” Elvidge said. “They didn’t find any caterpillars.” (Credit: National Park Service)

As much as the program benefits students, its also good for the research community. Students from Reardan High School inventory and monitoring program within Lake Roosevelt park at the site of a planned dirt road and boat launch. Their data will help detect any changes that result from the construction.

The River Mile program will also help continue a survey of crayfish throughout the watershed. Lake Roosevelt National Recreation Area biologist initiated the survey before it was lost to budget constraints. Using that foundation, participating students will seek out crayfish in their waters, logging data on what they find and where they find it.

“They put out traps, or they’re just eyeballing it,” Elvidge said. “Lets face it–kids know how to find crayfish.”

The work will be important because no one really knows the distribution of crayfish species–native or invasive–in the Columbia River Watershed.

“We have a lot of resource managers and scientists very interested in what we’re going to discover,” she said.

The program has grown from serving 289 students in its first year to 2,100 in the 2012-2013 school year. Elvidge would like to see it grow more, eventually opening up to any U.S. or Canadian school in the watershed. That’s a much larger group of students than Elvidge can handle on her own, so she’ll spend the next few years developing training programs, as well as expanding and strengthening a network to help foster communication between teachers and resource specialists. She hopes to launch a fully-realized version of the program for the 2015-2016 school year, in time for the centennial of the National Park Service.

“It’s not just what happens down at the water,” Elvidge said. “It’s those conversations that happen town. Do we run septic tanks or do we build a new sewage treatment plant? Do we or do we not put fertilizer on our lawn? It’s the world all around you.”