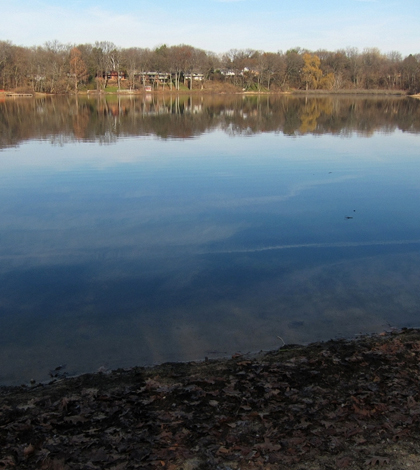 The salt applied to icy roads to keep drivers safe appears to be causing dramatic unintended effects on at least one Southwest Michigan Lake, raising salt concentrations to potentially toxic levels and disrupting the mixing process that sends oxygen into its deeper waters.

Sodium and chloride concentrations in Woods Lake in urban Kalamazoo, Mich., are a hundred or more times higher than in similar lakes in nearby rural areas, according to research led by Carla Koretsky, professor of geosciences, and her students at Western Michigan University

The levels the researchers have observed are approaching–and in some cases exceeding–the chronic toxicity thresholds for salt in water, Koretsky said. The salt has also created a dense layer of water at the lake bottom that is apparently halting the seasonal mixing process that would send oxygenated water from the surface to the depths below.

“If this lake doesn’t turn over, there’s no dissolved oxygen delivery to the bottom waters,” Koretsky said. “If there are any benthic organisms down there, they’re not getting any dissolved oxygen, so you basically have a dead zone at the bottom of your lake.”

The dramatic changes brought on by road salt in Woods Lake snuck up on Koretsky while she was teaching a class on environmental field chemistry. Students were analyzing local lakes for water quality studies looking at eutrophication, nutrient loading and other chemical constituents, including sodium and chloride, which came back very high.

“The chloride levels that came back kind of shocked me,” Koretsky said. “I actually thought they had screwed something up.”

But the student data stood up to scrutiny and were bolstered by the fact that sodium and conductivity levels were also high. Koretsky figured road salt was the likely cause. She set out to explore other research on the effects of deicers on surface water, but was surprised when there wasn’t much there. She found a few papers describing similar effects in lakes in Minnesota, New York and parts of Europe, but nothing as extensive as she expected. To gain a better understanding of what was happening in Woods Lake, Koretsky worked with students to regularly monitor the water quality there. Ryan Sibert, now a doctoral student in marine sciences at the University of Georgia, conducted twice-monthly profiles of the water column at the lake’s deepest point.

The data show that Woods Lake has an average chloride concentration of 300 parts per million. Monitoring in two nearby lakes in rural areas that don’t receive as much salt-tainted runoff averaged just 8 and 15 parts per million. The profiles also show that the lake hasn’t turned over in two years, leaving a hypoxic layer on the bottom that never mixes with the more oxygenated waters at the surface. It seems likely, Koretsky said, that the bottom layer, dense with solutes, is physically preventing the lake from turning over.

The characteristics of Woods Lake make it especially prone to this kind of problem. It’s a steep-sided lake that’s relatively deep compared to its surface area, a shape that encourages stratification. It has no natural inlet or outlet and little connection to groundwater, so the disruptive chemicals that flow in tend to stay there for a long time. The lake also gets a stiff dose of those chemicals from a stormwater sewer built in the 1960s that drains directly into the lake, giving urban runoff a direct route. Koretsky said she’s talked with long-term residents who say they remember when the lake was clear before the sewer came in. After that, the water grew murky and algal blooms grew more common.

With little outside research on the problem available, Koretsky and her students are collecting data on other lakes in the area. So far they’ve found that nearby Asylum Lake also has high chloride levels, but it’s also more connected groundwater flows. That might keep water fresher in the lake and maintain its ability to mix.

Their monitoring is in early stages on some lakes, but their findings could eventually make an important contribution to the scientific understanding of the effects of road salt on surface water.

“The whole thing is interesting to me, especially because I haven’t seen a whole lot of literature on it, so it makes me wonder how widespread this issue is,” Koretsky said. “Is this first lake that we looked at an outlier because of its size and lack of connection to groundwater? Or is this really systemic and there are hundreds of little lakes like this and nobody’s actually really looked?”