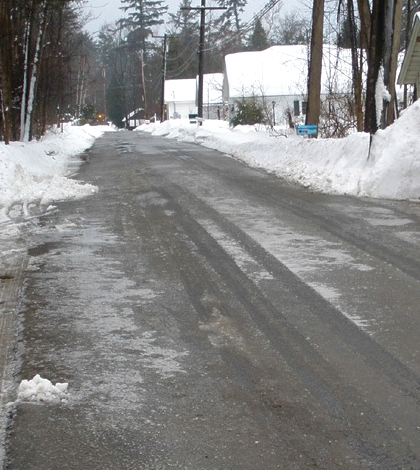 Road salt has turned the water in New York’s tourist-favorite Lake George nearly three times more saline over the past three decades, according to a recently published study. The concentrations in a few tributaries are well above the levels found in lake water, and surprisingly seem to be at their saltiest in the summer well after the ice and trucks are gone.

Though a near-tripling of salt levels sounds dramatic, salinity hasn’t climbed high enough to threaten plants and animals in the lake, according to Mark Swinton, lead author of the study and a post doctoral researcher at the Darrin Fresh Water Institute, a research center of Rensselaer Polytechnic Institute. But the tributaries are another story.

“The scary things is how the salt concentrations are so much higher in some of these streams,” Swinton said. “In the streams, the ones that are affected the most, they’re definitely at concentrations that could affect biota.”

One round of sampling on Finkle Brook, for example, yielded chloride concentrations of around 175 mg/L, and dozens more samples above 50 mg/L.

The rising salinity trend was documented by the institute’s ongoing offshore water quality monitoring program that has sampled the lake since 1980 with support from the FUND for Lake George. The study analyzed those data, as well as water chemistry measurements from a more recent three-year survey of eight major tributaries to Lake George. Both the long-term lake and short-term stream monitoring programs were designed to see how development around Lake George was influencing water quality.

“They’re really very nice and complementary to give a composite picture of what’s occurring,” said Sandra Nierzwicki-Bauer, the institute’s director.

Swinton said the interest around the stream monitoring effort, funded by the Lake George Watershed Coalition, was mostly related to nutrients, as Lake George is oligotrophic. But once they saw the sodium and chloride trends in the lake, their attention turned to the stream data to see where from the watershed those chemicals were coming from. Only about 10 percent of the watershed is developed, and most of that is concentrated around the town of Lake George at the lake’s southern end. Salt concentrations in some Lake George tributaries were much higher than the lake water. (Credit: Darrin Fresh Water Institute)

“So looking at the stream data, we wanted to see how much of that is coming in from the developed areas versus the more pristine areas that are forever wild,” Swinton said.

Using road salt application rates from state Department of Transportation data, as well as road length data from the county GIS program, the researchers found that the high road density around the south end accounted for around 30 percent of the estimated road salt application. That set up a gradient of chloride concentrations along the lake as water flowed toward its single northern outlet.

“You would think that it would come through with the snowmelt and it would pretty much go away,” Swinton said. “But that’s not the case at all. It’s entering year-round.”

But that doesn’t necessarily mean the lake’s salt concentrations will rise indefinitely. According to the study, the lake could be approaching a “salt plateau” of around 17 mg/L, as the amount of salt leaving the lake through its outlet approaches the amount flowing in. That’s assuming that road salt application doesn’t increase in the watershed, which is plausible.

“The constituents of Lake George are very involved and want to do what’s best for the lake,” Swinton said, adding that some communities have switched to deicing alternatives to rock salt. “There is a definite trend of trying to reduce, or at least minimize, the impacts.”