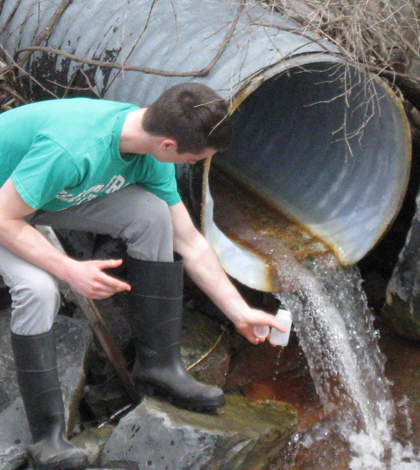 Salt applied to roads during the winter has an unsettling tendency to stick around long after the ice has melted. What’s more, it can make the runoff flowing into nearby streams almost as salty as the ocean, according to a recent study.

A student-led effort at Cornell University made the discovery after another investigation looking into nitrogen concentrations uncovered oddly high conductivity levels in a plot of soil near a campus parking lot. Researchers say the results of the investigation will help fill in the blanks in long-term data sets on chloride levels in streams near Ithaca, New York, and may help to start a conversation on tackling problems that road salt creates.

Once students had found the high conductivity levels, which are a measurement of salinity, an adviser at the school encouraged them to look deeper.

“We’d been looking at long-term changes in chloride and we didn’t know what happened in the spring,” said Todd Walter, a faculty member in Cornell’s Department of Biological and Environmental Engineering and the students’ adviser throughout the work. “(A student) was looking at nitrogen and left conductivity probes installed over a year and the results came back much higher than we’d expected.”

At that point, a new study was afoot, as three undergraduate students at the school – Shane DeGaetano, Sarah Nadeau and Erin Makarsky – went to streams near campus and collected water samples with grab samplers. From February through November 2014, the students kept going back to storm drains that flow into Cascadilla Creek.

All the samples were packaged up into wide-mouth sampling bottles and taken back to a lab on campus for analysis in an ion chromatograph. The results were startling.

“Ocean water is about 30 grams of chloride per liter,” said Walter. “We were measuring 25 grams per liter at the highest. To give that some perspective, there’s less than a tenth of a gram per liter in natural streams.”

Walter and others had suspected the levels might be lower in the progressive Ithaca area, and also because Cornell’s landscapers use methods and applicators to lessen the amount of salt they apply to university roads and sidewalks.

The concentrations are similar to those seen throughout the U.S. Northeast, says Walter. And he’s concerned — based on anecdotal evidence — that the salty problem could actually be worse the farther south you go, as municipalities in areas unfamiliar with extreme snowfalls may apply more salt because of that inexperience.

Another big contributor, Walter guesses, are the legal consequences of not treating icy roads with enough salt to clear them off.

“Municipalities are just so afraid of being sued,” said Walter. “A lot of the impetus for putting salt out there is so no one gets in an accident and sues you.”

He’s taking his ideas to Cornell’s horticulture department, which is looking for ways to mitigate the problem on campus, and hopes to add them to those from others who want to reduce salinity that road salt leaves in streams during winter.

“We need to use less salt and start looking for alternatives to that,” said Walter. “After half a century of clean pavement policy, I hope our findings start a dialogue.”