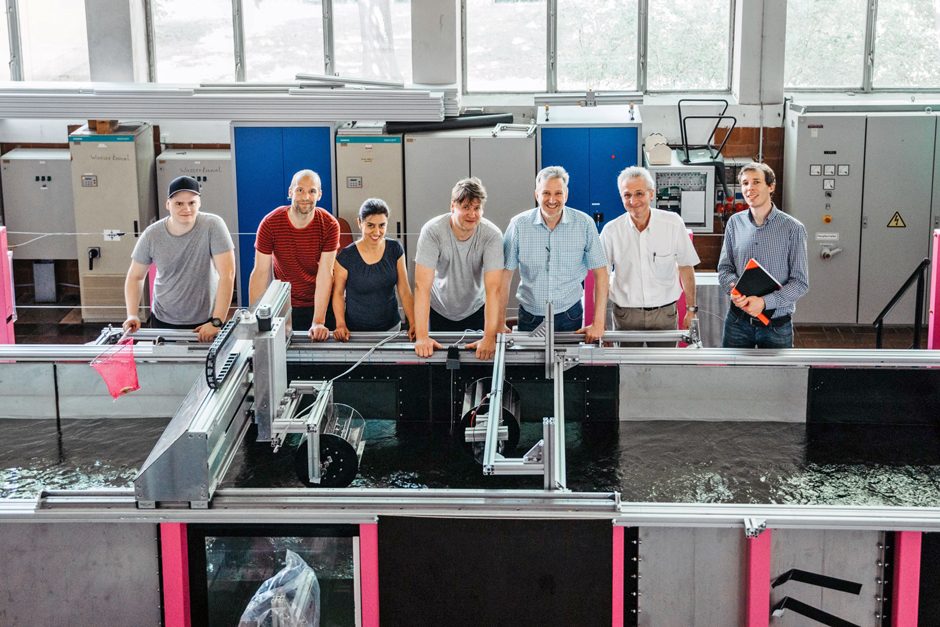 Each year in Germany, as many as 450,000 living fish undergo live animal experiments to test how fish-friendly hydroelectric power plants in the country are. The idea is to discover how readily the fish can move through hydroelectric turbine installations in order to ultimately reduce mortality rates.

Of course, subjecting live fish to a potentially deadly test to save others is a bitter irony. And it’s one that a team of scientists from the RETERO research project hopes to eventually mitigate with a robotic fish for testing.

EM corresponded with Olivier Cleynen and Stefan Hoerner from the University of Magdeburg about the complex flow conditions that set the parameters for the project.

“Water flow in typical hydraulic installations is always turbulent, and often unsteady, especially when large moving parts such as turbines are involved,” comment the researchers. “Those conditions make the real migrations through the installations difficult—and the migration of robotic fish will of course be equally difficult.”

One objective of the RETERO project is to better understand and predict how fish overcome those conditions when they swim up or down through these installations.

“The flow conditions also make it challenging to reproduce the flow numerically and experimentally,” state the researchers. “At the University of Magdeburg, we use large-scale parallel computations to simulate fluid flow, and large hydraulic installations are set up at the Technische Universität Dresden to carry out experimental measurements.” 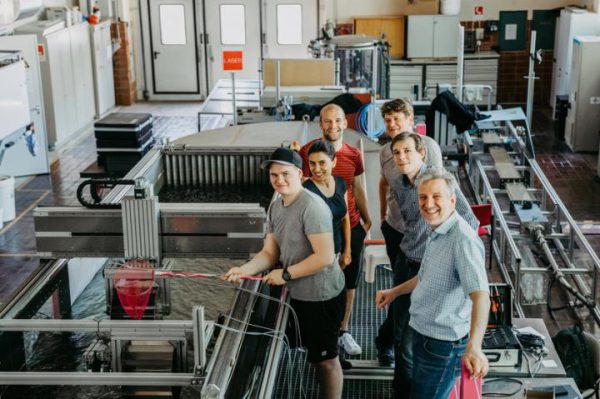 The water channel will allow the researchers to perform a first series of tests with the robotic fish prototype. Until now, it has mainly been used to study environmentally friendly water turbines. On the photo, from left to right: Yanneck Kiiski, student assistant, CAD modeling, Shokoofeh Abbaszadeh, researcher in the fish robotics group, Dennis Powalla, researcher in the fluid simulation group, Stefan Hoerner, project lead, Olivier Cleynen, adviser in the fluid simulation group, and Roberto Leidhold, professor and adviser in the fish robotics group. (Credit: Jana Dünnhaupt, University of Magdeburg)

RETERO refers to, “REducing animal Testing to Establish Risk Of injury to fish caused by passage through turbines by the use of robotic surrogates, computational fluid mechanics and predictive modeling.” The goal of the interdisciplinary project is to develop partially simulation models and autonomous robot systems that will reduce, and eventually obviate the need for live fish in experiments. The work is funded by the German government.

The Federal Institute for Risk Assessment provides the statistics for live animal testing that the RETERO project focuses on. The law in the EU requires that hydroelectric power plants maintain a passable waterway for wildlife, but ensuring compliance means testing—a stressful and potentially fatal process. At best, the testing process results in an approximate 10 percent mortality rate.

Furthermore, safeguards designed to protect fish as they move through power plants are not always effective. Some animals swim through turbines in error, and others are vulnerable to predators once they emerge after fighting their way through.

The team sees robotic fish carrying sensors that can mimic some natural fish behaviors as the answer. The researchers have already gathered some experience working with live fish in a previous research project called Fluss-Strom Plus.

“Thanks to the Institute for Aquatic Ecology Jena, we have investigated downstream and upstream fish migration through a full-scale installation: those preliminary results help us to calibrate further experiments,” the researchers say. “We already know a lot about which species can and cannot swim up and down a turbine-powered vortex chamber fish pass. This was an unconventional turbine design, and no fish injury occurred there. We look forward to reproducing and then exceeding those limits in the RETERO project.”

For now, the researchers have not decided how the robotic fish will move, or what their power source will be.“We are working on different approaches for propulsion,” state the researchers. “For now, we are designing special actuators to reproduce fish-like locomotion directly.”

The data from the sensors that the robotic fish carry will help the team further refine the robots’ behaviors, and monitor other important parameters—although the objective of this project is not to produce a smart fish or “droid” that would entirely mimic the decisions and behavior of a real fish out in the world.

“Instead, we want to combine three techniques: computational fluid dynamics (CFD) simulations, measurement sessions for downstream migration using a robotic fish, and selective live fish experiments used for reference,” clarifies the team. “We argue that the combination of those three methods will yield the best results.” 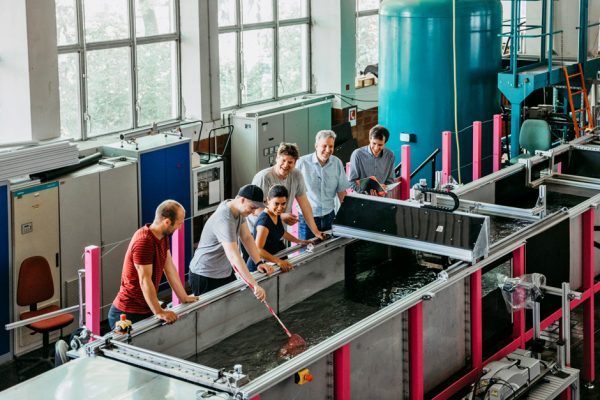 The team with the water channel used for hydraulic tests. (Credit: Jana Dünnhaupt / University of Magdeburg)

In this sense, the best results will be what helps decision-makers the most. In other words, the robotic surrogate will deliver measurement data from sensors that closely represent what a fish experiences when swimming through a device.

“The robotic fish will be self-propelled, should reproduce some level of rheotaxis, and we aim to have some control over residence time,” comment the researchers. “This is already in itself quite a challenge, and Electrical Systems scientists from our team at the University of Magdeburg will be hard at work to develop a capable robot.”

To design the sensors the robotic fish will be equipped with, the researchers are working closely with the Tallinn University of Technology Centre for Biorobotics.

“They develop specialized micro pressure sensors which will be integrated in the robotic fish and which should act as a lateral line,” state the scientists. “Acceleration will also be measured, and we may adapt the set of sensors as the project develops.”

It would be incredibly difficult to mimic the precise behavior of different species of fish with a robotic surrogate, but in some ways, those detailed differences are not so important.

“At the moment, adapting the robot characteristics to imitate different species is not directly part of the plan,” confirms the team. “We are currently focusing on river trout, but we intend our numerical models to be useful across species and flow conditions, once they are calibrated with suitable field measurements. Focus may be extended to other species as the project develops.”

The RETERO scientists have broader aims beyond their scientific objective, as well.

“With time, we hope to develop our methods into a set of ‘best practice’ recommendations to be adopted by various legal entities,” remark the scientists. “We would like to see the current practice for testing fish passability, which involves throwing fishes thousands at a time through turbines, change towards a more intelligent and respectful approach.”

The project is scheduled to research and influence the current state-of-the-art of fish passability testing for the next three years, and the team will be updating the public on progress online: https://retero.org/