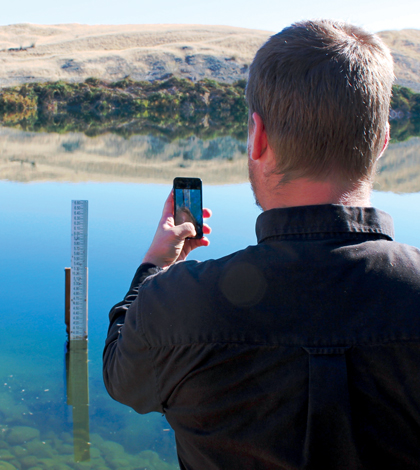 For the first time, citizens of the Kathmandu Valley in Nepal have free access to local water data. The data is the result of a water quality monitoring pilot project started by the California-based nonprofit SmartPhones4Water (S4W).

SmartPhones4Water, an idea developed by Ph.D. student Jeff Davids and the late Dr. Peter-Jules van Overloop from Delft University of Technology (Netherlands), was started in California in 2014. The goal of the organization is to leverage smartphone technology to gather water data in countries where such data is scarce. The method is simple: a network of local citizens use their smartphones to capture and upload the data to an online server and database.

Put in action, the idea has proven to be an effective way to gather data where little previously existed.

The effort was kicked into high gear in 2015 when SmartPhones4Water founder Davids, along with his family, moved to the Kathmandu Valley to start what is now called S4W-Nepal. Water monitoring is critical for the area because the nine rivers running through the area have been greatly impacted by increasing demand, land use changes, industry, and illegal waste dumping. During his first year in Nepal, Davids dedicated himself to developing a strong professional network and formed partnerships with the Himalayan Biodiversity and Climate Center (HimBioCliC), the Tribhuvan University Institute of Engineering, Kathmandu Institute of Applied Sciences (KIAS), Delft University of Technology, the Swedish International Development Agency, and Stockholm University.

“An important part of our effort is community education. A good deal of work has been done in the west to learn how to motivate citizen scientists, but there is a lack of literature in Asia,” explained Davids.

The organization invested time in reaching out and educating Kathmandu Valley citizens.

“We’ve hosted workshops and symposiums for a range of audiences from rural villagers in the outskirts of the valley to highly educated graduate students and professors,” said Davids. “We’re excited to see a great interest in learning more about water.” “We have seen steady interest in our research from young Nepali researchers and 100 of our citizen scientists are undergraduate science or engineering students,” said Davids.

With the ever-growing interest, the effort has continued to expand. Currently, water level measurements are being captured in 10 streams. The organization hired two full-time interns and expanded monitoring efforts to include measuring precipitation at over 100 locations, shallow groundwater levels at 60 locations, and stone spout flow and water quality at over 100 locations. In cooperation with HimBioCliC, the organization began conducting biological monitoring, pre- and post-monsoon stream flow, water quality, and rapid stream assessment data from 50 locations on the perennials stream around the Kathmandu Valley.

While the monitoring efforts have expanded, the organization has kept the required equipment simple. Along with locally made one-meter staff gauges used to capture stream water levels, the scientists use handheld SonTek Flow Tracker Acoustic Doppler Velocimeters, Zeal thermometers, and GHM-Greisinger instruments to measure conductivity.

Perhaps the most interesting tool used are the rain gauges made from recycled two-liter bottles, a ruler with millimeter graduations, and a small amount of concrete. The top of the bottle is cut and inverted so that it acts as a funnel and a means to trap evaporation. A small amount of concrete is prepared and placed in the bottom of the bottle to provide a level measurement reference and as a weight to hold it in place wherever it is installed. The ruler is attached to the side of the bottle with the 0 millimeter mark exactly at the surface of the concrete. The bottle is then a functioning rain gauge. It is installed at an unobstructed location. As precipitation falls on the outside of the inverted bottle top, it will run down into the bottle and accumulate within the bottle. After placing the gauge on a flat surface, the amount of precipitation in millimeters can then be easily read from the ruler attached to the side of the bottle.

The devices have proved useful for measuring rain during monsoon season. The high spatial resolution of the gauges has improved understanding of the differences in precipitation within the relatively small Kathmandu Valley (i.e. 227 mi2). The devices currently measure rainfall within seven percent of the standard government gauge. All readings are captured by a smartphone app called ODK, including pictures of the measurement, GPS coordinates, and the date and time.

“The Kathmandu Valley is a bowl-shaped watershed with no surface or groundwater inflow; the only inflow of water in the valley comes as precipitation,” explained Brandon Ertis, a scientist with S4W-Nepal. “Measuring water inflow is absolutely essential for water management in any area. Think about water supply as a bank account. If you don’t know how much money is coming into the account, you will not be able to safely and responsibly manage the outflows of money from that account.”

All of the S4W-Nepal data is freely available to the public online through Google Sheets. The group is developing a user-friendly web app for end users to interact with and download the data in the future. Sharing the data is an important aspect of Davids’ vision for S4W-Nepal. Part of that vision is the hope that the new wealth of data can be used to help make better water management decisions for the region. “We aim for S4W-Nepal to be a research hub for young Nepali researchers by providing open source environmental data, research supervision, and technology for collecting, storing and organizing large amounts of data,” said Davids. “We are also contributing to the economy of the region.”

With full-time Nepali researchers and a network of citizen scientists in place, Davids will be moving to the Netherlands in the summer of 2018 to finish his Ph.D. at Delft University of Technology. The Nepali team is currently in the process of forming a Nepali non-government organization to continue the work.

“S4W has a three-pronged approach that includes research, education, and employment,” said Davids. “We have helped generate data, improved the understanding of rainfall, and supplied jobs and incentives to local scientists and citizen scientists. By making the data open source, we are encouraging a new generation of Nepali researchers to rise up and face the challenges before them with fact-based water management approaches.”