Salar De Atacama: Salt Flat Gets Most Water Outside Watershed 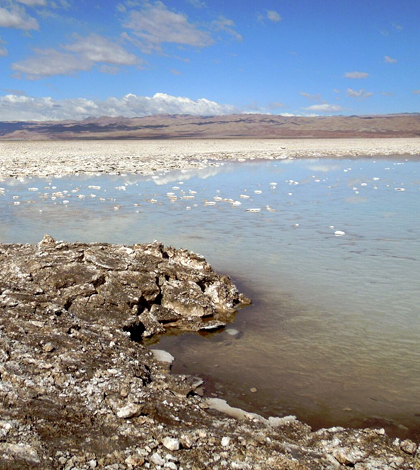 A great deal of the world’s lithium comes from one place: Salar de Atacama, also known as the Chilean salt flat. In 2008, it alone provided 30 percent of the planet’s supply of lithium carbonate.

Companies that sell the element, as well as the Chilean government and locals living nearby, wish to make sure that the region stays properly managed. After all, the dry area known best for its brine needs water like anywhere else.

In a recent investigation, scientists led by researchers at the University of Massachusetts — Amherst have visited the region to study how it drains. The question is an important one for the future management of Salar de Atacama. Its answer may also prove useful in caring for other dry regions around the world, including parts of the U.S. West.

“The water budget there is a source of contention. People use the brine as a resource, and they want to know how much brine is taken out. There are lots of protected lagoons, brackish lagoons. They’re not very salty, but flamingoes use them as mating grounds,” said David Boutt, associate professor of hydrogeology at the university. “We were trying to understand sources of salt to the basin and where moisture was coming in, to get a better handle of the water budget.”

This part of Chile is very dry, he says, noting the difficulty that came when even trying to locate springs for sampling. The locals are pretty good at finding them though, as they have built around them. Some companies working in the Salar de Atacama have also installed monitoring wells but they are sparse. And so Boutt and others on the team simply sampled everywhere that they could find water, hitting streams, springs and groundwater around the salt flat. In all, they gathered 300 samples of freshwater and brine to analyze all the sodium entering into the basin.

“We used a combination of isotope and elemental analysis — a chloride mass balance, which tries to figure out how much chloride comes through and accumulates in the groundwater, as well as remote sensing analysis,” said Boutt. The investigators relied on data from the Tropical Rainfall Measuring Mission satellite system, using satellite estimates of precipitation to understand water recharge in the modern record for comparison to data from water samples. “On projects like this, we combine remote sensing with on-the-ground measurements and integrate those two.”

Satellite data used in the investigation covered a period from 2000 to 2010, which was a relatively short time range for understanding the region’s discharge rate over time. To get around that, investigators compared geological estimates of the discharge rate to what they were seeing in their samples. Gypsum crystals precipitated on a natural fracture in the Tucucaro ignimbrite at around 100 meters depth. (Credit: Lee Ann Munk / University of Alaska — Anchorage)

The modern discharge rate was close to those estimated over time, Boutt says, and the region is draining an area nearly five times as large as its watershed. But perhaps the bigger find is that most of the water within Salar de Atacama is originating from outside its watershed on the Andean Plateau.

“The watershed is importing water from outside its topographic boundaries. With a lot of watersheds in dry areas, you can’t simply ignore water crossing the topographic divide,” said Boutt. Otherwise, underestimating discharge is pretty much guaranteed. “This has important implications for regions like this being managed.”

Areas like the U.S. West and the Great Basin, where Boutt and members of his lab are embarking on a new research project in Nevada.

“A lot of people are interested in the (Chilean salt flat’s) water for various reasons, and these are limited resources,” said Boutt, noting its lithium supply and local copper mining. “We’re trying to understand how to manage these systems and, in some cases, draw lines on a map to say where the water is coming from.”

Full results of the work are published in the journal Geophysical Research Letters.