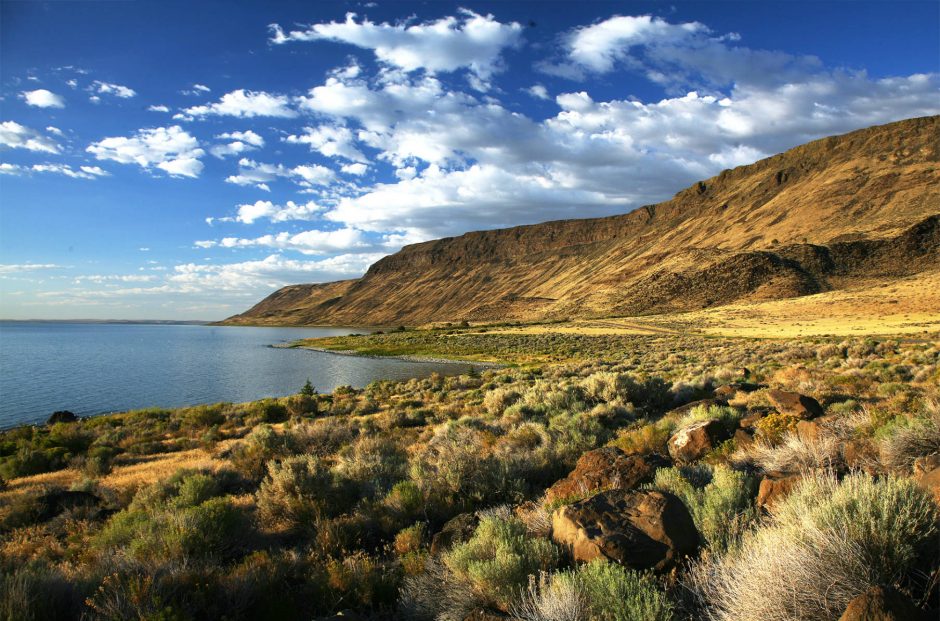 The butterfly effect is a part of chaos theory that points to the sensitive interdependence of all things within a system. One tiny change in a system—such as a butterfly taking off and flying away—can eventually cause large differences down the line.

Ecosystems are an easy lens for interpreting that effect, and recent research from researchers at the University of Montana, Oregon State University, National Audubon Society, and East Cascades Audubon Society suggests that even a changing water level in a lake can result in major fluctuations in local wildlife.

For more than 25 years, various government agencies and other organizations have collected data on Lake Abert. This is an impressive stretch of time for a monitoring effort by any standard. Nathan Senner, a University of Montana postdoctoral fellow, corresponded with EM about the recent report on the data.

“Yes, the lake has been surveyed off-and-on for the past 25 years, which is a long time by the standards of most ecological studies,” explains Senner. “What makes this dataset even more impressive, though, is that much of that effort has been put in by citizen scientists with the East Cascades Audubon Society (ECAS) in Bend, Oregon. Members of the ECAS regularly drive the 3-4 hours from Bend to Lake Abert solely to undertake the surveys.”

Originally, it was the Bureau of Land Management (BLM), which manages Lake Abert and part of its watershed, that began to monitor the lake. They were considering designating the lake an “Area of Critical Environmental Concern,” and needed to assess the number and diversity of waterbirds using the lake as part of their review. ECAS eventually got involved in response to signs of decline in the health of the lake ecosystem; the people at ECAS were concerned over what that decline might mean for the migratory birds.

“The paper itself, then, was an outgrowth of the efforts and concern of the members of ECAS, as well as the larger National Audubon Society (NAS),” details Senner. “Recently NAS has begun a campaign to advance the conservation of saline lakes in the western United States, and Lake Abert features prominently in that campaign. Once we began digging into the data and found the dramatic effects that reductions in lake area are having on birds using the lake during migration, it became clear that the Lake Abert dataset would make a great case study demonstrating why Audubon is concerned about saline lakes throughout the Intermountain West.”

First, biologists with the BLM monitored Lake Abert, and more recently, volunteer observers with the ECAS took over the task. The protocol has remained simple by design.

“Both groups have undertaken (at least) bimonthly bird surveys during spring and fall bird migration along the east side of the lake,” Senner describes. “As the amount of water in the lake has decreased over the years, the remaining water concentrates on the east side of the lake and so it has been relatively easy to survey the lake from the highway that runs the length of its eastern shore. The surveys themselves have been fairly standard bird surveys, with observers beginning early in the morning before it becomes too hot, and all birds being counted from stops along the survey route. Keeping the protocol simple creates some limitations for the dataset, but means that it is highly repeatable and easily carried out, which is critical for efforts involving lots of different observers.” Overall, the water levels in Lake Abert have decreased. This is due to both direct human intervention and indirect factors such as the effects of climate change.

“Water levels at the lake have declined quite dramatically over the past few decades—on average, the lake is now about 200 football fields smaller than it was in the early 1990s,” states Senner. “That decline has largely been a result of increased water diversion by humans for agriculture, but has also to a lesser extent stemmed from climate change-related declines in overwinter snowpack and summer-long droughts. At times in recent years, the lake has thus consisted almost entirely of water coming from freshwater seeps in the bed of the lake itself, and not from any inflow from the greater watershed.”

The salinity of the lake has risen, largely as a result of decreased water levels and the fact that the diversions are limiting the influx of freshwater.

One of the first signs of serious trouble in the Lake Abert ecosystem was visible in the lake’s benthic community. Keith Kreuz and the Oregon Desert Brine Shrimp Company were out on the lake every day during the spring-through-fall season harvesting brine shrimp as a part of their business, but it wasn’t long before they could see there was a problem.

“Very early on, Keith realized that monitoring the other invertebrates in the lake might be able to help him determine the conditions that could predict brine shrimp abundance,” remarks Senner. “He thus monitored the abundance of the other invertebrates in Lake Abert daily and kept track of inter-annual variation in the abundance of these species. Over time this created a pretty amazing dataset on the Lake Abert food web.”

Eventually, Kreuz’s Lake Abert business became a casualty of the salinity-linked uncertainty in the fluctuations from year to year in abundance of brine shrimp. When species like brine shrimp can no longer be sustained in the lake, this affects just about every other species in the local ecosystem.

“This is really what we would call a ‘trophic cascade’ where the direct effects of environmental change on one species have cascading effects on the other species in the ecosystem,” remarks Senner. “High salinities are difficult for pretty much all species—except microbes—to tolerate. Birds living in saltwater environments have to eat more than those in freshwater systems because of the increased amount of energy required to deal with all of that salt. That means that birds are only using saline lakes like Lake Abert because invertebrates like brine shrimp are normally so abundant. When brine shrimp (and brine flies) are no longer abundant, birds can’t get enough energy to handle the high salt loads.”

The final component of the study largely made use of remote-sensing data that is available online.

“Dr. Johnnie Moore in the Department of Geoscience here at the University of Montana has grown interested in Great Basin saline lakes and has built models to understand their hydrology and how it is impacted by human activities,” adds Senner. “He recently built models specifically related to Lake Abert to identify what was causing the decline in lake levels and how those factors also affected lake salinity.” “None of these are currently endangered, but a number of them rely on saline lakes like Lake Abert throughout much of the year,” explains Senner. “This is especially true for California Gulls (the most common gull species at the lake), Wilson’s Phalaropes (the most common phalarope species), American Avocets and Eared Grebes.”

These species are not listed as endangered, but this is really only part of the story.

“Given that none of these species is currently endangered, we might not be so concerned if this were just a story about Lake Abert,” remarks Senner. “But because what is happening to Lake Abert is happening to most other saline lakes in the Great Basin—including the Great Salt Lake in Utah and Walker Lake in Nevada—there is the potential for this situation to snowball and quickly have dramatic effects on the health of these species’ populations. One of our goals is to prevent train wrecks—i.e., to address problems before these species become endangered.”

One of the more interesting aspects of this work concerns the sources of data the team was able to use.

“This work was really only made possible by the confluence of several different sources of data,” states Senner. “Co-author Keith Kreuz ran a sustainable brine shrimp harvesting business on the lake for 35 years and this business allowed him to monitor the abundance of invertebrates throughout that time. Co-author Dr. Johnnie Moore is a hydrologist and geomorphologist and he was able to develop models that could pinpoint why the lake area was decreasing and what that decline meant for the lake’s salinity. And, as mentioned before, dozens of volunteer citizen scientists were engaged. For my part, it was a matter of figuring out the statistical techniques that could wed these different sources of data. What all of this really speaks to, in my mind, is how powerful it can be to collaborate across fields to try to approach a problem from all sides.”

Senner and his collaborators urge us to make an effort to see the saline lakes of America before it is too late.

“During peak migration (when the water levels are right!) Lake Abert can hold hundreds of thousands of waterbirds at one time,” Senner describes. “And, if you haven’t seen phalaropes feed before (look it up on YouTube!), seeing hundreds of thousands of little shorebirds spinning circles in the middle of the lake to catch brine flies is definitely a sight to behold!”

Issues surrounding water diversion and water rights are always touchy, and nowhere in America is this more true than in the West—as everyone connected to the Lake Abert research knows. However, although water in the West is a scarce and important resource, it’s crucial that people see this research as a sign of a management problem troubling the entire watershed and its people, not an isolated wildlife issue.

“We also want to make clear that our take home message is that the situation at Lake Abert should not be characterized as people versus birds,” adds Senner. “The challenge for us is to find ways to manage the lake and its watershed for the long-term benefit of both people and birds.”