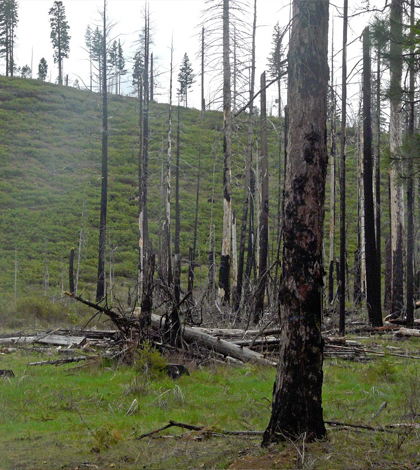 In spite of the efforts of one talking bear, forest fires happen — pretty frequently, too, with between 60,000 and 80,000 occurring each year in the U.S. Ecologists and foresters recognize that the occasional conflagration carries certain benefits, including improved soil nutrients and growth control. Logging companies, however, tend to see their profits going up in smoke, and often rush to salvage any surviving timber from the charred area.

Post-fire logging, known also as salvage logging, is known to impact erosion and runoff rates in some areas. But could the practice also affect the susceptibility of burnt forests to future fires? Researchers with the U.S. Forest Service’s Pacific Northwest Research Station sought answers to this question in a new study published online in Forest Ecology and Management.

Dave Peterson, a research ecologist with the U.S. Forest Service, had barely settled into his job when he found himself drawn toward — or rather, pulled into — this ecological quandary.

“Probably not long after I got hired, one person in particular started knocking on my door going, ‘What are you going to do about this reburn problem?’” Peterson said.

The “reburn problem” was so ubiquitous, in fact, that it had developed into a sort of inside joke among forestry professionals. “The forest [management] will spend about five years planning a fuel reduction or forest restoration project, and usually about year four is when it burns up,” Peterson said, laughing.

Managers of forests throughout Washington and Oregon had noticed a trend: Forests that had burnt down years or decades earlier seemed to be at greater risk of fire in present day. Many of the concerned managers attributed the increased reburn susceptibility to the accumulation of dead wood left from fires past, but management practices don’t change on a hunch. With the burnt forests more vulnerable to erosion and soil damage from fresh fires, the Forest Service needed to verify what was behind the reburn risk.

“After a couple years of badgering, I got a little more serious, and we sat down and talked about it, and realized that some stuff was more researchable than others,” Peterson said. Studying fire severity, for instance, would prove difficult, as weather plays a major role in the size and strength of a burn. But fuel availability was a factor that could be quantified with a trip to the woods and some careful measurements.

Peterson designed and led a study that sampled 255 coniferous forest stands for fuel availability in eastern Washington and Oregon. They focused on forests that had burnt between 1970 and the late 2000s, most of which comprised drier woods such as ponderosa pine and Douglas fir. Furthermore, the forests needed to be old enough to contain trees suitable for post-fire logging.

“We wanted to study the forest types where fire was likely to come back before everything decayed,” Peterson said. “If it’s a hundred years till the next fire, we’re not really that interested in it.” A site that has been salvaged after a fire has less chance for reburn. (Courtesy Dave Peterson / Pacific Northwest Research Station)

Over two summers, Peterson and other researchers traveled from stand to stand. At each location, they measured trees and established transects to calculate fuel on the ground. Patterns soon emerged from the collected data: Within 10 to 20 years after a high-severity fire — a fire in which at least 95 percent of vegetation is burnt — most “snags,” or trees that have burnt but remained upright, fall to the forest floor. And between 20 and 40 years after a burn, even the largest pieces of dead wood are rotten through and ripe for reburn.

Post-fire logging adds a layer of complexity to the issue, as it shifts the rate of fuel deposition, Peterson said.

“Now, on the logging side, what you’re basically doing is taking that initial 10 or 15 years of deposition, and tipping all those trees over right away,” he said. In other words, in stands where post-fire logging occurred, near-immediate fuel availability resembled that of an unlogged forest up to 15 years after a fire. However, that fuel mostly consists of small branches and treetops — large, useable timber is removed in the logging process. So after five to seven years, around the point when larger snags begin to fall in unlogged forests, logged forests actually show less burn potential than their unlogged counterparts.

The study’s findings show that post-fire logging does reduce reburn susceptibility for decades following the initial burn event. If smaller branches were targeted for salvage along with larger logs, the risk would decrease even further, Peterson said.

But logging companies have little incentive to collect wood that provides no economic benefit. For that reason, Peterson said, state and federal landowners will likely be the ones responsible for implementing post-fire logging practices that help reduce reburn. And reduced reburn means healthier landscape, wildlife, and a more productive ecosystem overall.

“That’s why we do fuel reduction in the first place,” Peterson said. “It’s not profitable, usually. If we break even, we’re usually pretty overjoyed.”