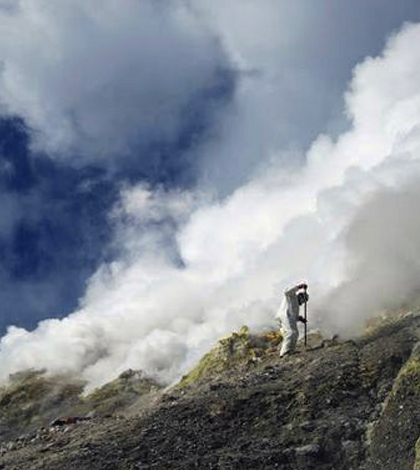 Tobias Fischer and other gas chemists conducted some of the most dangerous work during the expedition to obtain samples of toxic gases from the volcano summits. Fischer is sampling 300-degrees-Celsius hot gas vents at the summit of Gareloi Volcano in the Western Aleutians. This volcano has never before been sampled for gases. (Credit: Taryn Lopez / University of Alaska)

Most of the carbon dioxide naturally emitted worldwide comes from volcanoes or volcanic regions. Despite knowledge of that, there are still many such regions where scientists have yet to quantify the total gases that are pushed out into the atmosphere. One of these areas is the Aleutian Islands, a remote chain of land masses stretching between Alaska and Russia.

The western Aleutians have been fairly well studied in the past, but there is a lack of data covering the volcanic emissions of their neighbors to the east. To fill this gap, scientists at the University of New Mexico traveled to the eastern Aleutian Islands with the goal of measuring all of the gases emitted from the volcanoes there.

The expedition, funded by the National Science Foundation, involved researchers from other universities who set out seismic instruments and repaired monitoring stations that already existed on the islands. But for Tobias Fischer, a professor of Earth and Planetary Sciences at the University of New Mexico, his part of the trip dealt with quantifying and characterizing the area’s volcanic emissions.

“We look at the complete gas composition. The majority of it is water vapor,” said Fischer.

Gases being considered include carbon dioxide, sulfur dioxide, hydrogen sulfide, hydrofluoric acid, nitrogen, methane, carbon monoxide, hydrogen and all the noble gases. Fischer says collecting samples of the gases allows for characterizing the complete composition of what’s emitted from the volcanoes. Quantities, as well as some isotopes of the gases, were measured.

Researchers relied on many different methods to gather the samples. The simplest one involved using evacuated gas bottles to collect vapors rising directly off the volcanoes. Those would get transported back to the lab for analysis. Another relied on Tedlar bags, which held air samples that scientists transferred to them via syringes. Those would be carried back to the ship that took researchers from island to island and evaluated with a Thermo Fisher Delta Ray tunable diode laser instrument.

Other methods used equipment like a MultiGAS machine that contains a number of sensors. Scientists placed this directly into plumes.

“It takes in gases from the air, the fumeral mixture, and then quantifies it in real time,” said Fischer. “It records the data, which you can download to a computer and look at it.”

The last method involved the use of a mini-DOAS machine that is highly useful for assessing the concentrations of sulfur dioxide around plumes. The remote-sensing instrument is deployed at spots beneath the plume and then pointed up at the sky.

“Sulfur dioxide absorbs ultraviolet light. Based on that, we can calibrate the instrument and measure the sulfur dioxide in the plume,” said Fischer. “By setting it under the plume, we get the plume dimensions and can calculate the emissions rate of sulfur dioxide from the volcano.” Using a mini-DOAS, he says, is not a new technique — it’s been around since the 1970s — but the machine has gotten smaller and more precise over the years. Knowing the behavior of sulfur dioxide is important because it acts essentially as a baseline for researchers. Fischer says that it is easy to measure the gas by remote sensing means, and that its presence is highly indicative of volcanic activity.

“The sulfur dioxide in the air is essentially zero, so we know what’s there is coming from a volcano,” said Fischer. “Also, if we know the CO2-to-SO2 ratio, the flux, we can calculate the emissions rate. We know that it comes from the magma, from deep in the mantle. It’s a good magmatic indicator and the ratios tell us a lot about the state of the activity of the volcano.”

Bringing all of those measurements together, Fischer says that there are not yet concrete findings to report. This is because he and his collaborators have only just started to analyze the samples they collected. What he can confirm is that the quantities of gas they collected are seriously high in quality when compared to some of the other gas samples out there.

“The gases will likely have more of a crustal composition. The western Aleutians have more of a direct signal of the mantle,” said Fischer. “But the eastern Aleutians aren’t that well studied. Hopefully by combining all of the data (on both east and west sides), we’ll get a good idea of what’s happening in the entire Aleutian chain.”

Top image: Tobias Fischer and other gas chemists conducted some of the most dangerous work during the expedition to obtain samples of toxic gases from the volcano summits. Fischer is sampling 300-degrees-Celsius hot gas vents at the summit of Gareloi Volcano in the Western Aleutians. This volcano has never before been sampled for gases. (Credit: Taryn Lopez / University of Alaska)