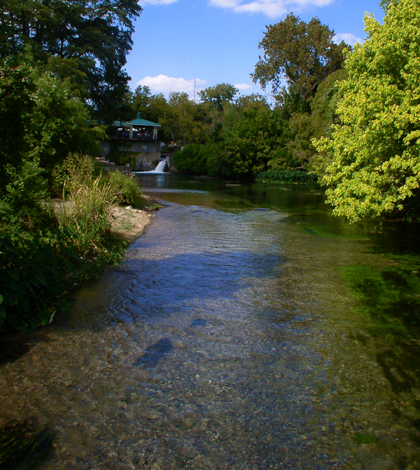 As the chief science officer of Texas State University’s Meadows Center for Water and the Environment, Hardy oversees the San Marcos Observing System. The program is a broad environmental data collection and analysis effort within the San Marcos River Watershed.

“When I came out and started the SMOS project, I had the goal of really knowing what this system looks like,” Hardy said.

Today, Hardy can, with little prompting, recite a litany the physical, chemical and biological surveys of the system he’s played a role in, whether its collecting bathymetric data, running ground-penetrating radar, or building a 3-D, LIDAR-based model of the riparian zone canopy.

What makes this stream in South Central Texas worth all the trouble? The river rises from artesian springs fed by the Edwards Aquifer, a regional aquifer in Texas that supplies drinking water to 2 million people. The springs–some of the largest west of the Mississippi River–deliver a constant flow of high-quality water that supports a diverse group of plants and animals. Some of those species, including Texas Wild Rice, aren’t found anywhere else in the world.

Among the observing system’s first objectives was to supply the data for a habitat conservation plan to limit pumping from the Edwards Aquifer. Developed by partnership of cities, water authorities, governmental agencies and Texas State University, the Edwards Aquifer Authority Habitat Conservation Plan restricts groundwater withdrawals to a level that guarantees enough water will continue to flow through the San Marcos and Comal Rivers to support the menagerie of endangered plants and animals that depend on them.

“The San Marcos Observing System, in some respects, was put into place with one objective: to monitor the system,” Hardy said. “But the data collected as part of that was the technical basis to help define the flow targets in the habitat conservation plan.”

The second objective for the system was to develop a world-class dataset, unique in its detail, scope and temporal intensity, Hardy said. “That would then elicit excitement at the international level for researchers to come here,” he said. “Because we have so much data to test hypotheses, to test sampling methods, to develop model predictions.”

To that end, SMOS researchers have mapped the aquatic vegetation along the entire river. They’ve used techniques to determine the shade of every tree onto the river so it could be correlated with plant distribution. They’re collecting monthly samples of macroinvertebrate by vegetation type. They’ve installed sampling equipment on the springs to continuously monitor water quality parameters to better understand how they respond to regional rainfall differences. At five locations in the river, they’ve deployed probes measuring temperature, pH, dissolved oxygen, turbidity, and other key parameters every 15 minutes.

They’re also monitoring recreational use, which is an important contributor to turbidity levels in the stream. Researchers have installed cameras along the river that were designed to capture pictures of wild game. Instead, they’re helping keep track of the number of kayakers, tubers and fisherman on the river. The data goes toward an effort to balance recreational uses with restoration of species like Texas Wild Rice.

“If nobody was in the river, it would be crystal clear all the way to the Blanco,” Hardy said, referring to a stream that joins the San Marcos four miles downstream from where it issues from the springs. “So we’re trying to demonstrate the ability to permit recreation while still recovering and protecting the endangered species. That’s really an underlying thread here.”