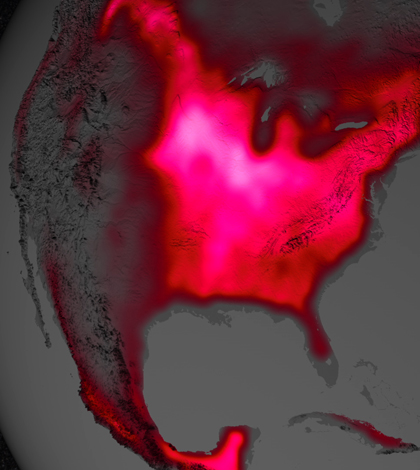 The densely planted corn and soybean crops of the Midwest make it the most photosynthetically active region of the planet during the growing season, even outpacing tropical rain forests at that time of year.

That’s according to new study using a recently discovered method to estimate photosynthesis levels using data from satellite instruments. The method could prove to be a powerful and consistent tool for measuring crop productivity across the world — an ability that will grow more important as demands on the planet’s food supply increase.

The study, published in the Proceedings of the National Academy of Sciences and led by Luis Guanter of the Freie Universität Berlin, is the first to estimate photosynthesis from agriculture using satellite data on sun-induced chlorophyll fluorescence. That’s an electromagnetic signal emitted during photosynthesis that has become detectable thanks to recent advances in spectroscopy.

Past satellite-based methods for measuring vegetation have relied measurements of light reflected from the planet in the visible and near-infrared ranges, which can give an indication of the greenness of plants on the surface. But plants can be green and not photosynthesizing, said Christian Frankenberg, a co-author on the study and a scientists with NASA’s Jet Propulsion Laboratory.

“This is where fluorescence is more powerful–because it is basically a byproduct of photosynthesis, and this is the signal that we are picking up from space,” he said.

And the signal from the U.S. Corn Belt during summer is the strongest worldwide.

“If you look at the Northern Hemisphere in summer, the patterns that we see in fluorescence and the productivity are basically higher than in the tropical rain forests.”

The tropical rain forests are more productive over the course of a year because they’re constantly exposed to sun and warm temperatures. But during the Northern Hemisphere’s growing season even the northern boreal forests ramp up production beyond what’s going on in the tropics.

“The peak productivity for boreal biomes is definitely higher in summer,” Frankenberg said. “But here we found that the crops were standing out even there.”

Frankenberg said it’s not completely clear what makes agricultural regions stand out in terms of productivity, but it likely has something to do with the fact that crop plants have been groomed to make efficient use of water and nutrients compared with natural vegetation. They’re also planted densely, irrigated and fertilized. The data used in the study came from the Global Ozone Monitoring Experiment 2, an instrument on a European meteorological satellite with an original mission that has nothing to do with estimating crop production. Several planned and potential new satellite instruments could add muscle to the method.

For example, the FLEX mission proposed to the European Space Agency would launch a satellite for the express purpose of monitoring chlorophyll fluorescence. And NASA’s Orbiting Carbon Observatory-2, planned to launch in July 2014, will also measure this type of fluorescence, and at a higher resolution.

Those instruments could improve what may already the best method yet for producing consistent and and objective estimates of crop productivity across the globe.

“We’ve shown that it might be a much more powerful monitoring tool from space than anything else we had so far,” Frankenberg said.