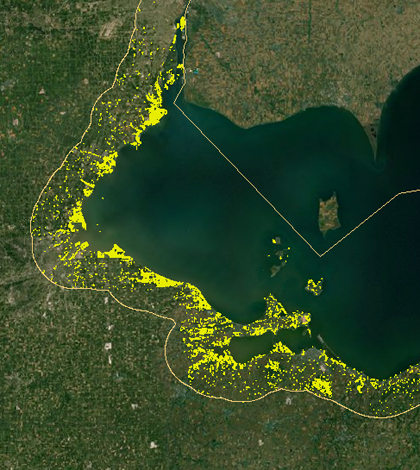 Plots of invasive reeds near Lake Erie grow so thick that not even mosquitoes venture in. Biologists say you’re lucky if you can find a slug.

The culprit, Phragmites australis, is no ordinary plant. It has proliferated in the Great Lakes region to the point that it can even be found along highways.

“Phragmites was not always an invasive species,” said Laura Bourgeau-Chavez, research scientist at Michigan Technological University. “But in the last 20 to 25 years, it has really taken off. Some was actually planted in the past by boy scouts to stop erosion.”

Through seeds and underground stems, Phragmites establishes itself like few other plants, settling in, digging deep and continuing to spread.

“It takes over a wetland over time, changes the ecosystem and cools the water. It dries it out,” said Bourgeau-Chavez. “That affects water fowl – it scares them away.”

Bourgeau-Chavez, along with scientists from the U.S. Geological Survey and the U.S. Fish and Wildlife Service, mapped the U.S. coastline of the Great Lakes, looking specifically at the reach of phragmites.

“When we discovered we could identify it, we developed methods of using remote sensing,” said Bourgeau-Chavez. “We started doing mapping with radar and could pick up the stands.” The researchers used a Japanese satellite equipped with synthetic aperture radar, meaning its antenna could be artificially lengthened. That capability increased the satellite’s reach, helping to penetrate the canopy of vegetation and detect phragmites’ high biomass along the Great Lakes’ coastline. Field tests were then used to confirm the radar’s findings.

“We took GPS units to get a position of the plots and sampled using a computer,” said Bourgeau-Chavez. “We mapped areas about 40 by 50 meters, described the dominant plants, their density, and took photos.”

Data from the field and images are available on the Phragmites Decision Support Tool Mapper, a website set up by the Great Lakes Restoration Initiative, USGS, and research partners.

“The decision support tool is a place you can change parameters and do different things like see the proximity to agriculture or roads, detect or target phragmites,” said Bourgeau-Chavez.

Rows of agriculture were a concern in mapping phragmites, as they appear similar to the reed on radar. Ancillary data was used to remove farmland from consideration.

Lake Erie’s coastline had the most phragmites. Lake Huron came next, followed by Lake Michigan. Only a few stands were found in Lake Ontario and almost none in Lake Superior.

“Erie is shallow. There is a lot of agriculture around it,” said Bourgeau-Chavez. “The water level doesn’t fluctuate as much in Ontario and it’s not as windy.”

Fighting invasive species in the Great Lakes is not easy, and phragmites is no exception.

“It’s not a losing battle. If we can understand the mechanism of invasion, we can control it, ” said Bourgeau-Chavez. “Look at other invasives, like purple loosestrife. Ladybugs were used to stop the spread of it.”

In the future, Bourgeau-Chavez would like to expand the mapping to the Canadian coastline and other areas that couldn’t be covered due to funding considerations.

“My concern is that we weren’t able to map every half acre. We don’t have areas along roads and ditches,” said Bourgeau-Chavez. “But at least managers can see patterns and get ideas of where it’s moving next.”