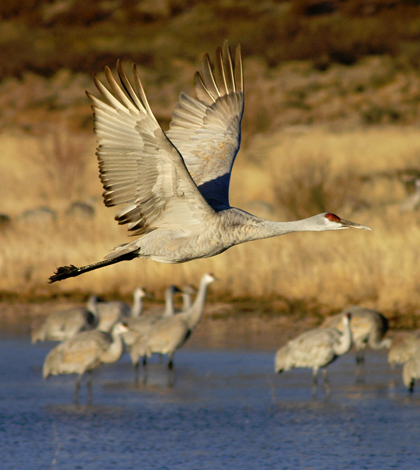 It’s not easy to study animals that move around a lot. Take sandhill cranes for example. The birds, over the course of just one day, will move among several different areas for feeding, resting and socializing. So when it comes time to tag the birds with tracking devices, researchers need some ingenuity and patience.

As scientists from New Mexico State University know well, tagging just a handful of the birds can take up a whole day. The process involves setting up a team of researchers in a perimeter around an area where sandhill cranes land, and then waiting hours for them to do so. But once they do, scientists can finally spring into action.

A large net is typically shot out over the landed cranes, propelled with the force of some sort of explosive device. After getting the cranes pinned down, the race is then on to tag and release them quickly so as not to inflict them with too much stress.

Certain people take measurements, while others band birds and attach the tracking devices. This rush is important because sandhill cranes can suffer from myopathy, a muscle tissue disease, if they are held in captivity too long. Considered along with time are temperatures the birds are held under, as hot conditions can also increase their stress.

New Mexico State scientists conduct a lot of this tagging work in Bosque del Apache National Wildlife Refuge, which sandhill cranes use as a stopover along their migration routes. The purpose of such trapping events is to attach solar-powered satellite transmitters to cranes’ legs, which are used to track their movements and migration cycle.

The work is part of a three-year project aided by officials at the U.S. Fish and Wildlife Service, U.S. Geological Survey, New Mexico Department of Game and Fish and others at the national wildlife refuge. It began a few years ago as an investigation into the cranes’ wintering grounds in the Middle Rio Grande Valley of New Mexico but has expanded since then into a statewide effort. The objectives, then, have changed to ones with more focus on the broader sandhill crane population and its reach across the North American continent. Scientists want to learn more about how the birds are responding to changes in the landscape and what implications those have for managing the population and targeting conservation efforts. They are also curious as to the drivers of change in land use throughout the Rocky Mountain region and how viable, then, the sandhill crane population living there is.

About 80 percent of Rocky Mountain sandhill cranes spend their winters in New Mexico at the national wildlife refuge. Some of the major issues affecting the population include changes in land use, as well as the scarcity of water brought on by loss of wetlands and changes in agricultural uses in the area.

And so the hopes are that the tag data will help to dissect the dynamics of how sandhill cranes use the region and what, if any, changes can be made to improve the resiliency of their population. Location data from each tag get sent every two hours to researchers.

Some key points that scientists consider touch on other locations where sandhill cranes stop over and spend time as they migrate to and from the national wildlife refuge. Targeting those areas helps in determining where conservation efforts would need to be expended if the bird species ever became in danger of dwindling. Those steps could include things like acquiring conservation easements or purchasing properties to set aside for sandhill cranes to utilize.

So far, the effort has already yielded some useful finds for researchers at New Mexico State University. For example, scientists have found that the birds travel back and forth between several wintering areas in New Mexico, behavior that appears to be driven by the availability of forage resources. Also, the first birds leave much earlier than originally believed, while the last group of birds leave much later than once believed. Other sandhill cranes, of a different population, have actually changed their wintering site from New Mexico to Arizona over two years.

There is still much more work to be done in understanding fully the ecology of sandhill cranes throughout New Mexico. The study is planned to continue for another year.