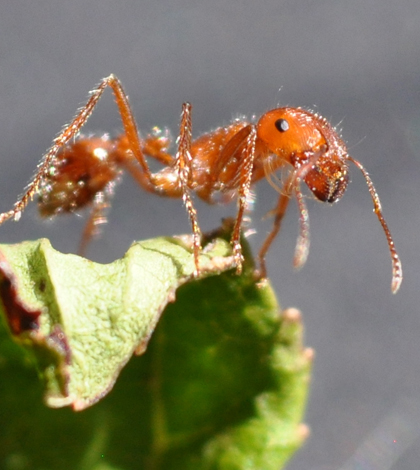 When it comes to ants, myrmecologists know the best techniques to capture them. To draw them in, cookies are used as bait. But not just any cookie will do. It has to be a pecan sandie.

“There’s a historical reason. Pecan sandies have been used for a long time in myrmecology (the study of ants),” said Andrea Lucky, assistant research scientist in the department of entomology and nematology at the University of Florida. The common shortbread cookie is essentially the perfect food to attract them because it hits all of what ants might be needing in their diet at a given time: protein, fat, salt or sugar. Lucky has seen a lot of pecan sandies in her time.

“One of these days, I should get in touch with the Keebler company to see if they’ll sponsor a student,” said Lucky.

The little cookies played a major role in a massive citizen science effort that Lucky and colleague Amy Savage of N.C. State University helped oversee called School of Ants. Working alongside researchers from their schools and Italy’s University of Parma, they documented ant populations across the U.S. while dispelling a misconception that data gathered by citizen scientists isn’t as good as those collected by professional ones.

Lucky and Robert Dunn, an associate professor at N.C. State, developed blueprints for ant-catching kits and made them available on the project’s website. Each kit used pecan sandies, a few pieces of paper and Ziploc bags. While ants gorged themselves on the cookies, typically resting on top of the paper, volunteer scientists put the whole thing into a bag, froze it and then sent it to researchers for analysis.

At labs in Florida and North Carolina, scientists checked the ants and logged their findings in an effort to map the distribution of ants in the United States. From July 2011 to December 2012, ants from 500 unique sites across the country were studied. And there wasn’t a lack of willing participants.

“When we first got our website up and running, we didn’t know if people would do it,” said Lucky. “But in the first two weeks, we got 10,000 requests to participate.” The team had to go back to the drawing board to accommodate so much interest, Lucky says, but it was encouraging to see that people weren’t deterred by the prospect of building their own kits.

The other big issue their work attempted to address was making sure data collected by citizen scientists was as trustworthy as those collected by the pros.

“We wanted to make a case to the scientific community that this way of doing science was really valuable,” said Savage, a postdoctoral scholar in biological sciences at N.C. State University. So they set up a comparison between data collected by School of Ants volunteers and those gathered by a group of undergraduate students. Each group used the same methods and collected data at the same time. “When we compared the results, it was one of the best correlations I’ve ever seen,” said Savage. The mathematical correlation was nearly perfect.

“The reality is that we didn’t find any difference,” said Lucky. “People are smart collaborators and they can be integrated into programs if you’re thoughtful in how they participate.” Those smart collaborators helped researchers find exotic and novel ant species from coast to coast. A group of schoolchildren at a camp in North Carolina found a species of ant there that is only known to exist in parts of northern Florida. Likewise, an exotic Asian needle ant, which typically lives in parts of North Carolina, was found all the way across the country in Washington state.

Those kinds of discoveries are incredibly valuable from a management perspective, says Savage. Oftentimes, it’s not until a population of invasive ants has exploded that control measures begin. At that point, non-target species can also be affected by the treatments, sometimes in negative ways. By starting control measures sooner, it may be possible to avoid some of those negative consequences.

All of the discoveries have been posted online, and the ongoing project wouldn’t have been workable without the world wide web.