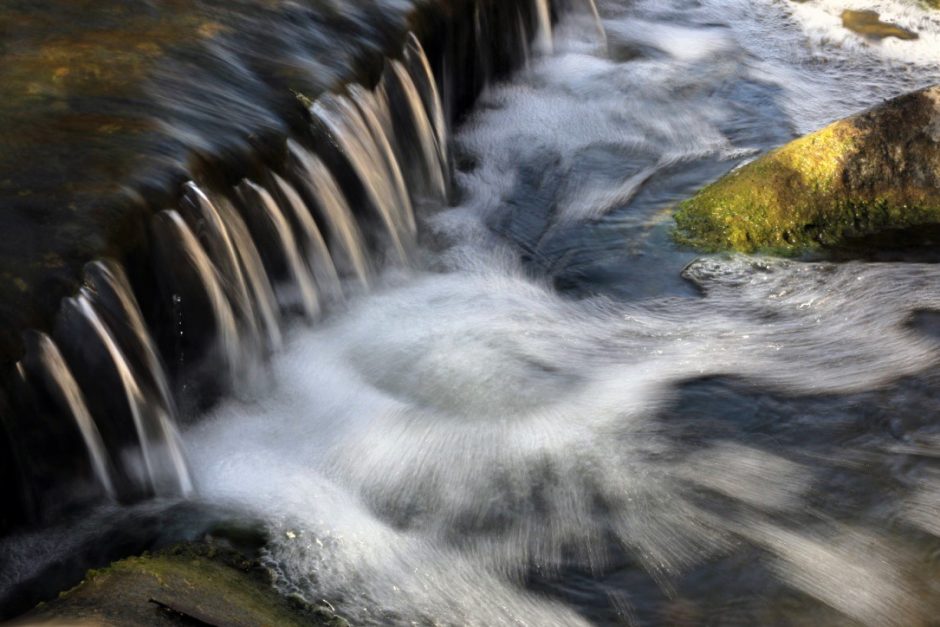 This turbulence in Orange County’s Aliso Creek is analogous to patterns sketched by Leonardo da Vinci. UCI-led researchers have discovered that a similar phenomenon sweeps nitrate pollution to streambeds, potentially aiding in its removal by bacteria and algae growing on the bottom. (Credit: Morvarid Azizian / UCI)

Hundreds of years ago, Leonardo da Vinci drew his diagram of “la turbolenza,” which connects the curls in human hair to the way eddies of water swirl and form waves in streams and oceans. As time passed, other scientists discovered that there was some validity in the focus on these circular “turbulence” patterns, which affect wind patterns, aviation designs, and even weather on other planets.

Bringing the focus back to the stream, new research from scientists at University of California, Irvine, Monash University in Australia, and Italy’s Politecnico di Torino reveals that there is a turbulence “speed limit” that we can apply to any stream to calculate how fast nitrates can be removed from the water. Lead author Stanley Grant corresponded with EM about the research, beginning with what inspired it.

“Funny you ask!” remarks Grant. “My graduate student and I were working on another paper. On a lark I tested the idea, and was really surprised when it seemed to work.”

It’s well-established that agricultural and other land uses cause the runoff of fertilizers packed with nitrate to flow into surface waters. This can create “dead zones,” sometimes sizable ones, far downstream from the source point of the nitrates. Until now, most scientists have believed that the appetites of sediment-dwelling bacteria and algae alone controlled the rate of nitrate removal—but this view does not account for the physics of the churning of stream water, which can move pollutants toward the stream bed. “I think we see what we look for,” muses Dr. Grant. “It’s not that previous researchers neglected physics, but they may have looked in the wrong place. Most earlier efforts focused on the physics of flow through streambed sediments; the role of stream turbulence above the streambed was apparently overlooked. I should also say that everyone accounts for the physics that controls the flow of nitrate downstream—ecologists call that nutrient spiraling. What’s new here is understanding how stream turbulence controls the delivery of nitrate from the bulk stream to the streambed.”

To determine how the churning action of the stream water affects contaminant elimination, the team calculated the “speed limit,” or maximum velocity, at which the turbulence can transport nitrate to the sediment. They next looked at nitrate removal measurements from 72 different streams in the U.S. that had previously been published in order to compare them with their numbers.

“The ‘speed limit’ can be calculated from easy-to-measure features of a stream, such as its slope and depth,” Grant details. “For stream restorations, the limit can be used to raise the speed limit on nutrient removal, by accentuating features of a stream that maximize nutrient uptake. The speed limit can also be incorporated into computer models of nitrate fate and transport, at catchment-to-continental scales. In fact, I’m working on that idea right now.”

Depending on how polluted a stream is, the speed limit may or may not assist intervention efforts. For streams with little pollution, the turbulence rate is what’s controlling how fast the nitrate is being removed; the nitrate eaters at the bottom aren’t overloaded, and they’re waiting on the current to bring them more nitrate. However, in polluted streams, there’s enough of a backlog for the opposite to be true, and the processing time of these nitrate eaters is what’s controlling the speed of the removal.

“The really cool thing about the speed limit is that it scales linearly with the shear velocity of the stream—which is a measure of friction the stream imparts to the streambed,” explains Grant. “The shear velocity, in turn, depends on the Darcy-Weisbach friction factor, and also the Manning coefficient. So the speed limit can be related back to absolutely standard ways hydrologists, engineers, and ecologists think about streamflow.”

Ultimately, cleaner streams are better able to handle nitrate, up to a point. They convert it to gas, rendering it harmless, or soak it up themselves. It’s only once too much nitrate is entering into the water that the problems start. Thanks to the “speed limit,” scientists will now have a better sense of where that point lies, and how to manage nitrates are their source. Moreover, this work means that more than simply the size of the stream, for example, will control how much nitrate runoff can be eliminated naturally. Other factors will come into play, including the speed limit, and existing nitrate levels. Hubble Space Telescope images continue to show turbulence in Jupiter’s atmosphere. This close-up of three red ovals on Jupiter, the smallest of which (3,000 miles in diameter) is new and may merge with the Great Red Spot (10,000 miles in diameter) in August. Red Spot Jr. is the medium-sized red oval, about 5,000 miles across. (Credit: Imke de Pater, Michael Wong, Philip Marcus and Xylar Asay-Davis (UC Berkeley), and Chris Go (Cebu, Philippines))

“In general, headwater streams are especially effective at removing nitrate, because most of the streambed surface area in a stream network is associated with numerous small streams,” remarks Grant. “But how fast those streams actually process the nitrate will depend on all the factors you mentioned.”

Eventually, this work may be able to help the development of strategies for remediating dead zones, because it sets a maximum threshold beyond which streams can’t handle nitrate runoff. “In practice, of course, that’s going to require landowners, and farmers in particular, to reduce nitrate loading to streams,” adds Grant.

Dr. Grant is currently working with an expert to scale-up the results from this study to all streams in the U.S.

“Plus lots of experimental questions,” Grant states. “The great thing about this result is that it raises more questions than it answers.”