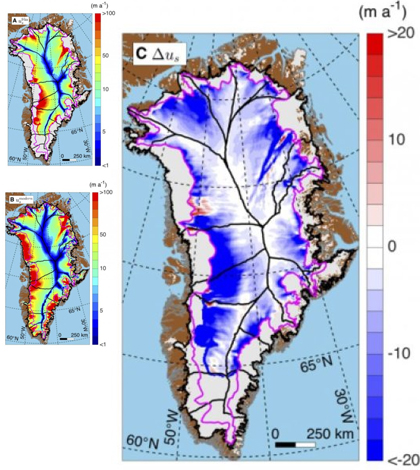 The Greenland Ice Sheet is on the move and has been for thousands of years. For the first time, however, scientists have managed to capture the sheet’s movements over the past 9,000 years as ice has flowed from its interior to its exterior, according to a release from the University of Texas at Austin.

The result is a “paleo-velocity” map of the ice movement that has been built from a database developed during earlier research at the university’s Institute for Geophysics. The map comes from an extensive database of many layers of ice in the Greenland Ice Sheet. Using this database, scientists were able to determine flow patterns of the ice sheet and compare their findings to modern ice sheet flow rates.

Generally, researchers found that the rate of interior movement toward the outer edges is slower than it was for much of the Holocene. The slowing of the interior movement was attributed to modern snowfall occurring at a slower rate than in the past, slow ice sheet stiffening over time and the collapse of an ice bridge that once connected Greenland to Ellesmere Island.