Scientists Document Groundwater And Seawater Mixing On US Coasts 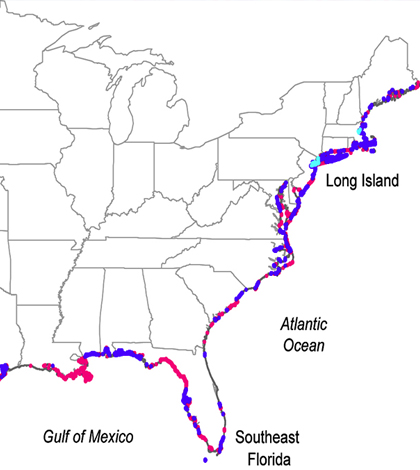 Scientists have long known that groundwater and seawater mix along America’s coastlines. But they have also been limited in knowing where or how much of that mixing was happening, except in a few locations.

Thanks to researchers at Ohio State University, in partnership with others at NASA’s Jet Propulsion Laboratory, we now have a better idea of what’s going on along and underneath the coasts. They have developed a map of underground drainage systems that connect fresh groundwater and seawater, pinpointing areas where a great deal of unseen mixing takes place.

A more technical term for the mixing is “submarine groundwater discharge,” and investigators documented it along coastlines using data from a large number of collaborating institutions. The result is an expansive map showing where drinking water, typically groundwater, is vulnerable to saltwater intrusion now and in the future.

Researchers identified 12 percent of the continental U.S. coastline, including the northern Gulf Coast from Mississippi to the Florida Panhandle and parts of the northern Atlantic Coast and Pacific Northwest where once-hidden drainage systems make the ocean most susceptible to freshwater contamination from septic tanks and fertilizer runoff. There, excess nutrients in the water can cause harmful algal blooms to form and remove vital oxygen from the water.

Overall, researchers found that more than 15 billion tons of freshwater flows through invisible underground networks into the ocean along continental U.S. coastlines every year.

Another 9 percent of coastline, scientists found, including locations such as Southeastern Florida, Southern California and Long Island, are especially susceptible to contamination from sea to land. In those areas, saltwater intrudes inland and infiltrates the underground freshwater supply.

Among sites on the map with the worst impacts are Los Angeles and San Francisco, which were found to be vulnerable to both ocean contamination and saltwater intrusion simultaneously.

Full results of the work are published in the journal Science.