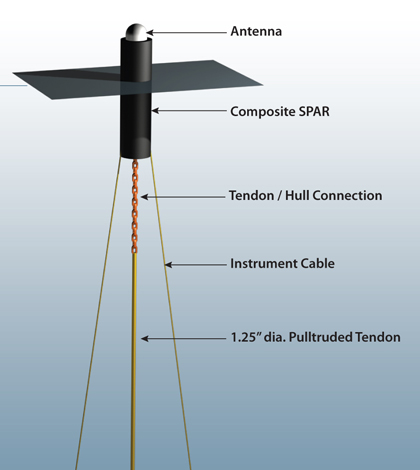 Research projects have serious missions, and often go by complicated acronyms that leave you scratching your head. But there is one with a name that stands out – the TACOS project.

Scientists at the Scripps Institution of Oceanography at UC San Diego came up with the name, which stands for Tendon Anchored Composite Ocean Spar. Led by John Orcutt and Jon Berger, the project’s goal is to design a sensor platform that can be left in the ocean for decades with minimal maintenance. The design process will look for ways to improve on the capabilities of buoys used today.

“If I have to rebuild a system periodically, the cost of maintaining the site will be very high,” said Orcutt, distinguished professor of geophysics with Scripps. “We want to reduce life cycle costs and make it more affordable.”

As the name implies, the design has a spar made of composite materials that is tethered to the ocean floor using a tendon cable. By using composites, the platform’s life can be greatly extended.

Ocean spars are long, thin buoys that float upright in the water. They usually have a large mass and a small waterplane area, making them very stable. Because of this stability, they’re a popular choice for taking ocean measurements.

The tendon cables are designed to be resistant to tangling and easily spooled. Their hollow center allows them to support great lengths of fiber optic cable that will interface with sensors deployed on the ocean floor.

“A spar puts the center of buoyancy deep in the seawater, tens of meters down,” said Orcutt. “Because wave motion decays exponentially with depth, the vertical motion of the spar is small.”

To lend credence to the spar design, Orcutt pointed to the U.S. Navy’s FLIP (FLoating Instrument Platform) research vessel, operated by Scripps, which uses the same principles to place buoyancy deeper in the water. It has been used for more than 50 years, he said.

Deploying the spar will be very similar to deploying conventional buoys, but its power will come from wave action instead of solar. With buoyancy centered deeper in the water and the spar platform more stable, wave energy is easier to harvest.

Orcutt says wave action will create enough power for the system, and that he and Berger, a Scripps senior researcher, are looking to provide a kilowatt of power. With technological advances, especially in electronics, communications and computing that will occur through time, the system should become increasingly efficient. But how can wave energy be captured?

“There are two solutions to this. One is rings that move up and down with the wave forming a generator,” said Orcutt. “The other, which we’ve used in the past, is to put a large diameter, plastic tube in the water. At the top goes a generator that gathers energy as the waves go up and down moving the air in the tube through the generator.”

The TACOS design can support the same sensors as a conventional buoy design, including those for conductivity, temperature and depth. Other sensors, like optical backscatter, which measure the density of life forms, and sensors that measure the sun’s radiance, are easily deployed using the ocean spar concept.

Orcutt also says the spar platform is stable enough to use LIDAR, a technology that employs lasers to measure atmospheric backscatter from particulates and water vapor with the goal of developing a three-dimensional profile of the winds overhead. Seafloor sensors including seismometers, hydrophones, pressure gauges and others are served by cables running from TACOS to the seafloor.

“The spar buoy has tremendous advantages to reduce pitch and roll,” said Orcutt. “Having a stable platform with more satellite bandwidth gives us a lot of options and opens up huge technical and scientific advantages.”

Increased bandwidth comes from the fiber optics running down the center of the thick tendon cable. Since light travels at very high rates, power and communication signals can use it to transmit more quickly and efficiently. Once data from sensors are collected, it will be sent via C-, Ku-, and Ka-Band satellite to the Internet. Orcutt notes that the data will also be backed up by data buffers on the platform.

“The first step is a much more determined design. Using wave power, satellite telemetry and making it all more efficient is an expensive undertaking,” said Orcutt.

The design will take about a year, Orcutt says. He and Berger are working with Horton Wison Deepwater and John Crane Associates to further develop the new buoys. The TACOS name, however, is one innovation that won’t need further development.

“It’s an acronym that makes a lot of sense,” said Orcutt. “But the name may be a bit too clever.” The TACOS mooring will use a spar buoy and a tendon line constructed of strong, resilient composite materials (Credit: Scripps Institution of Oceanography)