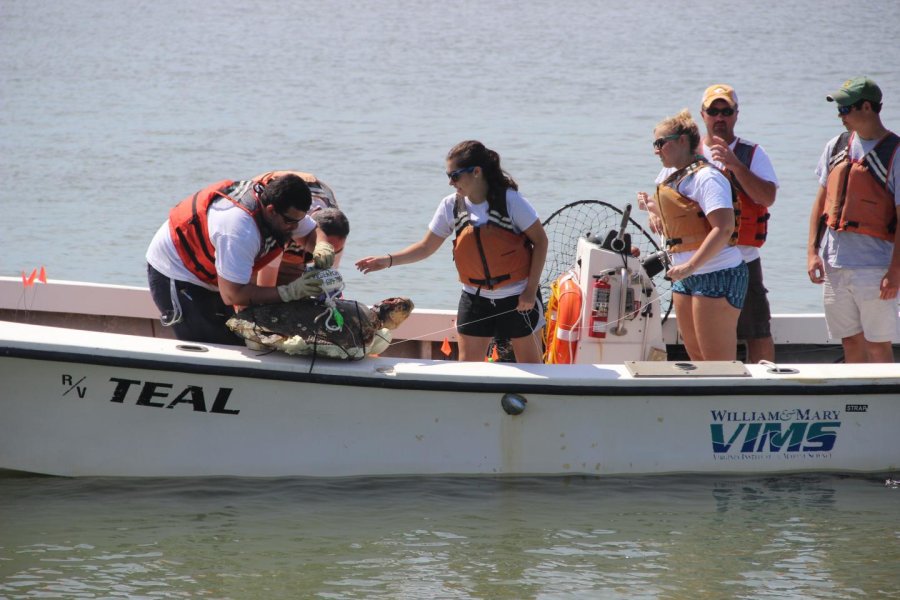 Though the numbers of Loggerhead sea turtles that swim into Chesapeake Bay each year are staggering — 5,000 to 10,000 come in annually to feed — there really aren’t that many of the turtles swimming elsewhere. As a species, the turtles are listed as threatened because they have a lot to contend with in the ocean. Known threats like pollution, habitat loss and ship propellers commonly contribute to sea turtle mortality. But one big question remains for a few researchers near the bay: What happens to the carcasses of the dead turtles?

Scientists at the Virginia Institute of Marine Science (VIMS) are using a novel approach to finding an answer. Instead of using a float or some other fabricated object, the investigators have equipped actual dead loggerheads with GPS units and released them into Chesapeake Bay.

The experiment began June 13 with deployment of the two deceased turtles, dubbed “frankenturtles” by some, and several bucket drifters that capture information about the bay’s currents. It took place in open Bay waters about halfway between the mouth of the York River and Cape Charles on Virginia’s bayside Eastern Shore. The feat was nothing small, as the two turtles combine for a weight of 220 pounds. One was a young turtle when it died, but the other had time to grow much larger as it lived for nearly 20 years.

Plans are to deploy the turtle carcasses and the drifters on different occasions and use the data that come in to determine the amount of wind forcing that comes into play. The floats will be left for about three to four days at each go because that is about how long a turtle carcass lasts in the open ocean. Investigators will then consider the separation rates between the bucket drifters and the turtle carcasses to gauge forcing from wind.

With better knowledge of wind’s effects, researchers can improve one of their models simulating how deceased turtles are tossed about in the bay and ocean. The team plans to feed the model with historical records of turtle stranding locations provided by the Virginia Aquarium’s Stranding Response Team. Then they can simulate how the carcasses have been transported around by the currents.

The model is appropriately named the “turtle carcass drift model” and needs to be refined to aid turtle conservation efforts in the future. Essentially, if scientists can pin down where a turtle is drifting, they can very likely find where the turtle died in the first place. From there, steps can be taken to protect other turtles who may pass through the same regions.

And that would help to alleviate some of the sea turtle mortality in Chesapeake Bay, which sits at about 100 to 300 turtles lost each year. That number is actually down a little thanks to changes to the pound-net fishery.

But those figures aren’t entirely accurate, because there are many factors that come into play when attempting to find a loggerhead sea turtle carcass like changes to weather and ocean currents. And because it is extremely difficult to find one before it disappears, scientists at VIMS can’t be certain that the known rates depict the problem accurately. Some of their previous studies looking at the decay rates of the carcasses show how the speed of the decay can further increase the likelihood that finding a dead sea turtle will go unrecorded. Many also wash into marshes and other areas where people don’t often find them.

Full results of the effort aren’t yet available as investigators continue to gather data. The work was funded by the Dominion Foundation and the Green Fee program at William & Mary.