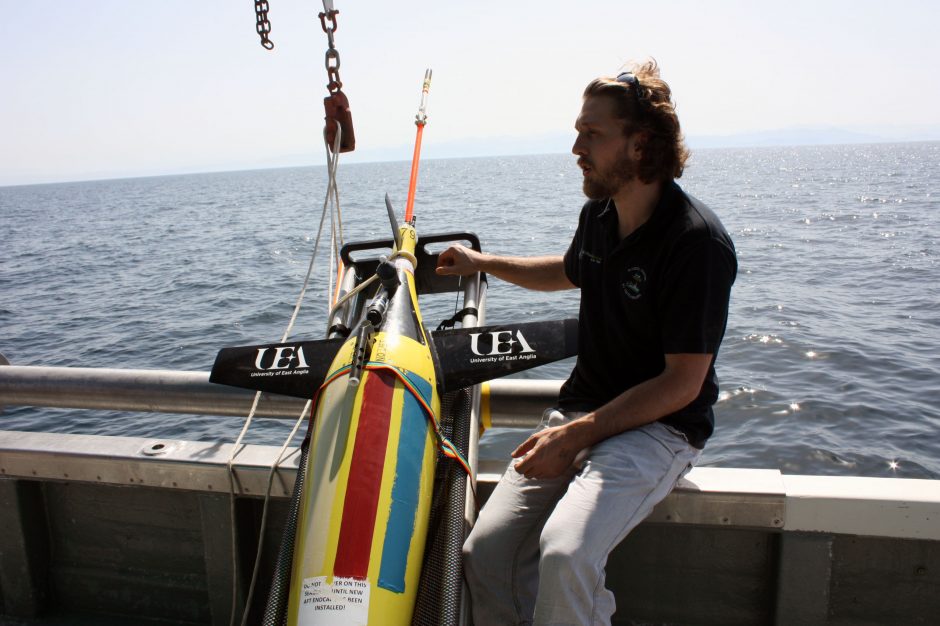 Scientists have been aware of an anoxic “dead zone” in the Gulf of Oman for some time, but recent research from the University of East Anglia (UEA) has confirmed that the situation is more advanced—and a more serious environmental disaster—than previously thought. Now, thanks to the ongoing dives of Seagliders, underwater robots armed with sensors, the UEA team has much more data and detail about the anoxic region and its spread.

Many regions of the Gulf were previously inaccessible to researchers due to geopolitical tensions and safety concerns arising from problems like piracy. However, for Seagliders, the water is fine. Around the size of a human, the gliders can stay on task in the ocean for months at a time, reaching depths of up to 1,000 meters. In this case, two gliders explored the Gulf of Oman in tandem for eight months, covering thousands of kilometers as they created a clearer image of ocean mechanics and oxygen levels from place to place.

The surprise discovery: a region with almost no oxygen larger than Scotland’s 78,789 square kilometers—compare that to South Carolina’s 82,931.

The Arabian Sea has been home to a large and troubling dead zone for some time now. Until this work was completed, however, no one had any details about exactly how large the dead zone was, or how serious the oxygen depletion. Piracy and other conflicts in the region had rendered data collection too dangerous—highlighting one of the most important applications for this kind of technology.

Dr. Bastien Queste of UEA’s School of Environmental Sciences, who led the research team, explained the findings to EM.

“The Arabian Sea oxygen minimum zone (OMZ) has been here for as long as we know,” Dr. Queste begins. “Such OMZ are natural phenomena that occur in three or four keys places around the globe because of some really sensitive balances between oxygen supply from the atmosphere, and decay of organic matter. The fact that they’re based on a very delicate balance means that a small change in conditions, such as pollution causing more decay of organic matter, can have dramatic effects on the size of the oxygen minimum zone. It can tip either towards increasing, or decreasing oxygen.”

In the early 1960s and then again in the 1990s, the scientific community conducted large campaigns, making observations of the OMZ and mapping it. The International Indian Ocean Expedition documented the OMZ first, and the Joint Global Ocean Flux Study (JGOFS) confirmed the growing region 30 years later.

“These studies mapped the OMZ and found that it was intensely anoxic in the center offshore region, between Oman and India, and found low but not absent levels of oxygen in the peripheries,” explains Dr. Queste. “Because of piracy and geopolitical tension, we haven’t been back to do large mapping studies, and so have kept this ‘mental picture’ of oxygen distribution since then, and used it in all of our computer modeling and forecast studies.”

Obviously, so many years later, an accurate map and data were long overdue.

“As part of this project, we went to the Gulf of Oman, which shares its water masses with the wider Arabian Sea, and found that the oxygen was much lower than we thought from the outdated data,” details Dr. Queste. “The region is now anoxic—essentially extending the Arabian Sea OMZ into the marginal regions, much closer to where people live, fish, and depend on the marine environment. Hence the growing concerns.”

Many things could have contributed to this change. The greatest contributing factor by far, however, is climate change. This is because, as Dr. Queste explains, the water’s oxygen levels are determined by the delicate balance between oxygen supply and loss. Oxygen supply from the atmosphere is mixed into the water by waves, eddies, and energetic mixing near the surface and oxygen loss happens primarily when bacteria living on and eating sinking decomposing organic matter breathe oxygen. 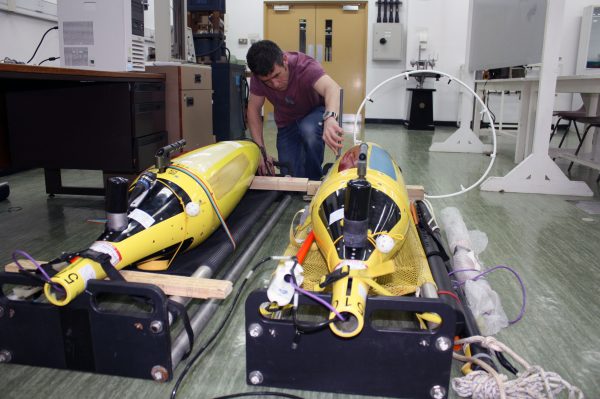 “Increased warming through climate change means that bacteria breathe more for a start; it also means the surface layer is warmer, creating a stronger barrier between the surface warm water and the deeper cold water—a density barrier—which reduces the amount of oxygen being injected into the ocean,” Dr. Queste describes. “Climate change also changes wind patterns which in turn changes surface energetic mixing. Increased land use, larger cities, and increased pollution will also lead to more nutrients such as nitrogen and phosphorus entering the water, which promotes more algae that later sink and get consumed by the bacteria. It’s an incredibly intricate system with many moving parts!”

Since the OMZ was first measured 50 years ago, however, there has been a dramatic shift—and that could be the result of more than one thing.

“The next step, for me at least, is to answer that very question!” remarks Dr. Queste. “I’ve just looked at some of the mixing processes, and they explain part of the picture, mostly the changes from season to season, but I cannot yet explain the big shift from 50 years ago! Already figuring out whether the supply of oxygen is decreasing, or if it’s the consumption that’s increasing would be hugely interesting.”

Dr. Queste also questions how much the Gulf of Oman’s imbalance in oxygen consumption is causing the wider Arabian Sea OMZ to grow—something future research will hopefully reveal.

Originally, the Seaglider project was designed to monitor algal blooms, not track a dearth of oxygen.

“The project was initiated by Sergey Piontkovski, of Sultan Qaboos University and funded by the US Office of Naval Research Global office, to look at blooms of bioluminescent algae (Noctiluca species) in the Gulf,” states Dr. Queste. “You often see pictures of them in the news, the ones that leave light streaks behind boats or swimmers, or make glowing waves along the shore. We took the gliders to map underwater patterns in bioluminescent algae through different seasons, and see what processes caused them to bloom (mixing events, increased stratification, increased nutrient loads?). We weren’t expecting the oxygen to be this low so we didn’t go looking for it—it was coincidental!”

The Seagliders are human-sized, remote-controlled, untethered vehicles. They have notably long endurance as they move through water, usually a range of four to six months, because they have no propellers to eat up battery power. 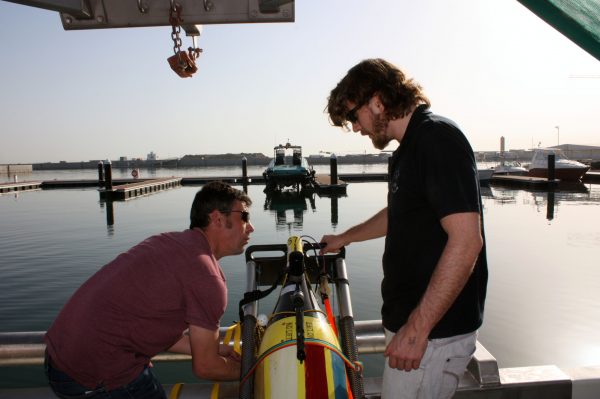 “Instead, they move using a really ingenious system,” explains Dr. Queste. “They have an oil-filled bladder that they use in the same way as fish use their bladders. They fill it with oil, so their volume goes up while mass stays the same, or bring the oil back into the hull so the volume goes down, and mass stays the same, to change the density of the vehicle. The vehicle’s density relative to the water around it defines whether it sinks or floats. This way it only has to use its motor twice: once at the surface to start sinking, and once at the bottom to start floating again.

To direct itself forward, it actually changes its center of gravity by moving a big battery inside the hull. This allows it to tip forward and backward, and to lean side to side. The fixed wings on the side then allow it to glide through the water. It moves in a constant sawtooth pattern, first sinking as it points down, and then floating as it points up.

“They communicate via Iridium satellite when they come to the surface and get a GPS fix,” Dr. Queste describes. “At this point, they can download a new set of parameters. We essentially monitor them in near real-time; at the end of every dive we see the data collected and they get their new orders. This also means that if the instrument is lost, or gets caught in drifting nets, we don’t lose all the data. All of our glider data is freely viewable on http://ueaglider.uea.ac.uk.”

The Arabian Sea was known to be in trouble before this work, but the extent of the problem is more serious than scientists previously imagined.

“The OMZ is a natural phenomenon, and the Arabian Sea has always been the most intense,” explains Dr. Queste. “However, we thought it was anoxic (= 0 oxygen) in the core, but that oxygen went up to concentrations above suboxia (> 6 umol.kg-1) in the margins. The oxygen has dropped dramatically in the Gulf of Oman, which now means there’s a whole different type of biochemical cycling going on. Bacteria now have to ‘breathe’ nitrate instead of oxygen (= denitrification). This is what produces the greenhouse gas nitrous oxide.”

This means that the bacteria are producing a greenhouse gas more potent than CO2 thanks to the growing OMZ—300 times more potent. The growth of the zone toward human settlements is also worrisome. 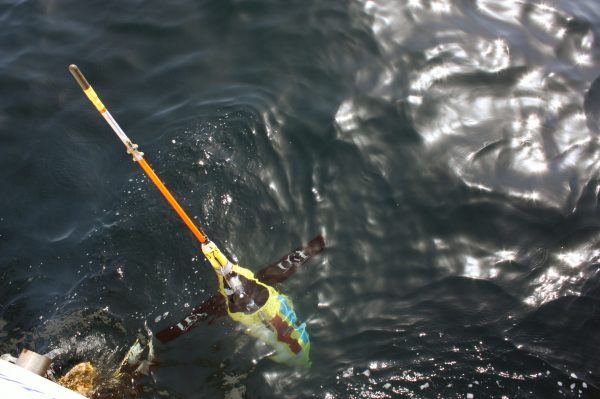 “The impact for us is how rapidly it is changing, putting stress on valuable ecosystem resources that we depend on heavily,” remarks Dr. Queste. “For example, the tuna fishery near Oman is huge and very affected by the growing OMZ which compresses fish into a thinner layer at the surface. If we’re not careful, we’ll suspect there are more tuna (more per unit volume of water), but in reality, there are the same number, simply stressed and squeezed into a smaller space.”

The paper from the team also investigates water dynamics local to the OMZ—an interesting topic that has mostly gone unexplored.

“Persian Gulf water contains more oxygen and therefore mixes with the OMZ and is a dominant control on the resupply of oxygen into the OMZ,” adds Dr. Queste. “The Gulf of Oman is incredibly energetic—the sides are littered with underwater canyons, and the strong winds from the monsoons and from the temperature gradients between the sea and the deserts mean that the ocean currents are incredibly strong and dynamic, with many eddies moving around and bouncing against the sides in the Gulf. These eddies come and grab the oxygenated Persian Gulf water and spread it around the Gulf of Oman, increasing the oxygen wherever it goes. My suspicion is that one of the main ways climate change is affecting the OMZ here is by changing the nature of how much oxygen Persian Gulf water has, how salty it is due to evaporation, and how warm it is, and by changing how it is mixed around.”

To learn more about this important issue, Dr. Queste recommends readers refer to the UNESCO task force GO2NE, or the Global Ocean Oxygen Network. He also hopes new students will continue to join the team and take part in the research efforts.

“If anyone wishes to do oceanographic, climate or environmental research, UEA has amazing undergraduate and masters courses for it—they are genuinely in my opinion some of the best degrees for it worldwide today,” remarks Dr. Queste. “If people want to do PhDs in this topic, they’re encouraged to get in touch!”