Seahorses Return to the River Thames, an Urban Haven for Wildlife 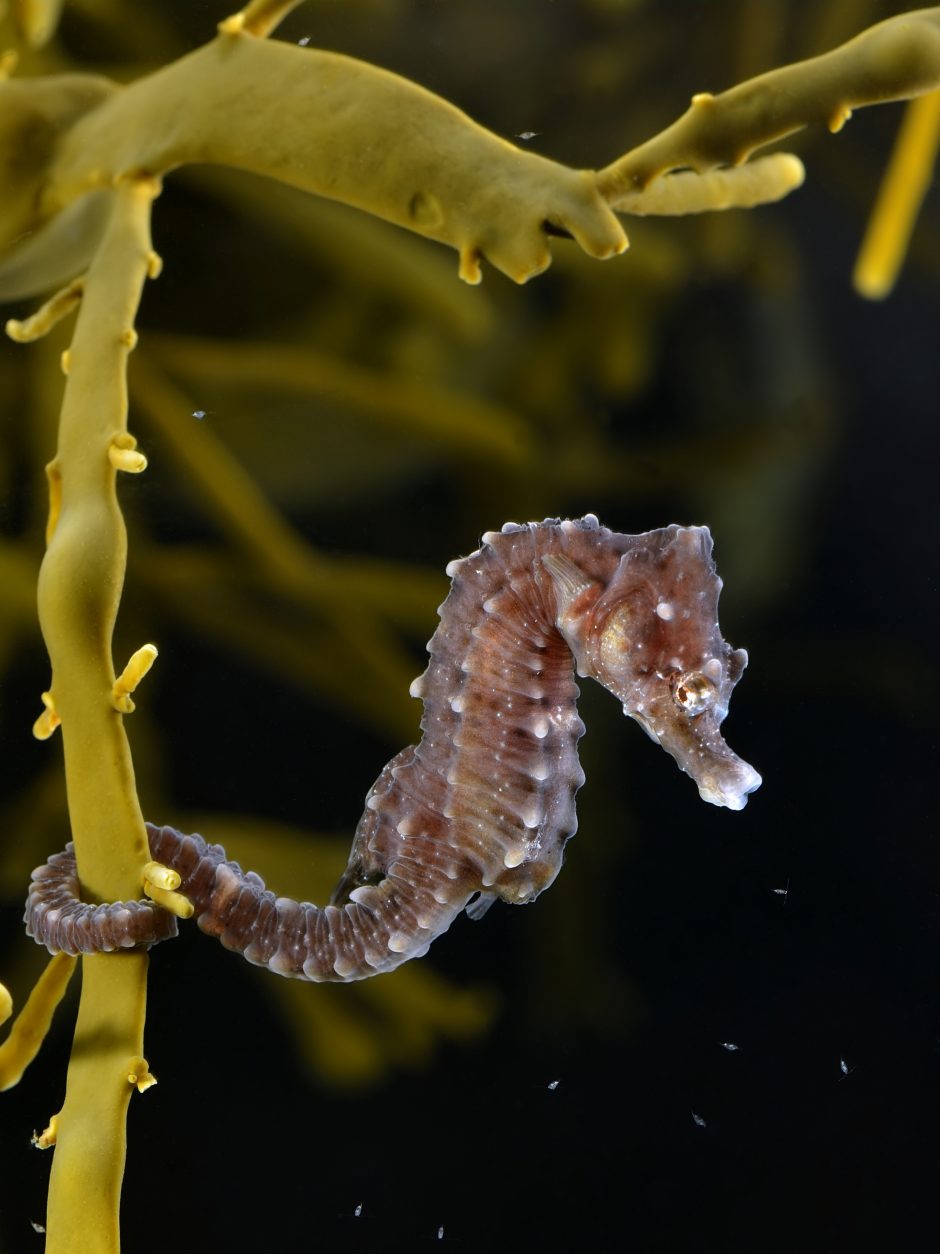 The urban rivers of the world tend to serve humanity, functioning as workhorses that have made trade possible for thousands of years. Perhaps this is why it is so easy to forget that these rivers are also havens for wildlife. The River Thames and its estuary is such a haven, a forgotten ecosystem in the heart of one of the greatest cities in the world. This is precisely why the Zoological Society of London (ZSL) has established its Estuary and Wetland Conservation Program: to raise the profile of these forgotten ecosystems and tackle related conservation issues.

In November 2017, marine biologists from the ZSL reported that they had sighted six seahorses in the Thames over a two-month span, compared with the one or two per year that were sighted before. At this time, the ZSL team is not speculating about why they’ve sighted more seahorses; the uptick may well be the result of an increase in records due to improved surveillance, intensified effort, or other environmental and physical factors—or it may be an actual increase in seahorses in the estuary.

However, the team makes clear one undisputed fact about the sightings: they highlight the importance of the Thames as a wildlife haven. In the coming months, the team plans to repeat its surveys and possibly establish patterns to better understand the actual numbers of the creatures in the river and estuary. They also plan to uncover more details about how the seahorses use the estuary by conducting targeted surveys.

There is method to the ZSL team’s madness when it comes to tracking these seahorses. Showing that they are permanent residents in the Thames and its estuary will have real consequences for the species and the ecosystem.

“Seahorses are often understood by members of the public to be exotic species living in warmer climates, so sharing that these species, with their small home ranges, are most probably resident to the Thames Estuary helps people understand further the importance of the Thames for wildlife,” explains Anna Cucknell, Thames Conservation Manager for the ZSL. “Seahorses are listed as Features of Conservation Interest under the UK Government’s Marine and Coastal Access Act (2009), and they therefore qualify for additional conservation mechanisms provided by marine protected areas called Marine Conservation Zones (MCZ). By recording seahorses in the Thames, it provides further evidence to support the designation of the Thames as an MCZ. Furthermore, the fact that these species are resident to the estuary running through [the] country’s capital, yet so little is still known about their habitats and population trends, demonstrates the need for further research on these species here in the Thames in order [to] develop effective management and conservation of them.”

This kind of designation would have far-reaching consequences for many species, including humans.

“Indeed, the Thames is home to a huge variety of wildlife ranging from the Critically Endangered (IUCN) European eel and over 100 other species of fish of commercial and conservation importance, right up to dynamic top predators such as seals, sharks and porpoise,” Cucknell clarifies. “We consider the Thames an excellent example of a recovered urban estuary—however, although the biodiversity and abundance of wildlife in the Thames is encouraging, we still have a long way to go in regards to pollution and threats from development.” A short-snouted seahorse pulled from the Thames. (Credit: Anna Cucknell)

Pollution in the Thames

There are currently four principle pollutant problems on the tidal Thames: overflows from the aging sewage system; misconnections of raw sewage and runoff from homes and businesses; spills and intentional releases of things like chemicals; and plastic pollution. The original sewage system dates back to Victorian times, and during heavy rain and storm events, overflow of sewage into the Thames is a problem. The Tideway Tunnel, which will remedy this problem, is currently under construction and will be completed by 2024.

The problem of misconnections of runoff water and raw sewage are tricky, because it’s consistently difficult to identify where these misconnections happen in time to alert local water companies.

“ZSL run a large citizen science project called the ‘Outfall Safari’ where we train members of the public to walk along their local waterway monitoring outfalls and flagging up those which are polluting from a misconnection,” Cucknell mentions. “ZSL also runs a citizen science project aimed at tackling the spills and releases issue by monitoring the water quality of local waterways through the Riverfly Monitoring Initiative.”

“Every year the Port of London authority removes 300 tonnes of ‘driftwood’, which is primarily plastic from the Thames,” she remarks. “Nearly half of all the plastics removed are single-use mineral water bottles. The plastic in the Thames washes up on the foreshore and beaches, washes out to sea, or sinks to the bottom of the riverbed. Due to the tidal nature of the Thames and the scour produced by the moving water, much of the plastic is broken down into micro plastics, and these have been found in animal stomachs. In fact, 75 percent of the flounder studied in the Thames were found to have micro plastic fragments in their stomachs.”

ZSL and their partners are working to fight back the ever-rising tide of plastics polluting the Thames. Their #OneLess project aims to reduce the use of single-use plastic water bottles in the city of London, and to prevent them from entering the ocean. The ultimate goal is to move toward a new ‘refill culture,’ in which single-use plastic bottles are no more.

“Furthermore, we are working with the National History Museum and an MSc student from Royal Holloway, University of London, to examine the micro plastic content of the Thames at two sites, across the year and at different depths, to gain our first understanding of how pernicious micro plastics are on the Thames,” explains Cucknell.

One of a kind: an in-depth study of juvenile fish in an urban setting

This most recent sighting of the seahorses was made by an ecological survey team working at Greenwich on behalf of Tideway. Their work supports a much larger, ongoing project.

The urban setting that envelopes the Thames is critically important, not just in terms of the context for the work, but also because urban life and development shapes the river and its banks.

“We also caught one of the short-snouted seahorses during a partnership project, called Estuary Edges, run in partnership with the Thames Estuary Partnership, Environment Agency, SC2 and APEM,” Cucknell elaborates. “This program is examining how softening the edges of the river, through embankments and terraces can benefit wildlife: fish, invertebrates, and plants. This project is especially pertinent in urban estuaries such as the Thames, which have suffered encroachment and hard engineering from development, speeding up the flow of the water and removing the necessary resting and sheltering habitats found in more natural watercourses.”

How does this research fit in with the overall aims of the ZSL? The ZSL is an international charity focused on launching and maintaining conservation programs, but it is also a home for cutting edge scientists and their research. The researchers hold one of their specimens. (Credit: Anna Cucknell)

“ZSL has run a Thames conservation program since 2004, which aims for the Thames to be a leading example for urban estuaries worldwide,” describes Cucknell. “We run projects working on improving water quality, further our understanding and conserving its abundance wildlife and encouraging the public to value the estuary for the services it provides and the wildlife it supports. Furthermore, ZSL founded Project Seahorse in 1996, a conservation initiative which aims to save seahorses, secure the world’s shallow seas and train conservationists.”

Cucknell and her team are producing research that they hope will be useful for other teams around the world.

“Although fish surveys in estuaries have been occurring for several decades, there is very little research focusing on juvenile fish specifically,” Cucknell states. “As such, when starting and planning this and previous surveys, we had to design and commission specialized finer mesh nets for both our mid-channel and foreshore surveys. These new techniques have been drawing interest from various agencies and research groups for use in other estuaries. Additionally, we use the results from our biological surveys to try and influence policy and developers. For example, from our research we created a Guidance Document, ‘Conservation of the Tidal Thames fish through the planning process’, which details how planners and engineers can take river wildlife into account when planning riverside developments.”

This time next year, we may well know more about the mystery of the seahorses’ return to the Thames. If we do, it will almost certainly be thanks to ongoing research from the ZSL.