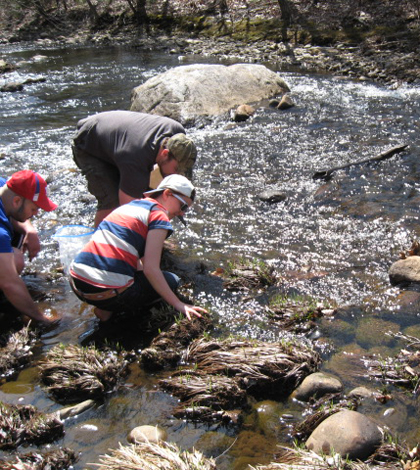 A geology course at a Massachusetts university is looking beyond the bedrock and soil profiles of natural places, asking its students to explore their personal connections to familiar landscapes.

The course, titled “A Sense of Place,” is taught by Tarin Weiss, an associate professor in Westfield State University’s Department of Chemical and Physical Sciences. Weiss asks students to pick a place that has been important to them that will be the focus of scientific and creative investigations.

“They choose places anywhere from their backyard to vacation spots along the coast to deserted quarries in the Berkshires,” Weiss said. “Really a fantastic mix of places they already have some connection to.”

The course is part of a larger place-based education movement that emphasizes teaching students about where they live, not just far-flung places across the country or globe. Though learning about faraway places helps student understand how the world works, Weiss said, investigating the scientific and cultural aspects of places closer to home helps them become engaged citizens at the local scale.

“Trying to plug them into issues within their communities where these places exist is another goal of the course,” she said.

Students are encouraged to visit their site at least once during the semester, which gives them a chance to gather water quality information with handheld meters or collect plants for identification. Because students sometimes choose places hours away from campus, they usually can’t employ the full range of field methods to their sites. Instead, they turn to online resources like the U.S. Department of Agriculture’s Web Soil Survey and the U.S. Environmental Protection Agency’s Enviromapper. The hope is the hands-on experiences better equip the students to understand how scientists gathered the data they find online.

Students observing runoff in a watershed model to give students a 3D sense of what a watershed is and how surface runoff can move material and contaminants. (Credit: Tarin Weiss)

The students compile the data into a technical report detailing the climate, geology, endangered species populations and other scientific aspects of their place and its surrounding watershed. Meanwhile, they’re reading books like “Ceremonial Time” by John Hanson Mitchell, a Massachusetts-based writer who writes about the environmental and cultural changes that have occurred on one square mile of land over 15,000 years.

“He writes these beautiful paragraphs about what it was like during the Pleistocene and these large animals roaming through his back acres,” Weiss said.

The course readings–along with guest speakers artists, musicians and faculty from other departments–help students think about how they can creatively represent a sense of place around their location. Projects for this part of the course have included music, photography and poetry. One student stepped into the mind of a 19th century man who once made a living on what has become a swimming hole.

“She wrote a diary of a quarryman who worked in this quarry that she had gone to for years with friends and family, swimming and picking around,” Weiss said. “She learned that there were people who worked there in the 1800s and there was a mine disaster, and she she wrote a story about his experience.” One student’s diary from the perspective of 19th century man who worked in the quarry where family and friends go swimming (Credit: Tarin Weiss)

Weiss also asks students to think about the future of their places and whether they have any responsibility for preserving them. She said this has lead some of them to think for the first time about the fate of family farms or whether state parks will survive budget constraints. This contributes to an underlying goal of place-based education of raising an awareness among students that they live in these communities and they’re not just passing through, Weiss said.

“I think as children they grow up thinking the adults are doing everything ,” she said. “Suddenly they find themselves being adults, realizing, ‘Oh, I could become a part of something that preserves or changes or makes a difference in my community.”