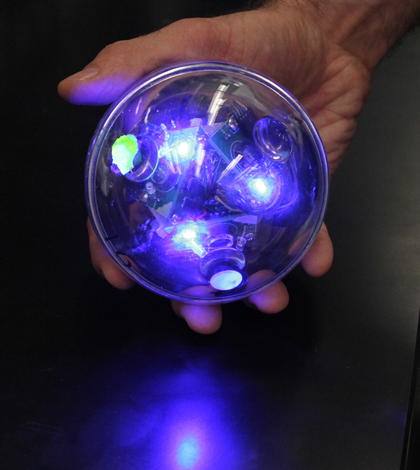 A sensorbot flashing its code (Credit: The Biodesign Institute at Arizona State University)

A potentially game-changing invention to monitor the world’s oceans got its start in Arizona — a landlocked state with no natural lakes and an ocean hundreds of miles away.

Despite the state’s coastal deficiencies, researchers at Arizona State University have developed a communications system based on glass spheres called sensorbots that share data with each other through light waves.

Each device stores an entire monitoring network’s worth of data. If some go missing, which almost certainly will happen, the knowledge is preserved, said Cody Youngbull, research professor at Arizona State.

“The ocean requires redundancy,” he said. “These things could be eaten by giant squid for all we know.”

Development began around 2007 when Youngbull saw a video of conceptual mechanical devices meant to travel seas while logging environmental data. At the time, scientists wanted to make devices that could move in swarms, ping back and forth to each other for coordination, and then ultimately transmit data to receivers above water.

“I thought, ‘If I wanted to make that real, how would I do it?’” said Youngbull. So he began to assemble a team of researchers to improve on the initial concept. “I realized that it’s not something one smart guy can do. It takes an eclectic group of people,” he said. The real discovery, he thought, would be finding a way for the machines to communicate underwater.

Fast forward to the present and the group has developed the devices, which are being marketed as sensorbots. It’s a slightly inaccurate name, Youngbull said, because it implies that the devices can move like robots, which they can’t. Instead, they remain fixed or mill about with wave action. But what they can do is relatively unheard of.

Each sensorbot is a small sphere of clear glass that contains silicon-based photodiodes and receptors. They send out and receive beams of light, and then translate the waves into data sets on their surrounding environments. Each sphere stores a copy of all data individually.

“Our (underwater communication) protocol, we don’t have a name for it yet,” said Youngbull. “We’re the only people doing free-space, optical underwater networks.” A sensorbot prior to deployment at the Axial Seamount (Credit: Allison Fundis/NSF-OOI/UW/CSSF)

When compared to other underwater communication methods, like acoustics, Youngbull says sensorbots have features that set them apart. For one, expanding a network is as simple as throwing new spheres into the water. Each new sphere automatically links up to deployed ones through a flash.

A master sensorbot can be rigged to a buoy or other secure platform so that the network can provide data in real time. Youngbull says these platforms can also be built to transmit network data wirelessly to other locations.

Though sensorbots began as sensing devices themselves, that capability has been scaled back in favor of a port allowing the connection of external sensor packages.

“Trying to do everything is hubris, so we decided to focus on communications,” said Youngbull. “We’re not trying to disrupt (the environmental sensing) industry. We’re trying to become part of it.” Youngbull says the biggest cost of ocean research is access. Cruises can run into the hundreds of thousands of dollars a day and rapidly deployable sensor networks that maintain a permanent presence can save millions.

Typical ocean sensors can cost around $10,000 or more. With sensorbots, arrays of spheres are needed to cover large areas but only a few spheres need sensor packages, which can save money. Still, Youngbull says the price of sensing instruments needs to come down in order to meet the needs of networks in the future.