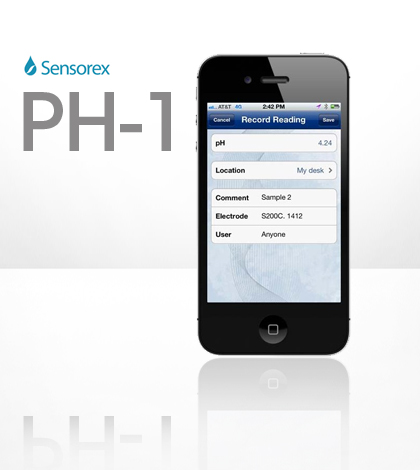 The last couple years or so we’ve been looking at the idea,
said Sensorex Sales Manager Ben Barker

He said the company’s engineers found that a pH sensor would work with the iPhone platform, and the phone’s popularity sold the idea to company executives.

The device simply plugs in to Apple’s wire port. A free application lets users measure pH and temperature, log data and record GPS location. Barker said that the device can replace expensive data loggers and pH testers compatible to said data loggers. It also negates the need for hand-recording data while in the field. The location data gleaned from the iPhone’s GPS can help organize testing across several sites.

The readings and GPS data are stored in the phone’s memory and can be emailed to the user for record keeping. Data storage is limited by the amount of space on the device’s hard drive.

The sensor draws a small amount of power from the phone’s battery. It converts pH signal to millivolts. That signal is then converted from analog to digital, which the iPhone reads.

The biggest difficulty in developing the PH-1, Barker said, was getting properly licensed by Apple. Application licenses cost tens of thousands of dollars and Sensorex had to make sure that they followed Apple’s legal stipulations.

The PH-1 opened up a new market to Sensorex. The firm mainly sells to other manufacturers and vendors that either rebrand the sensors or add them to other products. The PH-1 is sold straight to consumers, many of which are not career scientists. Barker said that pool owners, aquarium enthusiasts, hydroponic gardeners and even meat and cheese makers are using the PH-1.

Though PH-1 customer reviews are generally good, there is one common complaint. “People don’t like to have their phone around liquid,” Barker said.

Future versions of the PH-1 will probably use Bluetooth connectivity to keep phones at a safe distance from water and build compatibility with more cellphones, including the Android platform. Sensorex is also considering smartphone-based sensors for other water quality parameters, including conductivity and dissolved oxygen, Barker said.

The PH-1 module costs $175 and is available with three different pH sensors, each at an additional cost. One sensor records pH, one records pH and temperature and one has a spear tip for measurements in food products.