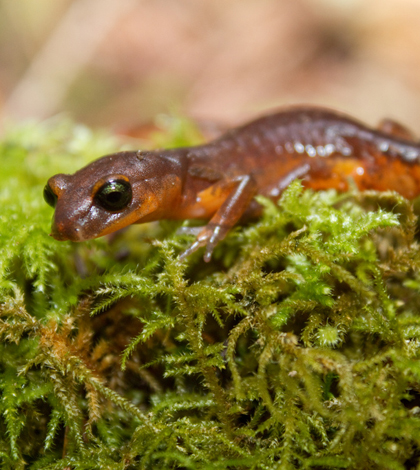 A recently released study on salamanders in the forests of northern California shows that the little amphibians play a surprisingly outsized role in sequestering carbon in the soil before it escapes as greenhouse gases.

The study, published in the journal Ecosphere, found that the salamanders increase the amount of carbon that ultimately makes it into the soil by eating up insects and other invertebrates that convert leaf litter on the forest floor into greenhouse gasses.

The findings are widely relevant, as salamanders are quietly the most abundant vertebrates in North American forest ecosystems. Previous studies of forests in the Northeast have shown that more biomass in a forest is tied up in a single species of salamander than all the small mammals there combined. Despite their abundance, salamanders are understudied and their effects on nutrient and carbon cycling aren’t well understood.

“These organisms haven’t been investigated very thoroughly in terms of what their role is, which is one of the reasons I wanted to do this,” said Hartwell Welsh, a herpetologist with the U.S. Forest Service’s Redwood Sciences Laboratory and the study’s co-author.

In 2007 and 2008, Welsh and Michael Best, then a graduate student at Humboldt State University, set up an experiment on the floor of a mixed conifer and hardwood forest in the Mattole River watershed. Their focus was leaf litter, which is made up of around around 50 percent carbon. When the litter is left alone, the fall rains kick off a chemical process that integrates the leaf carbon into in the soil column.

But the forest floor is also home to invertebrates that shred the leaves, which promotes a decomposition process that releases the carbon into the atmosphere as methane or carbon dioxide.

Salamanders prey on invertebrates like beetles and ants, limiting the number of those species available to shred leaf litter. The fewer shredders, the more carbon that goes down into the soil rather up into the atmosphere. At the end of the experiment, the mesh bags in the salamander enclosures contained roughly 13 percent more leaf litter on average than those in enclosures without salamanders. The invertebrate samples show that the salamanders suppressed numbers of beetle and fly larvae and beetle, ant and springtail adults.

Based on the amount of leaf litter left behind in the salamander enclosures during one year of the study, an estimated 170 pounds of carbon sequestered per acre over the course of a single rainy season could be attributed to salamanders.

If that sounds like a lot, that’s because it is.

“That’s the way we thought too,” Welsh said. “That’s why we were surprised and thrilled with the results.”

The finding that salamanders have a significant role in sequestering carbon comes at time when the world is grappling with rising greenhouse gasses; at the same time, the planet’s amphibians are experiencing dramatic population declines. The causes range from habitat destruction to a fungal disease that has spread across the globe.

“Amphibians in general are taking it in the shorts very badly,” Welsh said.

The ability of amphibians to tuck away extra carbon highlights the importance of conserving the species and their habitats, including the old-growth forests that provide the most suitable conditions.

“They’re the biggest carbon sequestering machines on the planet, and we’re still cutting them down,” Welsh said. “From the perspective of salamanders, that’s a serious impact on the population. But it’s an even greater impact on the ability of this planet to naturally sequester carbon.”