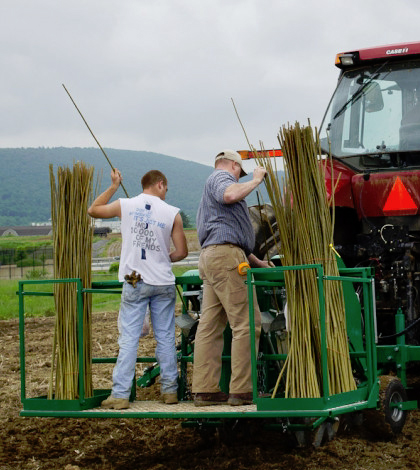 Researchers planted shrub willow seedlings in 2012 on land formerly owned by the State Correctional Institution at Rockview. The biomass crop will regrow and will be harvested every three years. (Credit: Penn State University)

What was once land owned by the Rockview prison facility in Pennsylvania is now a field full of biomass-friendly shrub willow. The plantation was only just harvested for the first time, a milestone toward a broader goal of developing the acreage into a renewable and sustainable biomass crop.

The harvesting was no small feat. After the plants were first put into the ground, Penn State scientists had to wait four years for them to mature enough to be cut. But with that out of the way, the willow can now be cut every three years to provide for carbon sequestration but also better water quality and even biofuel production down the road.

Once it gets up and running, managers at the site are hopeful that it will blossom into a more and more efficient batch of willow. It is already much more efficient, they have found, than a nearby crop of corn that was planted for comparison.

To make that determination, researchers involved with the effort have instrumented the fields with a sonic anemometer to measure the horizontal and vertical movements of wind throughout the region.

“Air is constantly fluctuating. With the speed, we can get the flux,” said Armen Kemanian, associate professor of production systems and modeling in the Department of Plant Science at Penn State. And so he and others use that measurement, at a resolution of once every 20 minutes, to track the exchange of carbon dioxide during the day and night. The same approach, he says, gets used to track the exchange of water. The shrub willow stand at the Rockview site can continue producing biomass for more than 20 years, according to researchers who intend to use it both as a source of renewable energy and as a platform for sustainability studies. They believe it is an excellent site to investigate impacts on soil and water quality, biodiversity, avoided carbon dioxide emissions, and the potential for growing a regional bio-based economy. (Credit: Penn State University)

“One of the reasons that bioenergy makes sense is because it removes a lot of carbon dioxide from the atmosphere,” said Kemanian. “It’s difficult to measure in the soil, so we measure how much carbon moves toward or away from the plant.”

With the same measurements being used at the corn crop, Kemanian has noticed differences between how the two plants perform over time. During the early and late seasons of the year, shrub willows win at pulling in the most carbon dioxide. But during the summer months, whenever the conditions are best for the corn, it pulls ahead.

The real benefits of shrub willows that he sees comes when considering how the plants will impact CO2 concentrations over time.

“The surprising thing is how early and how late willow hangs in there,” said Kemanian. “The total biomass is probably similar and I’m not surprised if corn wins, but willow does so with a third of the nitrogen. It’s more efficient and operates at a much lower cost.”

Because of those benefits, he sees some floodplains as the most ideal locations to plant shrub willow plants. They have all the capacity that is needed to continually take up the nutrients and water in those spots while continuing to grow with ease.

But for the crop that’s growing at Penn State, there are bigger aspirations as part of the Northeast Woody/Warm-Season Biomass Consortium.

“The goal is to separate what we call sustainable landscapes. And we’re not starting from scratch. There are other areas where this has been successful,” said Kemanian. “So we want to replace some crops with energy crops, but at the same time there needs to be a market for the biomass. To grow them, harvest them, transport them, there must be an end user and we can’t control that.”

Top image: Researchers planted shrub willow seedlings in 2012 on land formerly owned by the State Correctional Institution at Rockview. The biomass crop will regrow and will be harvested every three years. (Credit: Penn State University)