In Sierra Nevada streams, researchers on the lookout for drought-threatened fish 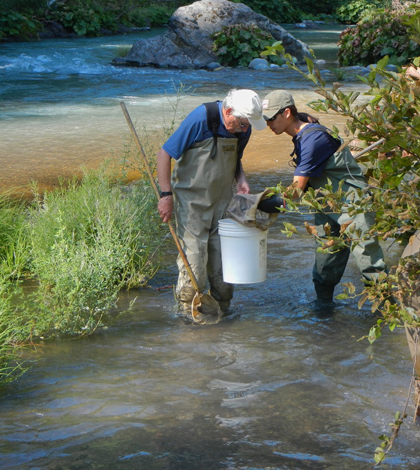 In the parched hills of the Sierra Nevada, researchers are surveying drought-weakened streams to see what effects long-term dryness is having on fish populations in the region. Their findings so far have been less than stellar, with sparse numbers of fish being counted.

Still, as data collection is progressing, the researchers, who work out of the University of California, Davis’ Center for Watershed Sciences, are gathering insights that could aid in conservation efforts that are expected to grapple with coming climate changes.

The purposes of the investigation are two-fold. “If we ever get rain again, we want to see how well these areas are recovering from drought,” said Rebecca Quinones, a postdoctoral researcher at the center and leader of the project. Then, by comparing how the habitats differ from before and after, “can we predict how well they’ll do going into climate change simply by differentiation?”

Quinones is building on considerable work by Peter Moyle, who has studied Sierra Nevada streams and fish for decades. He is one of the group that is going out to sample the streams for temperature, pH, conductivity and dissolved oxygen using a YSI Pro Plus multi-parameter water quality meter. Researchers are looking at concentrations of phosphorus, nitrogen and ammonia as well. For fish counting, the group relies on seine nets for threatened species and electrofishes for others.

“The goal is not to kill anything, and we try to minimize mortalities as much as we can,” said Quinones. “The ones that we do collect for teaching purposes are kept in conditions similar to the ones where we find them.”

And by comparing those conditions to the ones that Moyle documented in the past, researchers can see changes in recent years: Warmer water temperatures have been recorded in some areas, while others have shown water losses with ongoing drought conditions. Quinones is comparing findings to those from studies dating back to the 1970s as a baseline, and though data collection is still underway, there are some findings to report.

“We’re seeing that drought is exacerbating what’s been going on,” said Quinones. Spring-fed systems, which keep more stable flows, are doing better. Some points in the north are also doing better, all the way down to Bakersfield. “But the San Joaquin Basin is much drier than the rest of the state.”

The findings so far are more California-centric, she says, and her research group is partnering with scientists at the University of Evora in Portugal who are studying streams there to give the work more international applicability. So in addition to comparing past conditions in California to present-day changes, data will also be used to see what role land-use plays in affecting stream health.

“The (Mediterranean) climate is very similar (to California’s). There are wet springs, dry summers and early falls,” said Quinones. What is different is how the land is used. In Portugal, the agricultural operations are much smaller, usually family-oriented farms that grow crops like cork and olives. Population centers are smaller too. “And that’s fascinating because that’s what shapes the habitat.”