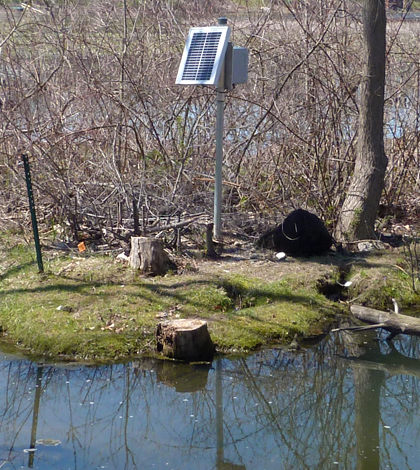 A monitoring site at a major inflow to Sippo Lake, on its southern end. (Credit: Daniel Kelly / Fondriest Environmental)

Sippo Lake in Stark County, Ohio, has long had a sediment problem. Years ago, in the late 1990s, it was so choked full of sediment that its max depth was only about 4 feet.

Because of the extensive silt that had practically filled the lake in, officials with the Stark County Park District opted to have it dredged through 1997 and 1998 and nowadays its depths have much improved. But as for the sediments coming in, that’s still an issue that managers are working on.

In a recent visit, the Environmental Monitor got a chance to see how park officials are studying Sippo Lake’s sediment issues as well as some of the moves they’ve made to address them. A big part of the push, in addition to collecting data, depends on involving teachers and students from local high schools and colleges to create place-based learning opportunities that nurture local interest and support of the lake and its surrounding watershed.

“Our hope in the long run is that projects like we’re doing here lead to more and more place-based research here locally,” said Nick Morris, education department manager at Stark County Park District. “We’ve got six higher-ed institutions in Stark County and we want them collaborating on research projects as much as possible.”

We caught up with Morris and Robert Hamilton, an aquatic ecologist at Kent State University, while the two visited a site at the lake’s southern end where it gets a lot of water flowing in. At this site, there are three tile drains, one of which is large enough for someone to crouch through. We had been tipped off before driving to the spot that it’d be easy to see the sediments coming in. And we really weren’t disappointed given all the gravel that we saw in the pool beneath the drains. All of the water that flows through creates that, especially during storms, Hamilton says.

“The water comes in with such force and you’ll see the bottom there is primarily gravel and fine sand. You can see where it has cut a channel. … It’s digging a hole new channel,” said Hamilton. He points out that the pipes do the job that engineers meant them to do in taking runoff from the residences and commercial properties nearby and pushing it away. But unfortunately the big pipes don’t really serve the lake’s inhabitants as well.

At this inflow, park managers have placed a monitoring station that keeps tabs on the sediment loads pulsing into the lake. Its base is a solar-powered NexSens 3100-iSIC Data Logger, but most of the important readings come from an In-Situ AquaTROLL 400 Multi-Parameter Probe deployed at a depth where it will always be submerged.

Its guided and given more stability in that effort by two metal fence posts stamped into the channel. But a custom-built deployment pipe is important here too. It’s made of drilled-through PVC, a few screws that make it easy to remove the sonde and a bent nail at the bottom that serves as a stopper to keep the AquaTROLL secure.

“I have innovative construction skills,” said Morris, remarking on things that he builds. “They’re never built to last but they solve the problem.”

From there, the channel doglegs a little to the left before whipping back around and entering Sippo Lake. But before making it out into open water, park managers have another trick up their sleeves. At this inflow, as well as others for the lake, they have installed screens of coconut baffles.

The innovative idea is that the baffles help to catch sediment heading toward Sippo Lake. Then, as the baffles decompose, they create new areas to support the growth of aquatic plants that can cut through the sediment loads on their own in the future.

The success of the move is yet to be seen, and Morris tells us that he and others plan to revisit it in the near future. But it lines up well with the goal of alleviating and tracking the sediment loads that make it into the lake.

“What we’re trying to do with this data is figure out what the water is like when it comes into the lake and then we have our other monitor is set up just on the other side of that picnic shelter and play area in an outlet stream,” said Morris. “So what we’re trying to see is what does the water look like when it comes in and what does it look like when it goes out and be able to kind of tell is our lake serving its purpose for protecting the watershed, taking care of sediments and other things.”

Some of the preliminary data collected so far point to there being some major issues, Morris says. And some really important things are happening ecologically. But it seems so far that the lake is doing a good job of improving water quality. But there’s of course more than one side to Sippo Lake and each one has different things going on.

The site we’d just visited was on the southern end. At the lake’s north is where the main park buildings are. And on the eastern side, there is a tiny inlet that doesn’t contribute anything to the lake unless there’s a lot of rainfall.

The lake’s western side, however, is home to a recently restored wetland that plays a big role in Sippo Lake’s sediment woes.

A little less than a year ago, park managers worked to re-route water pulsing through a tile drain back to where it needed to go. It was being diverted down a ditch and away from the wetland, which had starved the 13-acre space over time of the flows it needed to survive.

About 900 cubic yards of dirt was excavated out of the center of the wetland. Ten-thousand native plant plugs were put in, and numerous invasive plants were pulled out, the likes of reed canary grass, buckthorn and garlic mustard. And then a new structure was put in near the drain that made it so the water goes to the wetland first and then to the lake.

At this spot, Hamilton regularly checks the water for pH, dissolved oxygen, nitrates, phosphates, conductivity, temperature, salinity and oxidation-reduction potential. The idea is ultimately to see how the wetland is impacting water quality.

“You can read any book and it will say road runoff contains X, Y, Z. Wetlands should clean it,” said Hamilton. “But what’s really happening right here? I mean I live five minutes that way so this is what’s happening in my neighborhood.”

Going along with that sentiment, the wetland site has become increasingly important for supporting the place-based thinking that park managers are trying to encourage for members of the surrounding communities. Some 30 teachers from nearby institutions have already toured it to learn how they can include what they saw in their lessons.

Morris says that he wants students, as well as many teachers and locals, to start thinking about watersheds like communities, instead of in terms of school districts or neighborhoods. His preference would be for folks to consider what natural communities there are and see that important things like water don’t really care where we live.

“It travels between very wealthy subdivisions and very impoverished urban communities and very industrial areas and then very rural farm areas. It’s water,” said Morris. “So something that is so central to our existence really transcends any sort of boundary that we try to create for it. If we can have students start thinking about their natural communities, their own personal identity and role within their community can change as well.” In the future, perhaps after about a year’s worth of data has been gathered at Sippo Lake’s southern end, park managers may move the station to the wetland so that they can continually capture what the water quality is before it enters. This would allow them to figure out exactly what effects the restoration project has had.

But in the more immediate future, there are plans for expansion.

“We have a partnership with our local education service center which serves all of the county schools. We are doing a water quality teacher training that we’ve been doing throughout this year, so they’re looking at how to use this data for unit development, course development, in their schools, with middle school and high school kids,” said Morris.

Officials at the service center are planning to put in another two monitoring stations at locations elsewhere in the county. And then the teachers will have access to data from all of the stations to use in their classrooms.

Those two new stations will likely go toward the northeast corner of the county, near the Mahoning River drainage. It’s an area dominated by rural and agricultural lands and drains differently than the watershed around Sippo Lake.