Size Them Up With A SondeCAM Underwater Fishing Camera 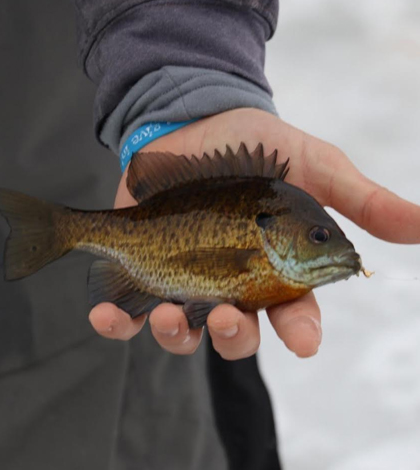 Jeff Elliott with a bluegill caught while ice fishing. (Courtesy of Jeff Elliott)

We’ve all felt the frustration of weeding through a school of dinks to catch a “keeper.” Often the small fish outnumber the bigger ones and they are typically more aggressive. Sometimes there’s no choice but to deal with it, as is often the case with open water fishing. However a frozen lake involves a vertical presentation and a stable platform, it’s a perfect situation to pick and choose which fish you want.

Once you locate a school and get set up it’s time to start sizing them up with a FishSens SondeCAM underwater fishing camera. It can be mind-blowing just how big some of these schools of fish are and also how outnumbered fish of a desirable size can be. You’ll be playing a cat and mouse game with the fish then, picking and choosing which fish are big enough to take to the top of the ice. However you don’t want the smaller fish to completely disappear. The more fish that are down there, the bigger the competition factor is, and the easier it will be to get bites.

One thing that can be tricky is estimating just how large a fish is. If I can I’ll catch the biggest one I can see down there. Other times the bite may be tougher and you can’t be that picky. You’ll have to look a little more carefully for clues that determine if a fish is big enough for your bucket. Sometimes there will be weeds or some other structure you can compare the fish too. Another good thing is to look at the size of the fish compared to your jig. But I often spend the most time looking at the features on each fish. For instance, on a bluegill the bigger the “ear” is, the bigger the fish is. Also look at the lips on a fish, they’ll often be more pronounced. If you see a fish with a “gut” it’s much more likely it will be a big one. Smaller fish are typically more streamlined as they haven’t had time to get chunky yet. Color can be another tip off, juveniles are typically less colorful than mature fish in a species like bluegill.

Those are just a few of the clues that can be used to your advantage when it comes to sizing fish up. It’s just one of the many ways using a SondeCAM on the ice can improve your chances for success. You’ll be catching the right fish and hitting your limit faster than ever before.