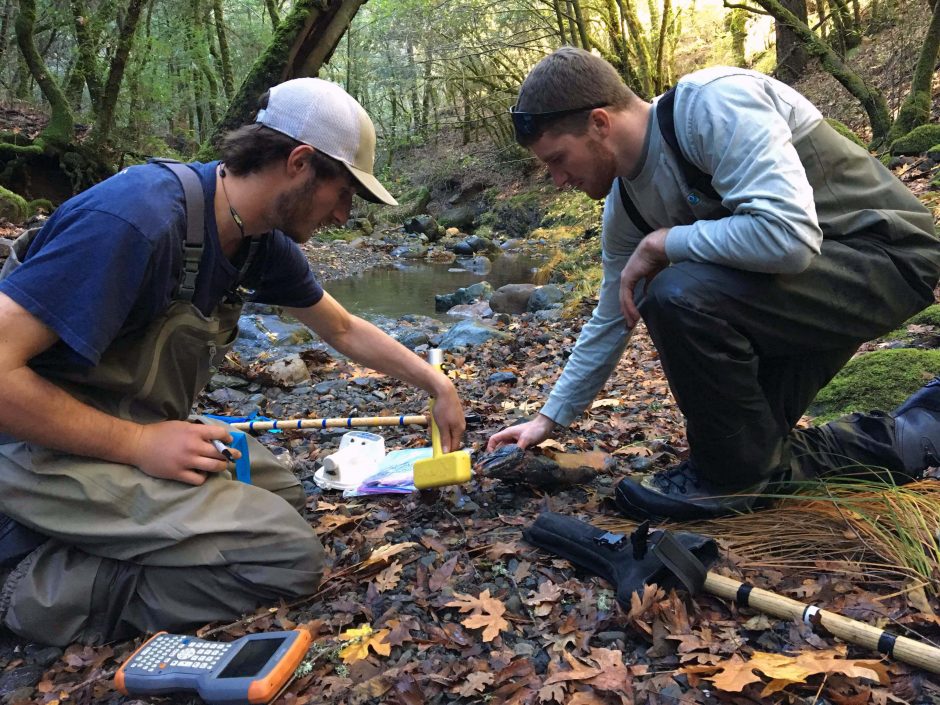 Recent research led by California Sea Grant Extension Specialist Mariska Obedzinski reveals that even small amounts of running water in coastal California streams can mean survival instead of death for juvenile coho salmon. In fact, less than a gallon per second allows the young salmon to persevere through the heat and aridity of summer by keeping pools interconnected.

A gallon per second may sound like a lot of water, but in the context of a stream or river, it’s negligible: “It is approximately 2.5 average garden hoses (all the way on) running through the stream channel,” clarifies Obedzinski.

The peaks and valleys of saving Russian River coho salmon

Since 1996, when Russian River coho salmon were listed as threatened, various conservation plans for the species have been tried—mostly without much success. By the early 2000s the species was in more serious trouble, and by 2005, they were endangered. That year, scientists monitoring the population observed fewer than 10 of the fish returning to the annual spawning grounds in the Russian River.

To rescue the species from the brink of extinction, federal, state, and local agencies collaborated on a conservation hatchery program. The aim of the program was to breed healthy fish and release them to hospitable locations to maximize their chances of survival. California Sea Grant established a monitoring program as part of the hatchery plan to track fish released from the hatchery and study which factors were hampering the recovery of the coho. Monitoring for this effort helped identify critical coho streams that are flow-impaired, including: Dutch Bill, Green Valley, Mill and Grape creeks. 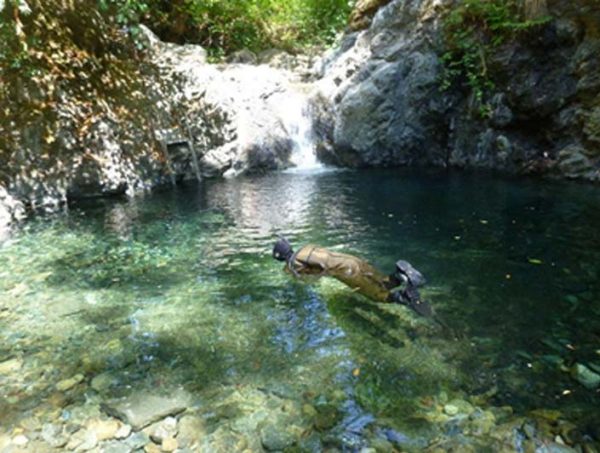 “These streams were then chosen by the Coho Water Resources Partnership, a collaborative group funded by National Fish and Wildlife Foundation to address the low-flow bottleneck for Russian River coho salmon, because they are critical for the recovery of coho salmon in the Russian River, yet are flow-impaired,” details Obedzinski.

The team also collected stream temperature data by deploying a continuous temperature logger in each of the studies reaches. In the early morning hours of each survey, the researchers collected dissolved oxygen data from each pool using a handheld DO logger. They also took measurements of length, average width, and average depth to estimate pool volume for each habitat unit.

“We used an individual-based mark-recapture approach using passive integrative transponder (PIT) tags (the same microchips that are used to track pets),” Obedzinski describes. “We inserted PIT tags into individual coho salmon, and then we tracked them in the stream over the summer using a portable PIT tag detection wand that we could wave through the water. For survival estimation, we used the robust design in Program MARK which allowed us to include environmental factors as covariates and test their relative influence on survival.”

The monitoring team discovered that low streamflow during summer’s dog days is among the greatest barriers to coho recovery. Although hatchery juveniles that are released in the fall have been observed surviving the winter in the streams, migrating to the ocean and returning to the streams to spawn as adults, the dried out waterways prevent many of their offspring from surviving the summer, and the life cycle is broken.

“When working at such low streamflows, measuring discharge accurately was extremely challenging,” remarks Obedzinski. “Identifying whether pools were connected or not was a useful alternative metric to streamflow that turned out to be even more important for fish survival than absolute streamflow. To document the time of disconnection in a given riffle/pool  complex, we found game cameras aimed at the riffle/pool complexes to be very useful.”

Because low water levels threaten the survival of the fish, relocating fish to areas with more water is one of the strategies that the experts running the hatchery employ. It’s a time- and effort-intensive process but has been essential to keeping the species out of greater danger.

“In early June, a team of biologists from California Sea Grant, the California Department of Fish and Wildlife, and the Army Corps of Engineers relocated about 1,200 stranded juvenile salmon, greatly improving their fate by moving them to a location in the watershed that is known to remain wet all summer,” explains Obedzinski. “However, relocating fish is just a band-aid solution to a problem that needs a long-term solution. While it improves the chances that the rescued fish will survive, there are countless others that are stranded each year because no one is there to observe the pools drying and there are not enough resources to move all of the fish that are found stranded.” 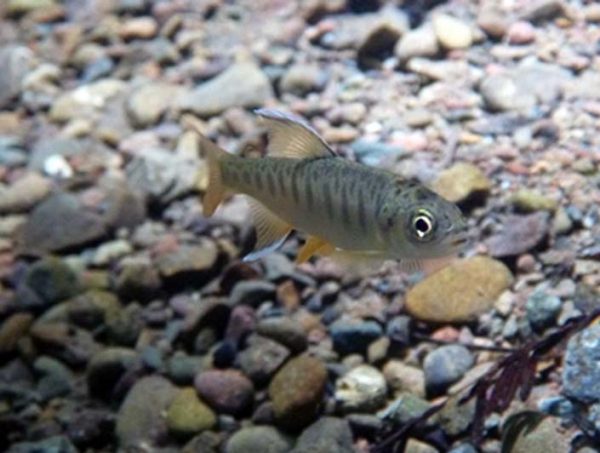 In the meantime, the experts are faced with even tougher questions, including how much additional water the salmon need, and where that water might come from.

“The long-term solution is to work at a watershed-scale to reduce and better coordinate our water use to replenish the water table and keep streams flowing during the summer season,” comments Obedzinski. “The Coho Water Resources Partnership is working to find alternative ways for landowners to acquire the water they need while increasing the amount that flows through the streams. Examples of projects include rainwater catchment systems, water storage tanks and ponds, efficient irrigation systems, coordinated water withdrawals, and frost protection fans.”

California is no stranger to drought, and given the state’s booming economy and population growth, water is an even more limited resource. However, the actual amounts of water that can save this species are relatively modest. Whether that will be the case for other species remains to be seen.

“We have observed other aquatic species in drying pools as well: steelhead, Chinook, sculpin, roach, tadpoles, newt larva, and aquatic invertebrates,” remarks Obedzinski. “We expect the problem to increase with climate change and an increasing human demand for water during the dry season.”

For now, this research is allowing managers to make smarter decisions about water and wildlife.

“This work underscores the importance of considering the size, character and geomorphic context of watershed when considering different flow management actions,” comments Obedzinski. “Existing flow models that predict fish habitat are based on larger stream systems and don’t hold true in the small intermittent streams typical of coastal California. More studies like these that link flow-related variables to direct biological responses are needed to inform managers, especially in the face of increasing drought due to climate change and an increasing demand for water with population growth.”

“Re-purposing even a little bit of water back into the streams can improve the fate of aquatic species, and simple actions on all of our parts, like converting to a drip irrigation system, storing water in tanks or putting in drought-tolerant plants can make a big difference,” adds Obedzinski.