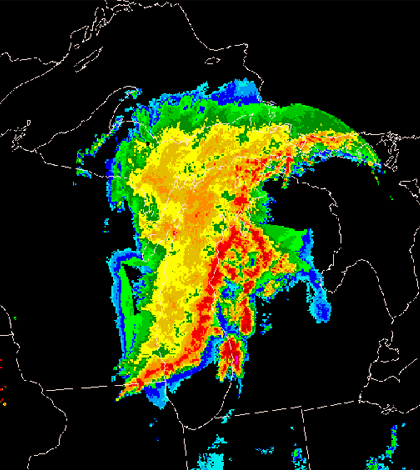 Radar on May 31, 1998 showing a meteotsunami created by a line of storms. (Credit: NOAA)

Though it may seem like the Great Lakes might be too small to support tsunamis, new research led by scientists at the University of Wisconsin – Madison has found otherwise. Researchers at the school and their colleagues are calling these smaller tsunamis “meteotsunamis.”

Meteotsunamis are formed by weather conditions, hence their names, unlike regular tsunamis that are typically brought about by earthquakes. The waves from these smaller tsunamis are not as large, but can still reach considerable heights.

In one example, scientists involved in the work found a related wave to be around nine feet high by looking at historical data. It was recorded in May 1998, when a massive, severe weather event impacted Lake Michigan.

Top image: Radar on May 31, 1998 showing a meteotsunami created by a line of storms. (Credit: NOAA)