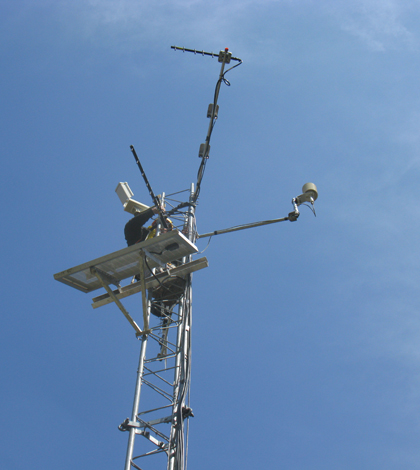 There’s something growing in the United State’s Northern forests: a vision for a cross-country network of forest sensor stations delivering high-quality data to anyone who wants it.

Today, the so-called Smart Forest Network provides hydrological and meteorological data from just three sites the U.S. Forest Service’s Experimental Forest system. But as the program continues to grow, the network will provide consistent measurements that will make it easier to see how forest ecosystems function and change across the country’s small watersheds.

The sensors are already installed at many experimental forests, but tracking down and working with that data isn’t simple for researchers interested in studying multiple sites, according to John Campbell, a research ecologist with the U.S. Forest Service.

“They’re not collected in a common format. The units are all different. You would have to contact individuals at the site to try and get the data,” Campbell said. “Even though the data are being collected, they’re not really in a form that’s all that usable.”

The Smart Forest Network has begun to address those problems at the Hubbard Brook, Fernow and Marcell Experimental Forests in New Hampshire, West Virginia and Minnesota. A clearing in each forest hosts sensors measuring precipitation, solar radiation, wind speed and direction, air temperature, relative humidity. Additional sensors in the soil measure moisture and a temperature profile.  Webcams at the stations record images to track phenological events and upload data to the Phenocam Network. They’re also tracking flows in nearby streams. The measurements are posted online and available to anybody just as soon as the data make it through the program’s quality control process, which amounts to a delay of a few days. Getting the quality control right has been an important part of the development process, Campbell said. They’re running an automated quality control system that performs tests and flags issues with the data for technicians to check.

“I don’t think we’re ever going to get to the point where we totally remove humans from that process, but this is a much more automated procedure,” he said. As the program looks to expand, they’ll work with some sites are well equipped to move into the Smart Forest fold. Others could use significant upgrades. The Forest Service has been slow to update monitoring equipment at some long-term sites because what they’ve been using has worked well, Campbell said. And frequently switching instruments can threaten the integrity of a dataset that spans several decades.

That means that some forests are still using chart recorders, data-logging mechanism is basically a pen that writes to a moving piece of paper.

“You’ve probably seen them in museums,” Campbell said. “This was the technology when these sites were first established.”